A Fourth Viral Year For The Red Cups Countdown 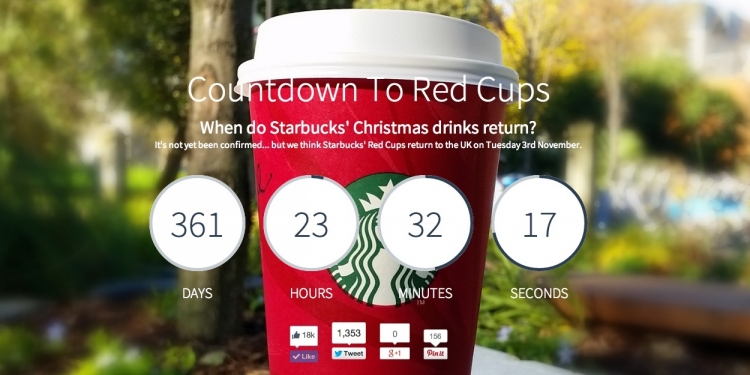 One sign that Christmas is getting closer is when Starbucks' range of Christmas drinks return to their coffee shops and for the last few years Revzo has been helping coffee lovers get into the holiday spirit.

We built countdowntoredcups.com back in 2011 and within a few days of launching the site it was ticking over with a couple of hundred visits a day and appeared high in Google for Red Cup related searches, beating Starbucks' own pages.

It only took about five days for the site to get its first bit of attention. It was discovered by two radio presenters from british radio station, Xfm who shared the link on their Twitter accounts and also mentioned it on air, the first sign that it was going viral. Obviously this on air mention created a midweek spike in traffic, only to be followed up by another spike at the weekend when the site was mentioned on BBC Radio 5 Live.

The site continued its growth in traffic, picking up more likes and more tweets, including lots of retweets of the hashtag #redcupsarecoming.

I was amazed a few weeks later when I had a day which dwarfed the previous highs created by the radio mentions. Starbucks sent out an email newsletters to their subscribers, at the bottom of the email was the phrase "Red Cups are coming" - a tease from Starbucks and enough to get thousands of people heading to Google to find out exactly when they were coming.

With our website ranking higher than Starbucks' official site for Red Cup related search terms, it was countdowntoredcups.com which gave them the answer, and of course they then shared the site via Facebook and Twitter with their friends.

On November 2nd 2011, we experienced our first "Red Cup Day" and it was a huge day for traffic. The site picked up around 1,000 Facebook likes in a few hours and out performed previous day highs in unique visitors by around 10 times. At this point the site was truly viral and it didn't take long for US media to notice. I was contacted by a journalists at Fox News in Chicago who asked if I would take part in a TV news feature about Red Cups and why people get so excited about their return.

In its 50 day existence during 2011, the site was visited over 50,000 times, over 10,000 of those visits were on "Red Cup Day" and in total users generated around 60,000 page views. The site received over 3,000 Facebook likes and was posted to Twitter over 200 but was but was talked about in tweets and retweeted hundreds more times. 54% of visitors to the site came from the UK, 45% from the US - the remaining visits came from 57 other countries around the world.

But this was just the start of it and the site has grown each year since. The biggest problem to overcome was the bounce rate of 82%. Users who visited the site vanished again as soon as they'd seen the countdown, this means they didn't spend much time on the site (average 36 seconds) or click on to more pages (average 1.2 pages per visit).

In 2012 we added a social voting mechanic which allowed users to vote for their favourite Red Cup via Twitter using a hashtag, the site tracked the votes and displayed the results. This increased the page views per visit to 1.5 and in 2013 the addition of regular posts and updates got us up to 1.9 pages per visit.

What about 2014? Well this year so far has already smashed previous years' records. As of today, November 4th we've served 105,000 users a total of 170,000 pages. On Red Cup Day itself we attracted almost 18,000 people to the site but when Americans and Canadians went to their local Starbucks they found their beloved eggnog latte had been taken off of the Christmas menu.

To help our users deal with this pain we launched a petition, this has meant the two days post Red Cup Day have been our busiest ever after the big day and the petition got 2,000 signatures in just over 24 hours, without any promotion or marketing, just a simple link from the home page.

While the website is nothing ground breaking, it servers a purpose to its audience and delivers great audience numbers as well as reasonable ad revenue, albeit limited to the festive season. There's definitely scope to develop the site further in future years and not only continue the growth but accelerate it.