How To Leave Maker Studios 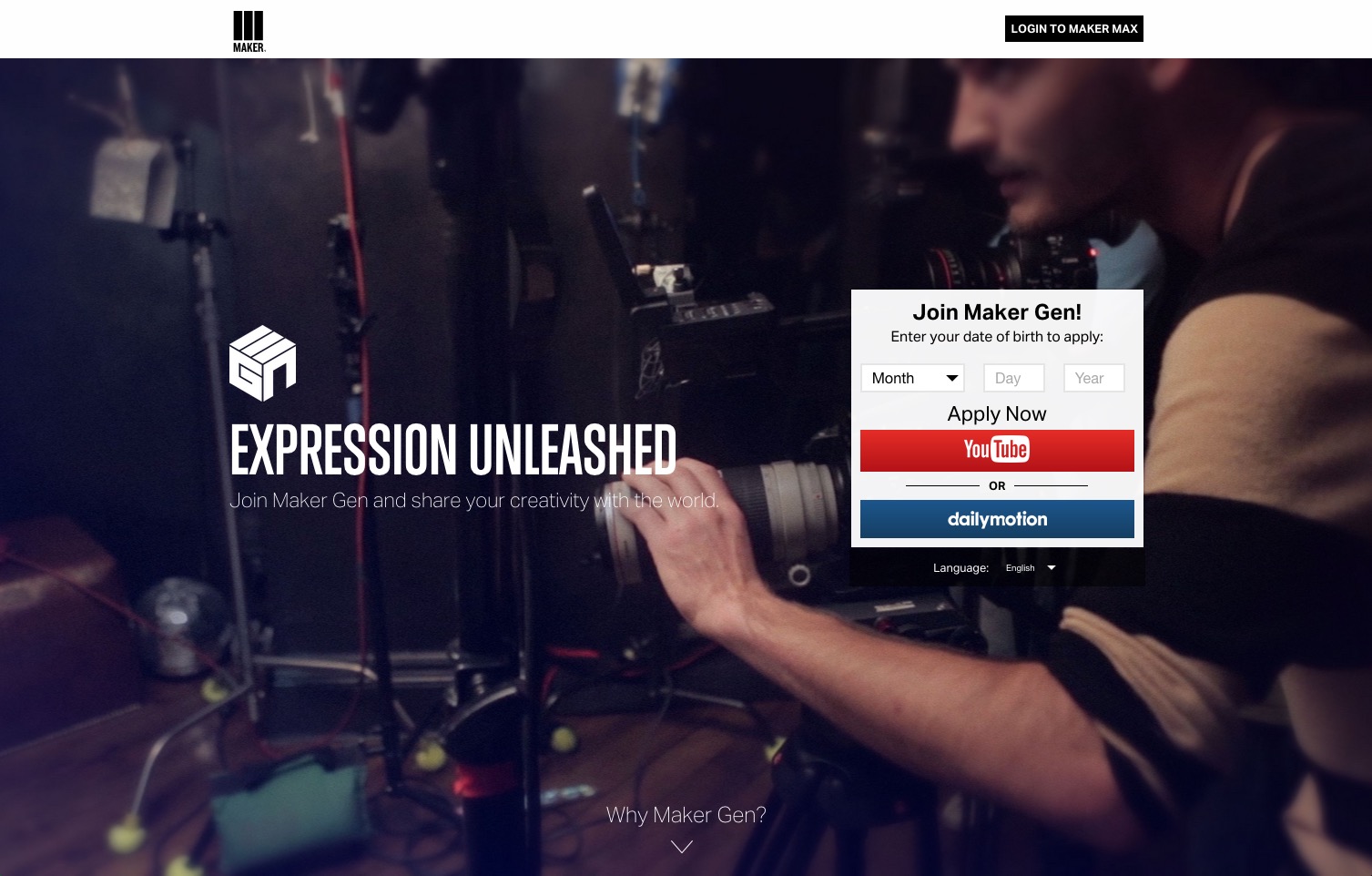 Having been a part of Maker Gen for seven months now, I've seen first-hand that the most commonly asked question on their forums is how to leave.
The year long contract I have with them auto-renews in June, I'm aware of this because I read my contract well but this did also make me aware of the fact that their would be hoops to jump through when trying to leave.  The most significant clause to be aware of is that you need to give notice before the final 30 days of your agreement.
I won't go into my reasons for leaving but I was satisfied with what I got from Maker and think they are a valuable organization in the world of social talent, YouTube management and VOD... but, it's fair to say there are a few horror stories out there and this has made me little bit apprehensive about how easy ending my contract will be, so I've decided to blog about my experience.
First, it should be noted that although the most commonly asked question on the Maker forums is how to leave, this question doesn't feature on their official FAQ page, (side note: perhaps the forums would be a little more useful if they weren't flood with disgruntled members looking to leave.)
Secondly, there's no 'leave' button, there's no end contract option in your settings... the kind of options you find on websites like LinkedIn once you sign up to premium, or cancelling your ongoing Netflix subscription.  So, right from the start it's clear the process isn't easy.
Because of all the uncertainty, I've decided to get in there early, five months before the end of my contract and make 100% sure that the automatic renewal won't happen.  Here's how the journey of leaving Maker went for me.

I logged in to max.makerstudios.com and from the main dashboard clicked on 'support', then clicked on 'create support ticket.'  I wrote in the subject box "Termination Of Contract" and wrote a brief note below which said "Can I please give you notice that I don't wish to continue my contract with you after the end of my current agreement which comes to an end in June of this year. Thanks."

At this stage I was hoping the stories of difficult encounters at contract end were exaggerated or few and far between but, the first reply I got from Maker was an obstacle and in my opinion, an unnecessary step.  The email said:
Thanks for writing in. We will escalate your ticket to another level of support for review, but before doing so, we have to verify your identity.  Please answer these security questions below, thanks!
- Channel:
- Birthday:
- Home address:
Answer to the security questions you chose when you applied (ONE for #1, and ONE for #2)
Security Question #1
•What is your oldest sibling's middle name?
•What is the name of your favorite childhood friend?
•What is your maternal grandmother's maiden name?
•What is your oldest sibling's birthday and year?
•What was the last name of your third grade teacher?
Security Question #2:
•What was your childhood phone number including area code?
•What was the make of your first car?
•What was the name of your first crush?
•What street did you live on as a child?
•What was your favorite school subject?
-Please list a valid reason you're looking to not renew your contract.
Now, this seems a little pointless, I was already logged in to my Maker account when I submitted the ticket, if they trust their systems and security then that should be verification enough, but obviously I have to follow these steps.  Channel name, date of birth and home address are pretty easy questions but the two security questions... how am I supposed to remember which question I answered?  I can't say I always take those questions very seriously, especially if none of them are relevant to me.  I don't know my sibling's middle name, perhaps I answered that at the time and guessed?  I don't know!
So I had no choice but to answer all of the questions to cover my bases, apart from I'm British so I don't know what grade third is so I don't remember who my teacher was, I assumed I probably didn't answer this one first time around.  I wrote the reason for leaving as requested, which again is not necessary, if I am requesting to leave then that should be good enough.  I'm sure it's only for research purposes but they could have asked me as part of a nicer process, like when you close your profile on a dating site and hopefully tick the box that says "I've found love and no longer need access to my account."  ...then it reminds you that 60% of relationships fail in the first year, "come back at any time!"
It's now been a week and I haven't heard anything back at all, not even a confirmation of my last email.  So, I've just sent a follow up email.
Hi, I just wanted to check that you got my last email as it was over a week ago, I have copied and pasted my previous email below.

Four days after my follow-up email I got a reply...
I'm really sorry to hear that you want to leave the network. I truly believe we can resolve any issues you have had with the network and improve your experience with the partnership. For starters, I have reviewed your channel, and it looks like your channel has made lots of great progress and has grown significantly since being partnered with us.
Congratulations! We would like to offer you a 70/30 improved revenue split. Would you be interested in taking this offer? Please let me know! We'd be excited to have you stay with the Maker Studios family. :)
Well, it's odd that he should offer to "resolve any issues" I've had with the network.  When I gave my reason for leaving in the last email, I'd said that I was happy with what Maker had offered me if my situation changed I would love to come back, so it's quite telling that they should defensively reply with talk of issues.  The offer of an improved revenue share was appreciated, however it doesn't change my situation.
So, I replied and turned down his offer and stated that I still wished to give them my notice of leaving.

Now we move forward NINE days!  And along comes the next reply.  At this point I'm really pleased I started this process early because so far this ticket has been open for around 20 days.
This email wasn't very helpful and felt like more delay tactics....
We very rarely offer contracts greater than 70/30.  You do not qualify for a contract split more favorable than 70/30.
Would you reconsider our offer for 70/30?
Of course I rejected this offer for a second time.  This is now starting to get annoying, ending a contract shouldn't be this difficult.  I've followed the process and been clear on my intent.  At this point, rather than offering me a great split of revenue, they should have been trying to convince me of the benefits, asking me what they could change to get me to stay and telling me about their new services such as 'Offers' which gives Creators the chance to benefit for commercial deal made between Maker and brands.

FINALLY, I got the reply I'd wanted....
Your channel has been set to be released from the Network on 6/30/2015.
Any revenue that did not meet the threshold will be paid out the following pay period.
Thank you very much for your time with the Maker Studios family!
So, in total that took 22 days from request to resolution and based on this experience and other horror stories I'm still not convinced that the process will be pain free, so nearer the time I will send a follow-up to check.

Due to the fact that the process so far has been far from straight forward or easy, now I am 32 days away from my renewal date, I just wanted to double check that my renewal had been received and actioned so I created a new ticket and said the following:
I just want to check that as per my previous ticket number #00731976, my contract is due to expire at the end of the current term on 24th June 2015? Sorry to double-ask but you lack of an easy what to leave the network (i.e a "request termination" button in account settings or something similar) makes this a scary time for a Creator who works hard to grow a channel.
It took a little while to get reply to this email, but it eventually came through....
You are confirmed to be released on 6/30/2015.
You can rejoin anytime by logging into Maker Max and re-applying =)
Thank you very much for your time with the Maker Studios family!

Today is the day.  The day my contract with Maker ends, the day my YouTube channel is due to be released from the MakerGen family.  I have to confess, I'd been worrying about this day and this process as there's nothing in the help page or contract which gives any indication of how long it takes for Maker to release your YouTube channel from their network.
I'd also never found anyone's experience of what happens after leaving and how this affects your YouTube channel, well...
At 6pm on the day of expiry my channel was released, hassle free.  Once released my channel defaulted to the state it was in before I joined.  I was back to being a YouTube partner and the channel is linked to my own AdSense account.  If you haven't been a partner previously, after leaving a network you will now be eligible to become a partner and monetize your videos.
I expected some kind of goodbye email from Maker or an email from Google notifying me of the changes to my account.

The final few steps of the process did end up being fairly painless, it was just the method of the initial request which is slow and creates quite an obstacle for someone wanting to leave.  I ended up in a game of email ping pong, it would be much simpler and easier to have a "cancel membership" button.
The reason this process was reasonably pain free was because I was aware of my contract and timings and made the request to leave within Maker's specified time window.
There were only two slightly annoying thing that happened after my channel was released, this isn't Maker's fault but how YouTube works.  Firstly, when my channel was released my earnings history vanished from my YouTube Analytics.  Secondly, all of my videos changed from being 'monetized' to 'not monetized', it's not a huge problem but with 120 videos it took a little while to monetize them all again, even with the batch tool.
Add A Comment
Tags:
youtube