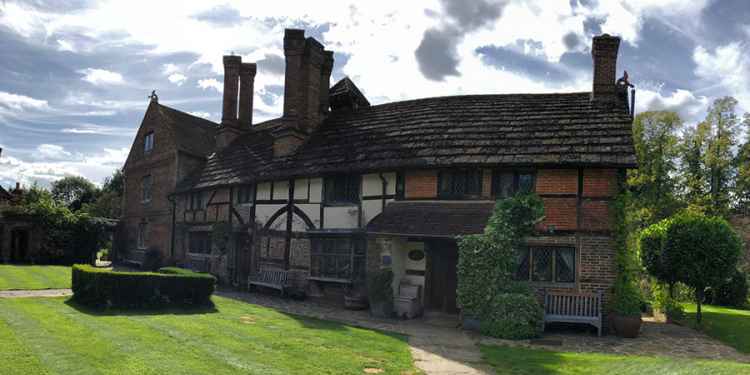 The oldest part of the Clock House was built in the 12th century, it connects via a supposedly haunted panelled corridor to the Georgian part of the house. At the back of the house is a Victorian extension, and to the side Elizabethan outbuildings.

The Grade II listed house gets its name from the small turret on the roof. This once had a clock on it, but in the 1600s it was changed and a bell now hangs inside the turret. At this time the house was at the centre of the hamlet and the bell was used to call people in off the fields.

The house was once an episode location for the 'Most Haunted' team, so clearly it has plenty of ghost stories to its name. We learnt in the episode that the current owner, Fred Batt, was followed home from the nightclub he owned by the spirit of Ruth Ellis, the last woman ever to be hanged in the UK.
Fred said "there's a corridor upstairs you can walk through one time of the year and you can smell roses, you walk through another time and you can smell lavender." Fred says smells are commonly associated with the paranormal, "things like that let you know there's someone here."
He added, "there's a couple of rooms up on the third floor that feel a bit strange when you go in. That's where a couple of children died." Apparently the children died as a result of illness, nothing sinister.
Other reported paranormal activity in the house includes the ghosts of two monks who have been seen in the ground floor corridor that joins the two parts of the house. On the upper floor ghostly footsteps have been regularly heard and a door opens and closes on its own. There's also said to be the ghost of a women wearing a bonnet.
According to Fred, guests who have stayed at his house have told him they've woken up in the night, half opened their eyes and seen a figure stood near their bed wearing a distinctive hat, the type worn by a beadle. Little did his guests know that a beadle, a church official, used to live in the house.
Fred said, "they didn't know about the beadle, I told them after they'd told me they'd seen him."
With so much activity in the house, I asked Fred if he's let any other teams come in and investigate the house since Yvette and her gang. Fred said, "everybody wants to come here but I don't let them in. I don't let anybody in here."

The Clock House Features In