The 10 Best UFO Movies Of All Time

If you can't get enough of flying saucers or you want to give your self nightmares about close encounters or alien abduction, then these are the ten best, must-see films for any ufologist. 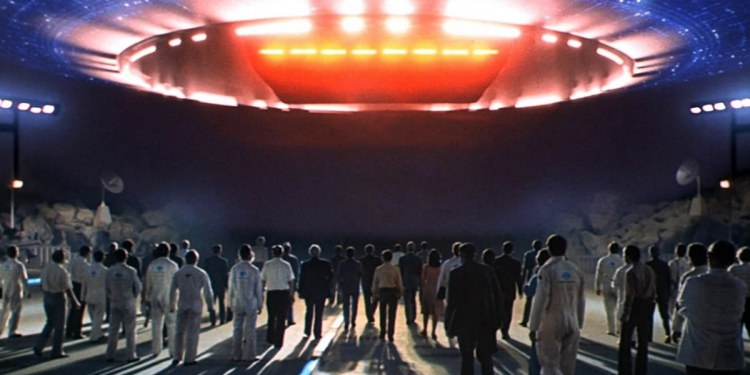 Since the dawn of movies, we've been obsessed with alien visitations and flying saucers going right back to the 1950s with sci-fi classics like 'Flying Disc Man from Mars' and 'The Day the Earth Stood Still'.
Ranging from kids movies to horrors, there's a UFO movie for everyone. They've even been known to keep conspiracy theorists amused too with many of the foil-hatted-community claiming that over the years alien movies have been the government's way of slowly getting us used to the idea of life on other planets... I'm sure this agenda was a billion lightyears away when Steven Spielberg encouraged ET to phone home. 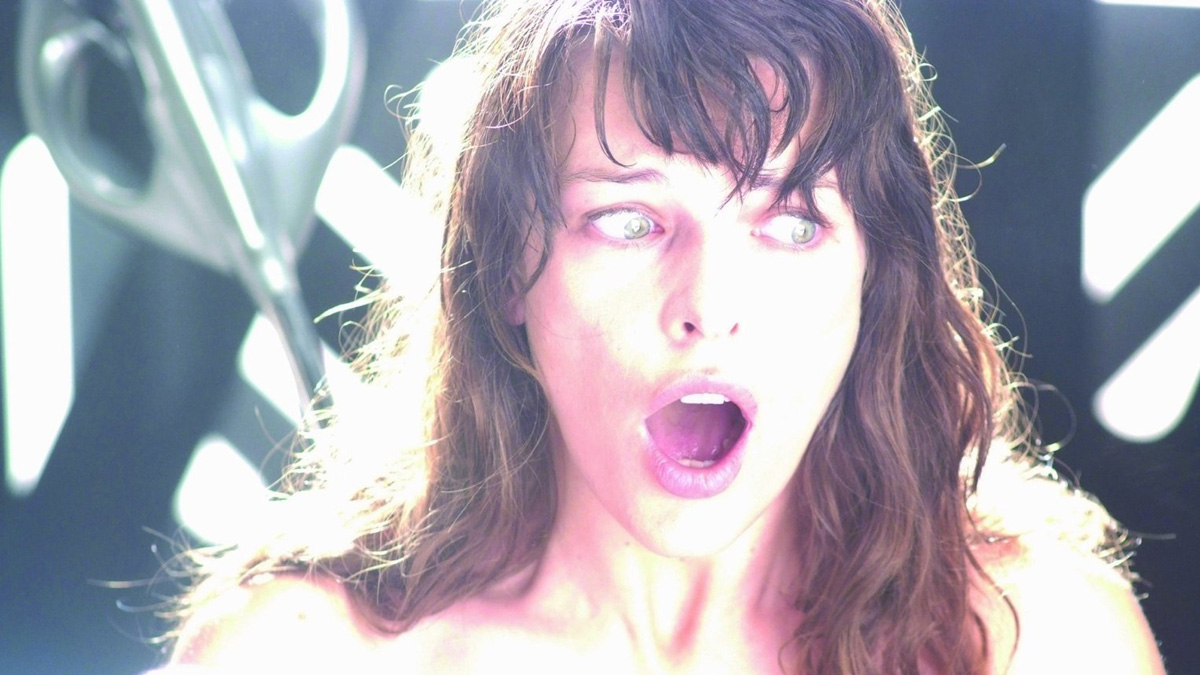 "I'm actress Milla Jovovich, and I will be portraying Dr. Abigail Tyler in The Fourth Kind. This film is a dramatization of events that occurred October 1st through the 9th of 2000."
Dr. Abigail Tyler
From the start the director of this 2009 movie, Olatunde Osunsanmi, wants you to think this film is based on true life events, even claiming that if features "actual footage." It's not and it doesn't, but that's OK.
The movie is set in Alaska in a small town where for the last 40 years there has been a disproportionate number of reports of locals going missing. Despite multiple police and FBI investigations, the nature of these disappearances has never been uncovered.
Dr. Abigail Tyler decides to take matters into her own hands and sets up cameras to film sessions with traumatised witnesses and unwittingly discovered some of the most disturbing evidence of alien abduction ever documented. 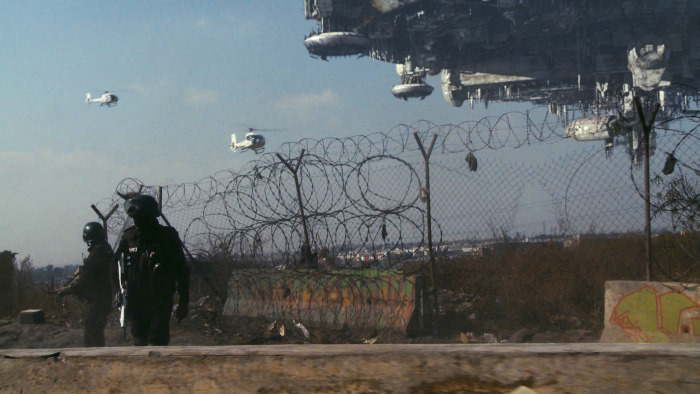 If Donald Trump was ever asked to help an alien species integrate with Earth, then we can only imagine that it would result in something like the plot line of this 2009 movie.
The film is set in 2010, twenty-eight years after a massive space craft visited Earth carrying a species affectionately known as "the prawns." The aliens are now cooped up in a deteriorating, militarised refugee camp called District 9.
The film follows a team from Multi-National United, headed up by Wikus van der Merwe. Their mission is to forcibly evict the population. 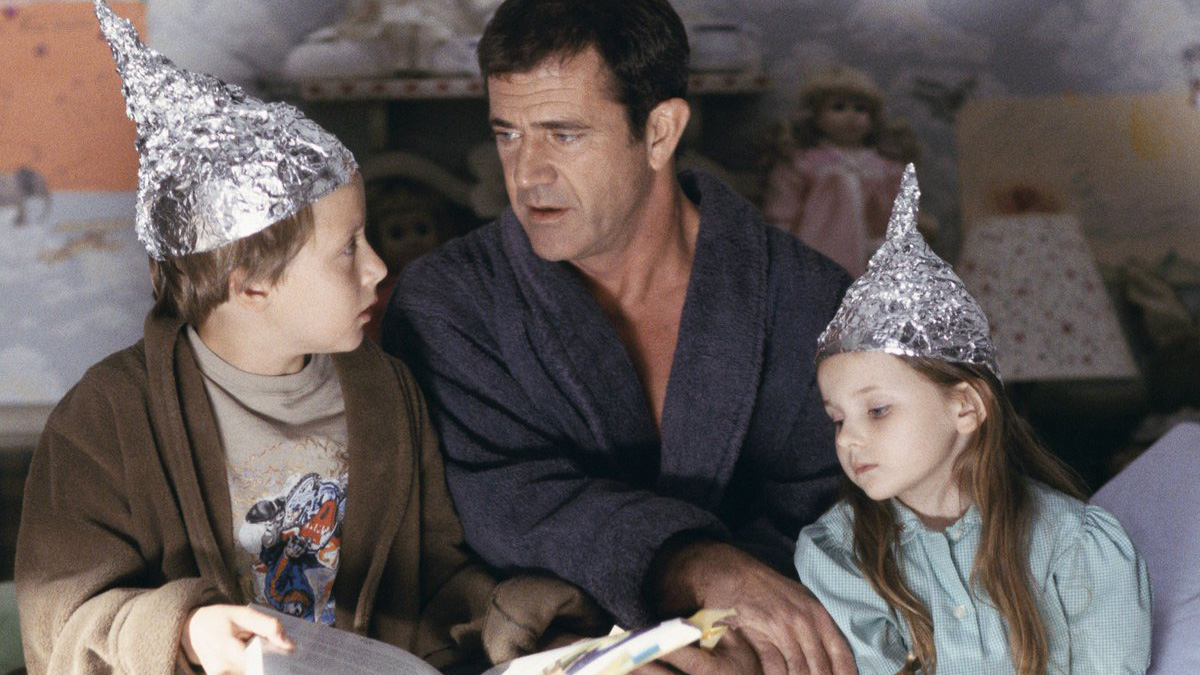 M. Night Shyamalan's 2002 sci-fi thriller starring Mel Gibson deserves a place in this top ten despite being an slightly odd take on a UFO story.
The movie starts with a Pennsylvanian family picking up on subtle signs of extraterrestrial contact including the formation of mysterious crop circles in their farm.
The strange happenings increase as crop circles and reports of sightings come in from all around the globe via world news.
As sightings escalate things get serious and the family is forced to barricade themselves in their basement as the aliens attempt to gain entry to the farm house. 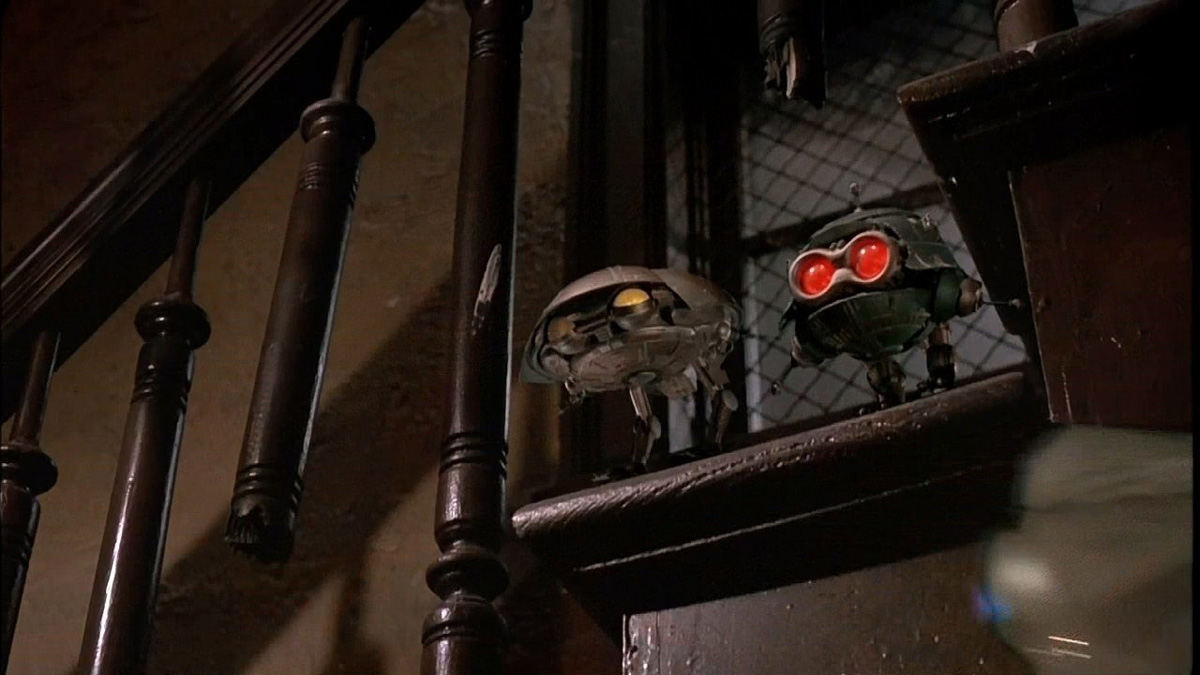 Not all UFO movies have to be about invasions and abductions. In this 1987 family comedy, a group of tenants who are being forced to move out of a soon-to-be-demolished apartment block are helped by some visiting mechanical alien lifeforms.
The pint-sized UFOs fight of a team of thugs who've been hired by the construction company to "persuade" the tenants to leave.

6. Flight Of The Navigator 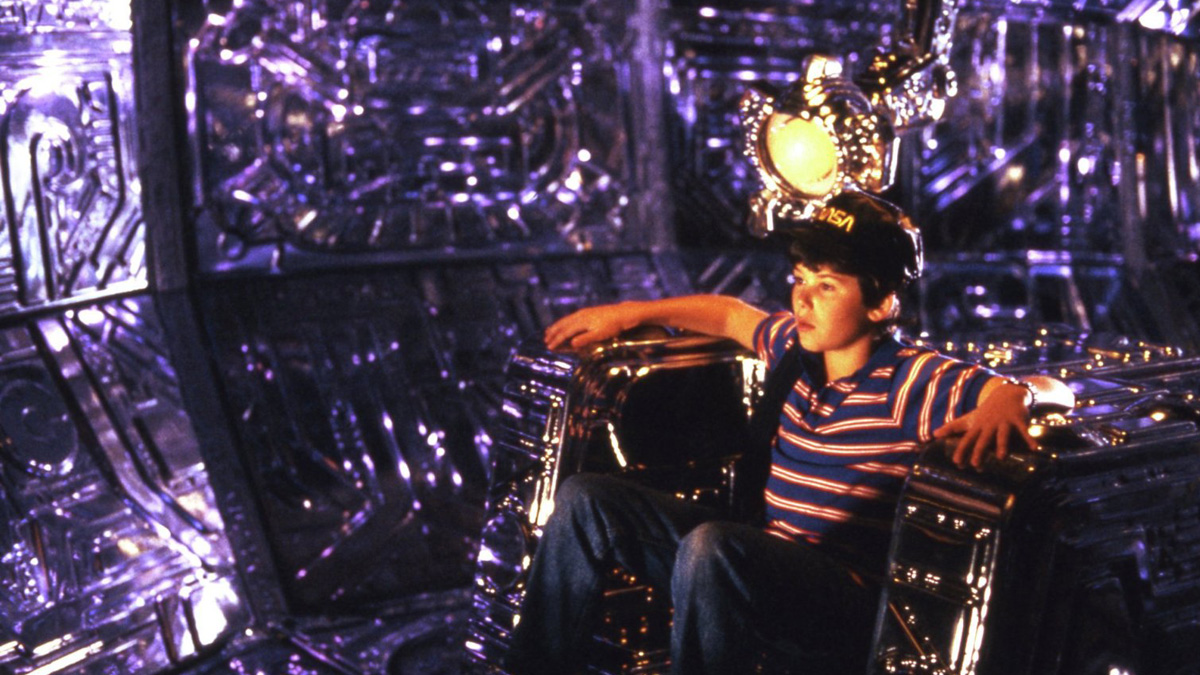 An 80s classic that had every 12-year-old boy wishing they could fly a spaceship like David. He went missing in 1978, only to reappear eight years later and hasn't aged a day in all that time.
With no memory of where he's been, David learns that he'd been taken in a flying saucer which, on the day of his return, has crashed into power lines and had its computer data erased.
Luckily for the lone mechanical inhabitant of the craft, his star charts have been backed up in David's brain so the 12-year-old takes to the helm to become "the navigator."

5. The War of the Worlds 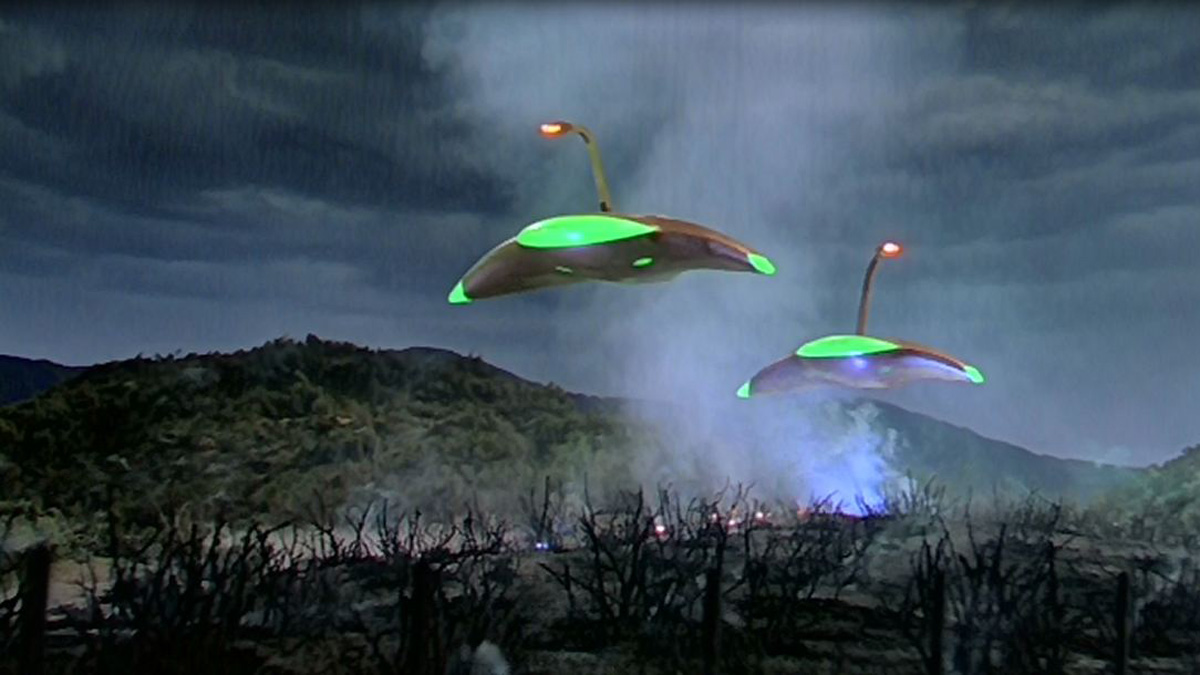 "No one would have believed in the middle of the 20th Century that human affairs were being watched keenly and closely by intelligences greater than Man's. Yet, across the gulf of space on the planet Mars, intellects vast and cool and unsympathetic regarded our Earth with envious eyes, and slowly and surely joined their plans against us."

Dating back to 1953, this classic movie is based on H.G. Well's novel which follows the mysterious events in a small Californian town following the impact of a flaming meteor in near-by hills.
As local scientists flock to the scene to investigate the burning impact site, it soon becomes clear that this is much more than a meteor and that they've unwittingly stumbled upon the start of an alien invasion by an unstoppable and advanced species. 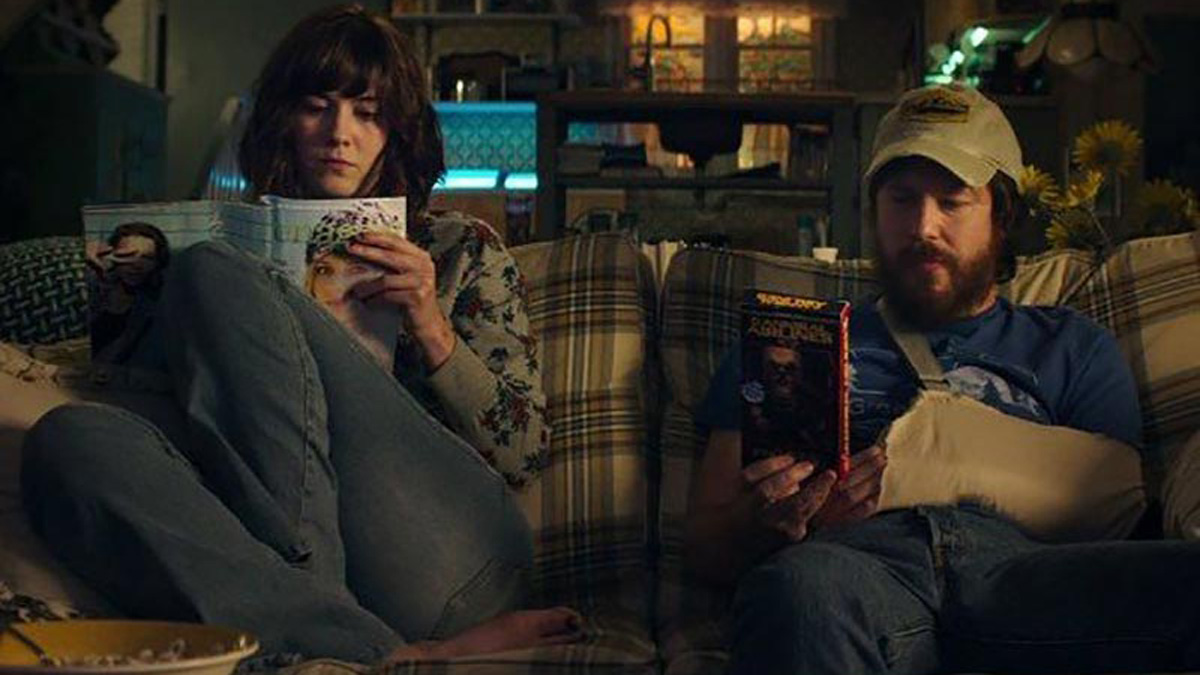 Just listing this movie here is a bit of a spoiler because when watching this movie it seems like anything but a UFO movie. However, anyone familiar with the original 'Cloverfield' movie should know that this follow-up is hiding a big secret.
Although the movie is part of the 'Cloverfield' franchise, the strong characters and compelling storyline soon made me forget that this had anything to do with the 2008 found-footage movie in which New York is under siege.
In this 2016 sci-fi/drama Michelle awakens to find herself in a mysterious bunker after a car accident. She's being held by a man named Howard who breaks the news to her that the outside world has be poisoned and is unsafe. However, Howard's intentions soon become questionable and Michelle is left wondering if it is better inside or out there. 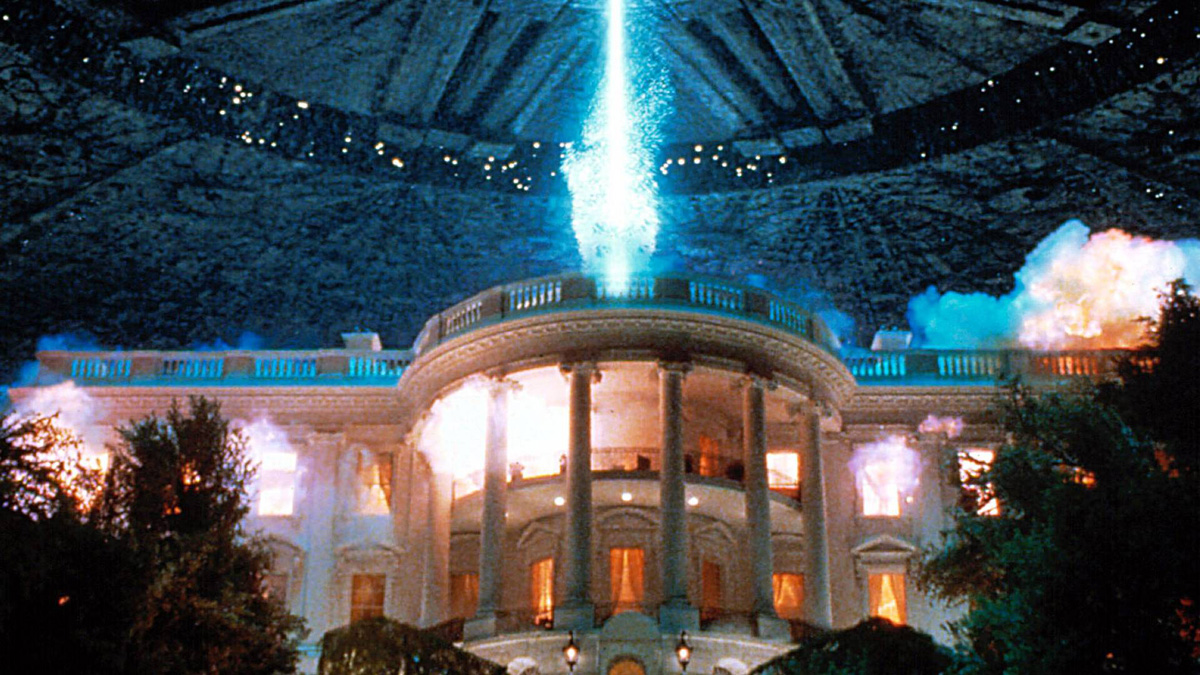 "Perhaps it's fate that today is the 4th of July and you will once again be fighting for our freedom, not from tyranny, oppression, or persecution, but from annihilation. We're fighting for our right to live, to exist and should we win the day, the 4th of July will no longer be known as an American holiday, but as the day when the world declared in one voice, 'we will not go quietly into the night, we will not vanish without a fight, we're going to live on, we're going to survive.' Today, we celebrate our Independence Day!"
President Thomas Whitmore
It's one of the most rousing presidential speeches ever, albeit fictional, but Bill Pullman fulfils the role of commander-in-chief better than most real-life presidents have since the movie's release in 1996.
You can't have missed this epic 90s sci-fi adventure as Will Smith teams up with Jeff Goldblum to save the planet from an aggressive alien race with just one goal, to invade and destroy Earth.
The movie has enough to excite any ufologist with an imagining of the insides of the infamous Area 51 base and talk over coverups and "plausible deniability."

2. Close Encounters of the Third Kind 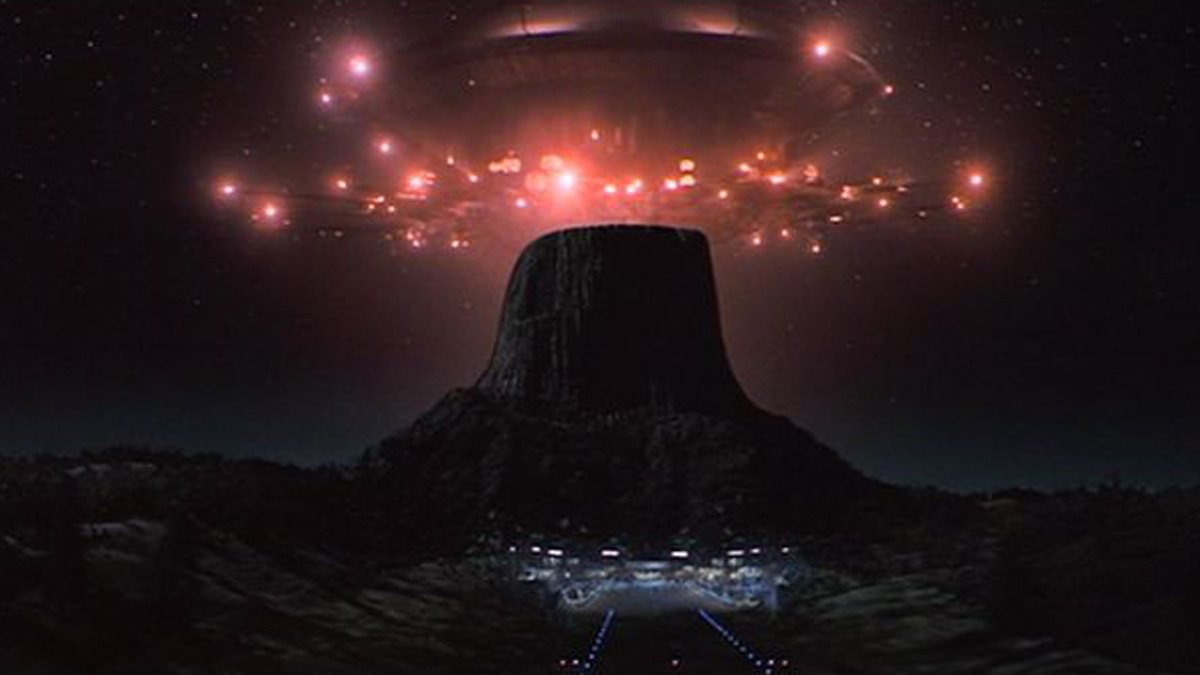 Written and directed by Steven Spielberg, this 1977 alien visitation movie is a classic. No one who's seen it can ever forget the haunting tones which bring the open-minded to Devil's Tower where they make contact with the passengers of an alien space craft.
Now 40 years on, I can't believe this movie hasn't yet been remade, especially as Spielberg himself says he is no longer happy with the ending of the story. Now as a husband and father, he no longer believes that Roy Neary would abandon his family to explore the stars. 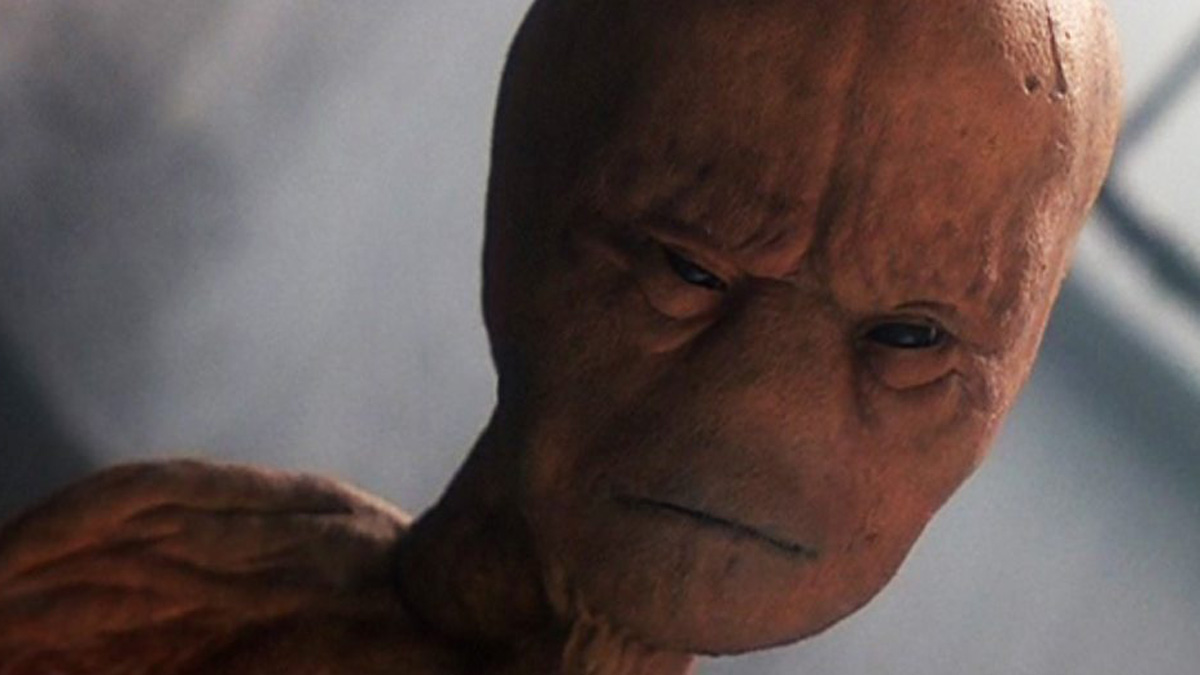 Released in 1993, 'Fire In The Sky' is a terrifying and very realistic account of the real extraterrestrial abduction and experimentation of of Travis Walton.
The movie, set in Arizona in 1975 follows a small lumbering crew who encounter a saucer-shaped object hovering over the ground during their drive home from a day's work in the Sitgreaves National Forest near Snowflake.
Curious to find out what this craft is, Travis climbs out of the truck and approaches it, resulting in him being struck by a beam of light from the craft.
Travis' workmates flee the scene, assuming he has been killed but are later unable to find his body. The local sheriff heads up a man hunt to find Travis, but the sceptical town folk make the logging team the key suspects to Travis' disappearance and the sheriff soon treats the case as a murder investigation.
Five days later Travis returns, alive but naked, dehydrated and traumatised. Following his return Travis experiences a series of flashback of his abduction by extraterrestrials.
The flashback scenes aboard the craft are terrifying, the aliens treat Travis as an inferior being, using him for nothing more than experimentation, with seemingly no concern for his comfort or wellbeing.
The fact that the movie is based on Travis Walton's real life account of alien abduction makes it all the more chilling. In fact, Travis' story won him and his co-workers a cash prize of $5000 for "best UFO case of the year" from The National Enquirer.
Travis and all of his workmates involved in the case each went on to pass polygraph test, except for one, and that one was inconclusive.
Of course, sceptics consider the case to be a hoax designed to make the lads some extra cash, which was exactly what happened that to the media massively sensationalising their story.
There are claims that the polygraph tests were "poorly administered" and that Travis used "polygraph countermeasures" such as holding his breath.
Add A Comment
Tags:
moviesparanormalufos

Danny Robins Delves Into The Case Of The Todmorden UFO