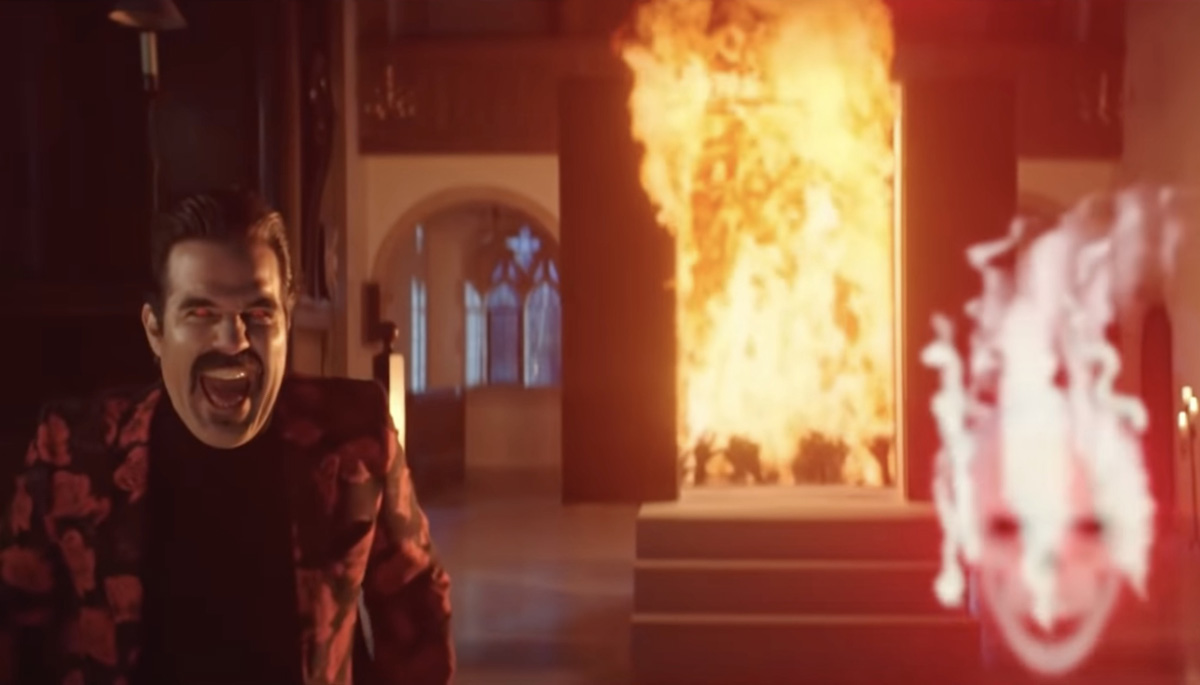 Photo: © ITV
With spirits whooshing around an old church, a ghostly apparition and an encounter with the Devil himself, Ant and Dec went full-on spooky in their new 'Saturday Night Takeaway' segment, 'Polter Guys'.
The comic duo created the mini series to celebrate 20 years of their long-running ITV weekend show, 'Saturday Night Takeaway'. The sketch revolved around a flashback to 2002 on the night before the first episode of the show, at a time when the Geordie hosts were enjoying chart success with their World Cup anthem, 'We're On The Ball'.
The flashback is packed full of appropriate cameos, including England footballer, Wayne Bridge, who in 2002 would have been in training for the World Cup, and singer, Will Young, who was enjoying chart success with 'Evergreen', there was also a cheeky appearance from Melinda Messenger.
The six-minute-long, paranormal themed skit also featured US actor and comedian, Rob Delaney, who took on the dark role of the Devil himself - complete with Prada show, a velvet suit and an aura of pure evil.
It's soon revealed that Dec, who admits he'd do "anything" to make the new show a hit, foolishly traded his soul for 20 years of frivolous light entertainment success. In accordance with Dec's deal with the Devil, when the two decades have passed, Dec will have to give the Devil his soul and willingly join him in Hell.
Jump forward to the present day and Ant and Dec are enjoying a takeaway together, but are rudely interrupted by the Devil, who has returned to collect his dues. When Dec refuses to come willingly, the Devil opened a hatch to Hell, flooding the earth with evil spirits who will torture humanity until Dec surrenders his soul as per their contract.
The short segment, entitled 'Deal With The Devil', ends with Ant and Dec fleeing from the house as a terrifying female apparition appeared, setting up the rest of the mini-series, which will see the duo become ghost busters.
The adventure will include many more celebrity cameos including Jo Brand, Kadeena Cox, Tom Allen, Fred Siriex and Roman Kemp.
You can catch the second part of 'Polter Guys' as part of 'Ant & Dec's Saturday Night Takeaway' this Saturday night at 7pm on ITV.
Tags:
televisioncomedytopicalparanormal