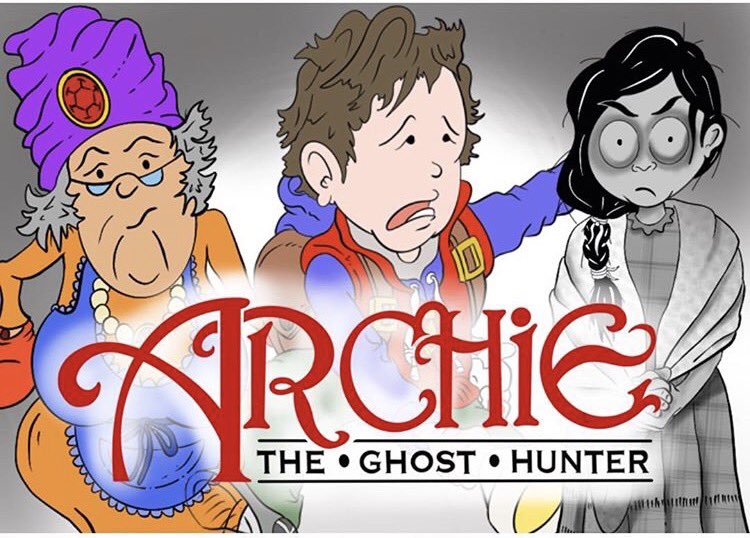 Photo: twitter.com
The queen of the paranormal, Yvette Fielding, is set to release her first children's book and if you're a fan of ghost hunting then you'll love reading this supernatural story to your kids.
'Archie the Ghost Hunter and the Rising' is released on September 5th and is available to pre-order now. The television ghost hunter, who is an avid reader herself, was inspired to write Archie's first adventure after constant request from fans of 'Most Haunted' for her to pen something for children.
"I'm so excited to share the paranormal spooky world of Archie and friends with the rest of the world."
Yvette Fielding

Yvette has previously released a handful of books on the subject of the paranormal and relating to her appearance in the long-running television show 'Most Haunted', but 'Archie the Ghost Hunter and the Rising' marks her first release in the world of fiction, with a ghostly story revolving around a seemingly normal boy called Archie Nuttall from the incredibly uneventful fishing village of Bottomley-on-Sea that's aimed at children of nine and up.
It's only on his thirteenth birthday that Archie realises his life is anything but normal, when he's thrown into a world of ghosts and demons. Archie becomes a source of hope for all in his battle with evil and his quest to save the world.
Archie brings his pet along for the ride, a gassy British bulldog, called Watson. The name may be familiar to 'Most Haunted' fans as Yvette is often joined on ghost hunts in the show by her own bulldog, Watson.
According to Yvette, the real life Watson "can definitely tell when something odd is going on," and he did seem to know something was up when Yvette brought home a cursed doll before a 2018 episode at Codnor Castle Cottage. Watson barked and growled uncontrollably at the child's toy, which went on to spontaneously burst into flames during the investigation.

When Watson has to be involved in every stage of my new book #Archietheghosthunter Availble to pre order now. pic.twitter.com/6pBkYtB3IA

Author Steve Cole has called the book, "a nail-biting spine-chiller with plenty of heart from an author with unique inside knowledge of the subject matter... Not for those of a nervous disposition!"
Speaking about her new book, Yvette said "I'm so excited to share the paranormal spooky world of Archie and friends with the rest of the world. What started out as a dream has now been made into a book for all to share. I've fallen in love with the little fishing village of Bottomley-On-Sea and all its inhabitants good and not so good and I hope the readers will too." The fictional town is based on one of Yvette's favourite spots, the coastal town of Polperro in Cornwall.
The book is illustrated by Yvette's husband and on-screen ghost hunting partner, Karl Beattie, who is also a cameraman and producer on 'Most Haunted'. The series, which first aired in 2002, is the couple's flagship show produced by their own production company, Antix.
After Yvette announced her new book, Karl tweeted "when my beautiful talent and extremely gorgeous wife started to write a book I could never have imagined the whole new world she would create. A scary funny adventure into the other side."
Since it first appeared on our screens on Living TV, the show has now notched up almost 300 episodes and has become a worldwide hit. It's still going strong on the Really channel in the UK, and on Amazon Prime and the Travel Channel in the US.

Archie The Ghost Hunter events coming soon for children with Most Haunted Experience..
From the amazing book by @Yfielding #archietheghosthunter https://t.co/kJN6qaCND9

The book's title suggests that 'The Rising' probably isn't going to be Archie's only paranormal adventure and it seems that readers of the book will be able to get involved in his adventures in real life. Kids will get the opportunity to take part in child-friendly ghost hunts with Yvette Fielding based around the amazing stories in the brand new book.
The first event takes places on December 13th, 2019 at Ruthin Castle in Wales. Tickets are on sale now, find more details here. The events will be run by Most Haunted Experience, who already run ghost hunting events across the UK giving fans the chance to meet Yvette, Karl and other members of the 'Most Haunted' team.
If ghost hunting isn't for your little one, then there will also be the chance to meet Yvette in person at book signing events across the UK. The publisher Rudling House, will be announcing dates and more information soon.

Archie the Ghost Hunter and the Rising

'Archie the Ghost Hunter and the Rising' is written by Yvette Fielding with illustrations by Karl Beattie. It can be pre-ordered from Amazon now with a release date of September 5th, 2019.

Fellow-author Damien Lewis says that book is "beautifully written. Moving and inspirational on so many levels."