Are There Ghosts In Space?

Ghosts are said to be the spirits or energy of the dead, when the body dies the spirit is left behind. They often haunt place where they lived, where they died or somewhere with a special meaning to them, like a place they frequently visited. 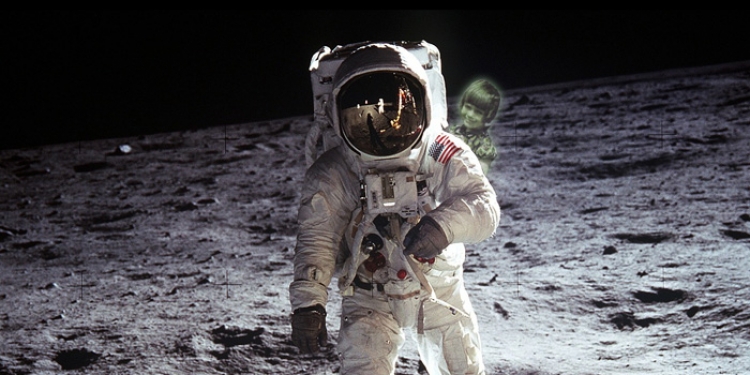 Photo: pixabay.com
Some say the psychic energy or emotions from the body can be captured and stored in the surroundings in materials like stone, wood and even the ground. It's said that on the anniversary of the death or when the conditions are right the materials release their energy and the events can replay.
But what happens if someone dies in space? There are no buildings for a spirit to cling on to, there is no ground, there's not even air that a spirit could attach itself to, there's just space.
Perhaps if someone died aboard a spacecraft, the spirit could haunt that vessel, in the same way that those who die at sea were sometimes claimed to have haunted their ships. We've all heard the term "ghost ship," but a "ghost space ship" is a new concept.
Let's assume a spirit could haunt a fixed point in space, let's say an astronaut died during a mission halfway to Mars aboard a space shuttle. Within minutes of their death the point of death would be thousands of miles away from the shuttle.
This is because Earth orbits the Sun at 67,000 miles an hour, when a shuttle takes off from Earth it has the same momentum, it too will orbit the Sun at about the same speed, but if the spirit attaches itself to a fixed point in space then the ghost will remain stationary in space while the shuttle (and Earth) moves away at about 18 miles per second.
The ghost wouldn't be subject to inertia or momentum in the same way as the shuttle is because energy has no mass, it would also not be effected by gravity.
To make this even more complicated, the shuttle isn't just moving in relation to the Sun, to quote Monty Python, "now the Sun, and you and me, and all the stars that we can see, are moving at a million miles a day. In the outer spiral arm, at 40,000 miles an hour of a galaxy we call the Milky Way."
Of course there's no scientific evidence, or any evidence for that matter that ghosts exist, but it's pretty unlikely you'd find any in space anyway as there has only ever been three deaths in space.
In 1971, Soviet cosmonauts Georgi Dobrovolski, Viktor Patsayev and Vladislav Volkov died while returning to Earth from the Salyut 1 space station.
Their spacecraft, the Soyuz 11 landed intact back on Earth thanks to an automated landing sequence, but when the capsule was opened the three men were found dead.
An investigation found that a ventilation valve had ruptured and the cosmonauts suffocated due to a lack of breathable air 104 miles from home.
So, to answer the original question, are there ghosts in space? No.
View Comments
Tags:
paranormalghostsspace