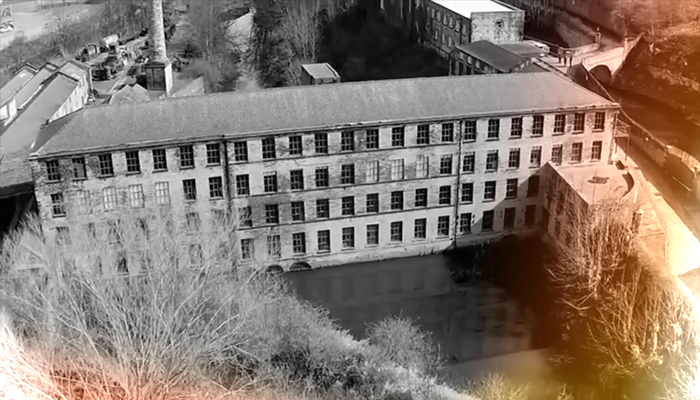 This week Most Haunted investigate Armley Mills in Leeds, a huge woollen mill that dates back to the 16th century and became was once the biggest in the world under the ownership of Colonel Thomas Lloyd who purchased the property in 1788.
Work in the mill was hard and employees, many of whom were young children, were expected to work long hours. In 1804 was mill was bought by Benjamin Gott, but less than a year later it was almost completely destroyed by fire.
Gott rebuilt the mill as it exists today. He offered better working conditions than people had been used to, and the business grew and became one of the largest employers in Britain.
The mill inevitable closed its doors in 1969 due to changes in the working practice of the industry. It reopened in 1982 as a museum, as a historical monument to all that was good and bad at a time of Great British industrial growth. 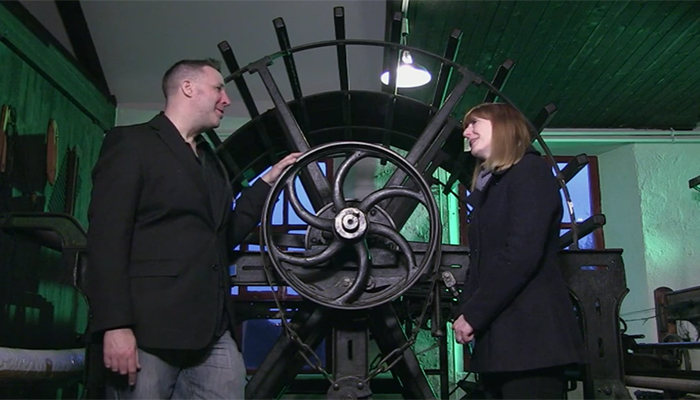 The episode started with Yvette Fielding, who had a bit of a cold, telling us about the haunted history of Armley Mills, which is said to house Victorian ghosts and poltergeist activity, as well as disembodied voice and dark shadows.
One of the building's resident spooks is a tall Victorian gentlemen who's been seen many times wearing a top hat and using a cane. He's said to walk the floors of the mill in the dead of night.
In a part of the mill which is now known as the cinema room, two spirits are said to roam. One is an original ghost of Armley, whereas the other has come with the fixtures and fittings of the cinema. One of the apparitions is said to be sinister. People have reported seeing seats move all on their own.
As the mill's workforce was made up of children as young as six, there were many accidents and deaths amongst the machinery were common in the mill's heyday. As a result, the ghosts of children have been witnessed around the old machinery.
The show's resident skeptic, Glen Hunt said that, "psychologically this place messes with your head." He said that problem is that the as a museum, the building is dressed up like it would have been in the past, "we need to wipe the slate clean and just imagine it as a regular building and investigate it on its own merit, because already our minds are charged with what once happened here."
Yorkshire's mills has a reputation of being dark satanic, demonologist Fred Batt explains why, "the owners of the mills treated their workers so brutally and badly. 16 hour days, six-year-old children, would work six in the morning until seven in the evening. They'd stand there for hours with their hands up wanting to go to the toilet, and there was one little boy who died because the owner wouldn't let him go to the toilet." Apparently another young girl died after getting her leg caught in a machine.

"One of my most favourite places I've ever investigated because there's so much to it, there's so many different areas and it's huge."
Yvette Fielding 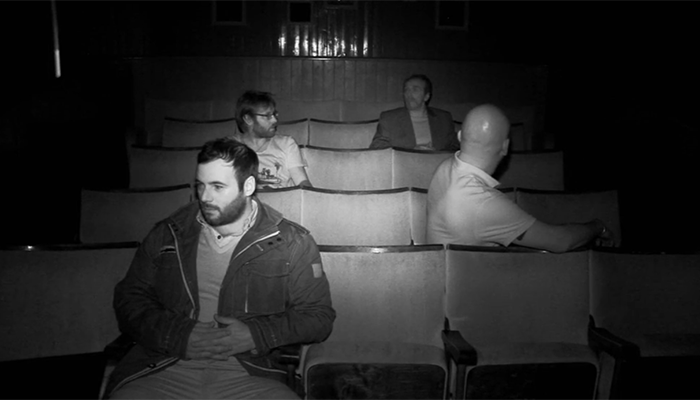 After the lights were turned out, the team split up. Fred took his team to the cinema room with Eamonn Vann-Harris, Darren Hutchinson, and Stuart Torevell.
Fred started calling out, "if you can hear me, tap on the floor, taps once for yes." Then a chair slammed down on its own, which actually isn't that unusual in a cinema. Stuart put his hand on the seat and said, "the seat is actually pulsating."
Again the seat fell down, but we didn't actually get to see the seat getting put back up, so it's not really clear what happened. 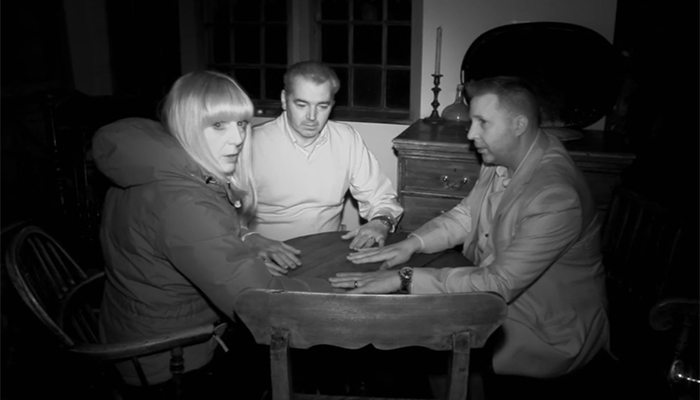 Meanwhile, Yvette was with Glen, Karl Beattie and camera man Gregg Smith in the manager's cottage. Karl described the cottage as a "really spooky place actually because it's still all dressed as it was." They sat down to do a séance and heard a really odd noise, it sounded like a grunt and was very clear.
Yvette then started to call out, "if there's anybody here, can you come towards us, let us know that you're around." They started to hear tapping behind Karl, it seemed to be coming from an old cabinet and was followed by more creaking.
They all suddenly reacted as the table moved, although it wasn't really noticeable on camera. Karl then jumped and claimed that something had touched him on the arm. This was followed by loud knocking sounds.
Yvette said, "give me three loads knocks if you can hear me" and three knocks could be heard. She then asked, "do you want us to go? Two for yes, one for no," and two knocks were heard indicating "yes."
As the session came to an end, Yvette left the room. As Karl stood up the table it leapt forward about 20cm away from Glen.

It was then time for Yvette to take part in Eamonn's EVP experiment. Eamonn had set up a laptop in the cinema which generated white noise and tones using a sine wave generator. The sounds were played out through four speakers into the room.
Yvette then sat in the cinema on her own and called out to the spirits of the cinema, asking questions and encouraging them to interact. A microphone in the cinema captured Yvette's voice and hopefully the sound of any spirits who are able to answer.
The captured audio is fed into a computer upstairs with Eamonn was monitoring. The computer filtered out the tones and white noise leaving the raw audio and any possible spirit voices, or EVPs (electronic voice phenomenon).
Yvette sat in the dark and started her vigil, even without the the EVP equipment, a strange whimpering sound was picked up on camera.
Yvette started calling out, "hello!" Meanwhile upstairs Eamonn said he could hear a male voice talking back to her, but I couldn't hear anything. However, Eamonn was getting very excited by the audio, "every time she says 'hello', someone is trying to grab her attention, this is actually very clear."
After Yvette joined him, Eamonn played back the audio recording. In the recording, Yvette could be heard saying, "can you tell me your name?" there's was a sound which Yvette and Eamonn said was "yes" but I really couldn't hear it myself, but Eamonn described it as "a nice clear yes."
But moments later there was a very clear whisper saying "get lost," Eamonn described the recording as "a class A EVP right there." 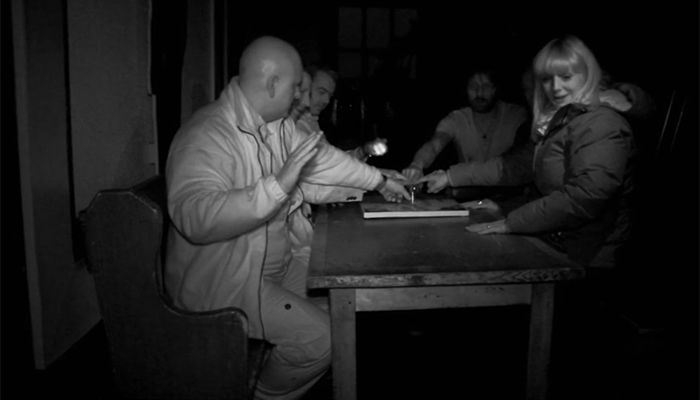 The episode finished with a pretty eventful ouija board session. As soon as the gang sat down around the table, creaking could be heard under the board. Then the table started rocking and wobbling, after a while it even started lifting off the ground.
Then all of a sudden the table shot towards Gregg. The team called out and asked the spirit to move the table back to its original position, and seconds later it did, moving at least 30cm across the floor.
A shot underneath the table showed that none of the team's knees were touching the table. As they were about to call it a night, the table jumped one last time. It was one of the best examples of table tipping I've seen.
Yvette summed up the investigation, "Armley Mills has proved to be one of the most haunted places we had ever investigated, I will never forget a disembodied voice telling me to 'get lost'."
The new series of Most Haunted continues on Really. Watch on Freeview (17), Sky (155) and Virgin Media (129), or watch previous episodes of Most Haunted on demand on the UKTV Player.