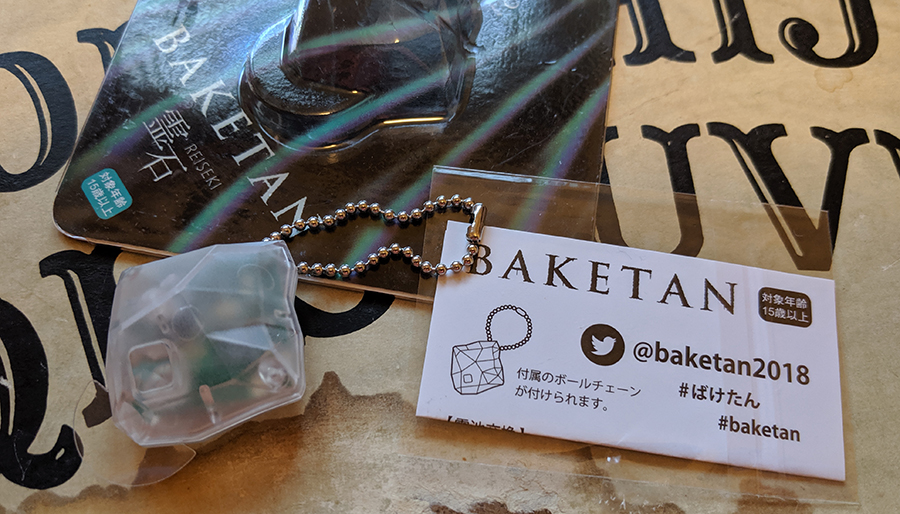 You may have seen an odd-looking ghost hunting gadget being talked about on websites like Bustle over the last few weeks, but what are they and do they work?
The keychain-sized gadget is produced by a Japanese company and all we knew about the stone was a handful of facts taken from a poorly translated Amazon product listing. That is until now... we managed to get our hands on a Baketan Reiseki and find out what it's really all about.
The first thing to say about the Ghost Rock is that it is small - really small, but don't expect an organic pebble, this device is encased in a robust, stone-like plastic shell.
It's not much bigger than the round, flat, CR2032 battery it takes. According to reviews that battery lasts forever, which is good because from the moment you take the device out of its packaging and pull out the isolating plastic tab, it is on and stays on.
After setting at the stone with a screwdriver and looking under the hood, it turns out that despite its small size and comparatively low price point, the Baketan actually has a bit of a scientific basis behind the way it works. In fact more so than the commonly-used K-II meter, which has no scientific basis at all.
Admittedly the scientific theory behind the Baketan it VERY flakey, but over all the device is no more ridiculous than other gadgets on the market, especially given the fact it's pocket-sized and much cheaper than some devices you can buy. 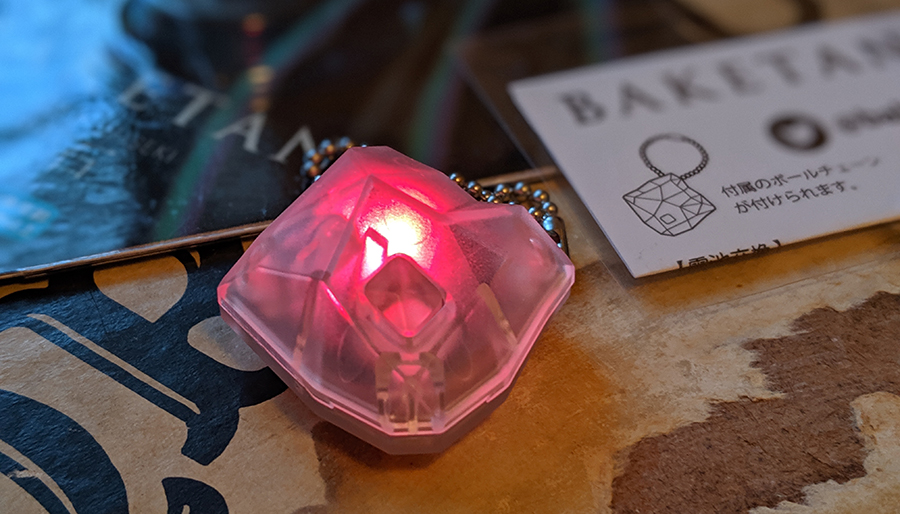 By default the device is always running in "automatic mode," which means that every 10 minutes it checks the environment around it to see if there are any ghosts present. However, if you want an instant measure of ghostly activity, then you can press the button on the Baketan Reiseki and it will do an instant scan for entities.
In automatic mode the keychain will silently flash to alert you if it detects anything odd. It will flash blue to indicate an angel is near, or red to indicate a ghost. To Westernise the device slightly, I guess you could think of this as positive sprit entities and malevolent demons.
When you press the button to perform an instant search mode the Baketan flashes through various colours as it searches, each time letting out a small beep. After 10-15 seconds it settles on a colour which pulses twice to indicate the result of the search.
Like in automatic mode, blue means something nice and red means something nasty - but the search may also glow green, which simply means "normal", there's nothing supernatural going on around it. 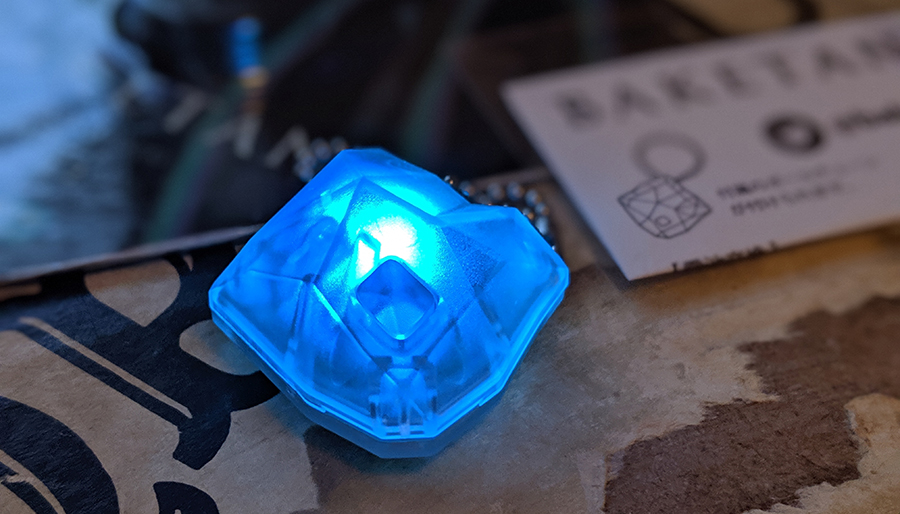 So, how does it work? Well... as you might expect, the science is a little bit flakey, but this is true of all ghost hunting gadgets. It works in a similar way to electronic speech synthesis devices and apps like the Ovilus - using random number generation.
In the case of speech synthesis gadgets the random number generator references a database of words. It's believed that a spirit or a human consciousness that has survived death can manipulate the random number generator, making it non-random at the point when the word comes up. Usually the device monitors conditions such as temperature, pressure, humidity and electromagnetic field strength in order to allow sprits to influence the random nature of the number.
Solid Alliance, the company who make the Baketan, have kept the details of their algorithm secret, but have said that it is based around random number bias. During its warm-up sequence when it flashes and beeps it is generating a series of random numbers using the piezoelectric effect of the on-board quartz crystal.
The stone glows various random colours during this process, these colours are based on the random number generation sequence, but is not an indication of the final scan reading. This is because during this process any entities nearby have their chance to influence the random nature of the numbers, creating bias.
They would presumably be able to do this be touching or coming near to the quartz crystal and changing its natural vibration of 32,768Hz, this electrical signal is probably used as part of the seed in the random number generation, so by changing the frequency, you influence the numbers generated... in theory.
After the cycle is complete the device checks to see how random these numbers were. If the stone detects a bias or heavy weighting towards a certain number or range of numbers, then it deems this to be a ghost and lights up red.
However, if the device detects specific combinations of numbers then if puts this down to the presence of angels. Exactly what these "specific combinations" are has not been disclosed by the gadget's makers, but it could well be 'angel numbers', which are repetitive sequences of numbers like 111, 222, 333, etc.

Basically, there's a quartz crystal inside which vibrates at a certain frequency. This is why quartz is used to keep time in watches - it's not some wishy-washy spiritual vibration, it's called the piezoelectric effect.
The theory is that if a ghost touches the crystal, passes through it or is nearby it could disrupt the vibration and change the electrical signal, which the device interprets and alerts the user to as either a red or blue glow.

Does It Really Detect Ghosts? 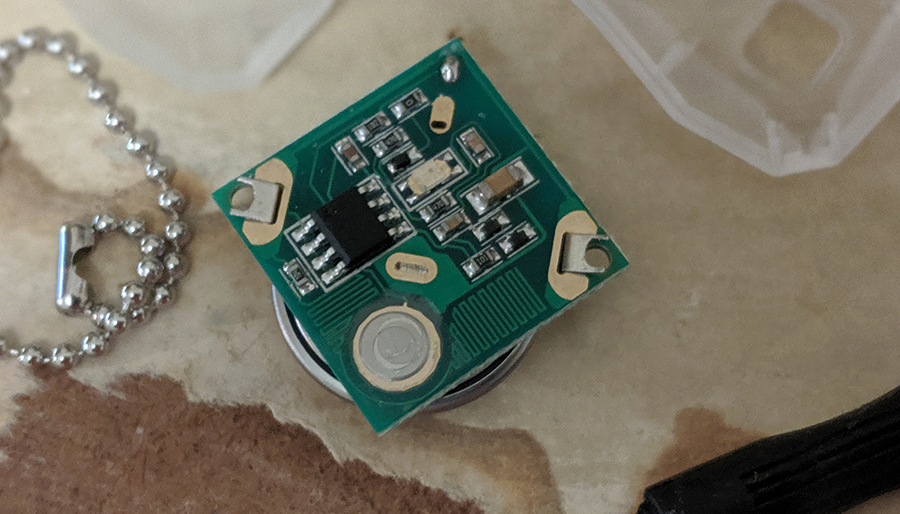 No, there is no evidence that this stone can really pick up on the presence of a ghost, but this is also true of EMF meters, spirit boxes and countless other paranormal gadgets. So, if you're the type of paranormal investigator that uses gadgets, then there's no reason not to use this one - it's just as good as the others, perhaps even better.
Inside the keychain there's not really much to see. The makers boast that it contains a "real cracked quartz crystal". This is sort of accurate, there is a very small quartz crystal resonator - the type used as the timekeeping component in digital watches and clocks. The term "cracked quartz" has probably been corrupted in translation, it's actually the plastic shell of the device itself that is supposed to look like semitransparent cracked quartz.
Those who believe in the power of crystals say that quartz is able to collect, amplify and re-direct the spiritual energy around it. So, there is at least a little theory behind how this gadget works. Although quite how it turns the interference of this energy into either a blue or red light and how it interprets the colours' meanings is unclear.
If you assume that a spirit can affect a quartz crystal in the same way it can use its energy to psychically knock on a surface or move an object, then it means you COULD at the very least use the red and blue responses as an alternative to the classic 'one tap for no and two for yes' method of spirit communication.
The biggest problem with this device is that in life most of us wouldn't have a clue how to affect the outcome of a random number generator by manipulating an electrical current feeding the device. Is this knowledge or a skill we acquire when we die?
Solid Alliance are no strangers to producing ghost hunting tools, their first gadget went on sale in Japan in 2005 and the company has proved to be a commercial success within its niche. Now for the first time their products are starting to gain international attention, perhaps because the Baketan is so unlike any other paranormal gadget on the market. 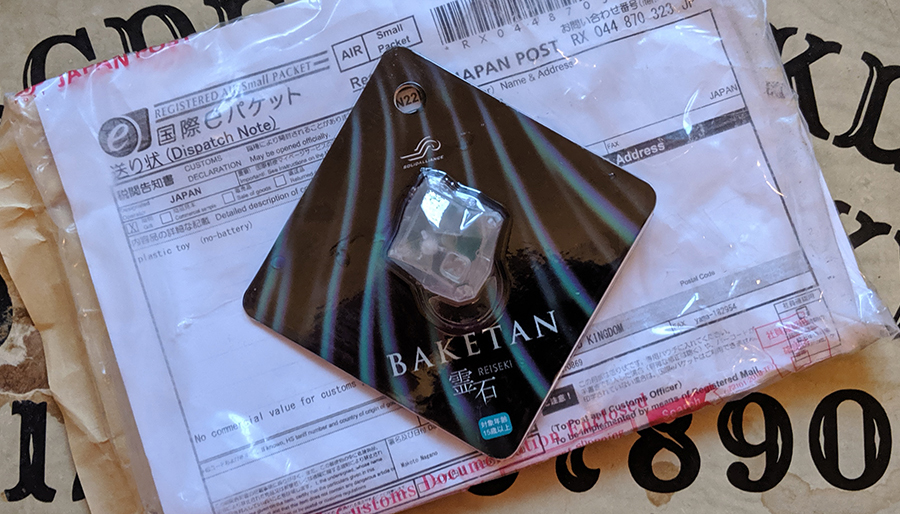 Where the operation of the Baketan Reiseki gets a little more questionable is the "barrier mode", which offers spiritual protection to its owner. This can be activated by holding down the stone's only button for five seconds when the stone lights up red, indicating something bad is present.
It's not explained how this mode works, there is no visual or measurable indication that the barrier is active and there's no specific component under the shell that could result in such a protective barrier. Although the spiritual among us will claim that quartz has protective properties, so it could be utilising its internal crystal component.
The gadget's press release merely states that barrier mode "eliminates the deviation of randomness forcibly" - this is either deliberately vague or a poor translation from Japanese. 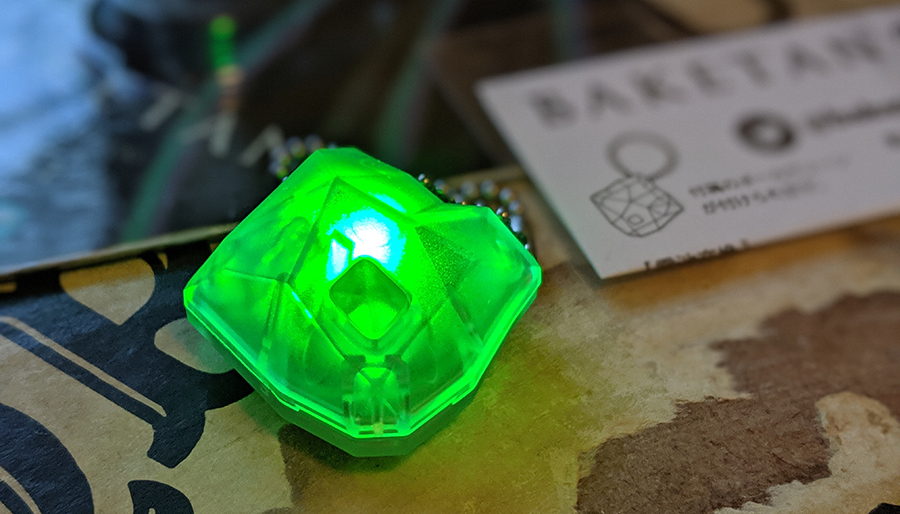 At first glance the Baketan Reiseki looks gimmicky and too small to perform any genuine operation. I assumed it would just flash a random colour every now and again. Perhaps it does, but the light doesn't seem to be randomly flicking between colours, there seems to be some stability to it. I'm yet to detect a ghost in my home for example.
The on-board technology is theoretically more capable of finding a ghost than most other paranormal tools on the market, but like the other devices its operation is still based around unfounded beliefs rather than proven science. In the Baketan Reiseki's case the unfounded beliefs are a bit more logical - albeit false logic.
Having said that, the device is a fun novelty item, but at $30 it is priced slightly higher than most novelty keychains you could buy. It's more like a $7 gadget.
Forget the fast that Halloween is fast approaching, the Ghost Rock would be more suited as a stocking filler for a paranormal enthusiast this Christmas. After all, the Amazon listing does describe the device as a toy... but then that's also true of the Ouija board and many are convinced of their abilities and use them as genuine investigation tools.
So, the Baketan Reiseki's effectiveness as a ghost hunting tool really comes down to your own belief in it and similar paranormal gadgets.
Tags:
paranormaltopicalghost hunting