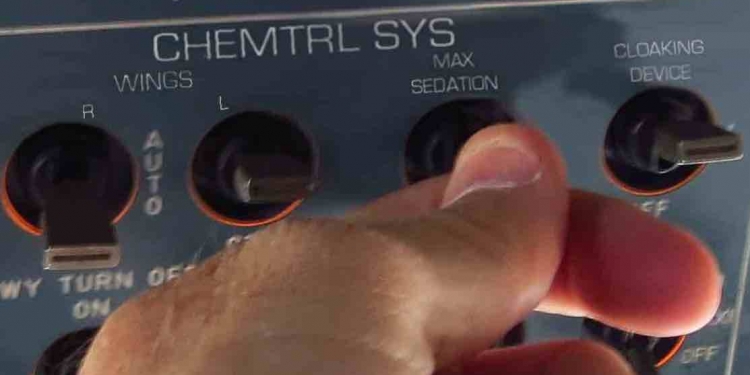 Photo: twitter.com
A series of photos have been posted to Twitter by @AeroDork, an account dedicated to the history of aviation and space flight.
The photos appear to show proof of conspiracy theorist's long-standing belief that the government are covertly releasing chemical into the atmosphere using military, and even commercial aircraft.
The series of six spoof photos were posted along with the words, "what more proof do you need?"

All of the photos show various control panels on the flight deck of aeroplanes and featured buttons and switches labeled with "chemtrails".
For the eagle-eyed there are plenty of clues that these photos are parodies, designed to mock those who believe in chemtrails. For example in the first photo, the chemtrail switch has two settings, on or on.
In another of the photos the pilot is seen switching to "maximum sedation" on his chemtrail system. The switch next to it gives him the option to turn on the aircraft's cloaking device.
The chemtrail conspiracy theory is a long-running belief that the world's governments are pumping chemicals into our skies through the exhausts of planes.
It's claimed they do this for many reasons, including influencing food production, specifically to force organic crops to fail, resulting in crops of only genetically modified foods.
Others speculate that chemtrails are in fact the result of world governments releasing lithium into the atmosphere to reflect sun back into space in an attempt to reverse the damage of climate change.
The most common belief is that chemtrails are a hormone or drug which is designed to control the population, by either stunting reproduction, or making us suggestible and easy for governments to control.
The easiest way to debunk a conspiracy theory is to ask just one simple question, "does it effect rich/powerful people?" If the answer is "yes", then it's most likely not true.
Chemtrails can be disproven with this question. If world leaders are releasing chemicals into the air in order to control the population, then we need to ask "do these world leaders breathe air?" Yes, they do and would therefore be effected by the chemicals in the atmosphere themselves.