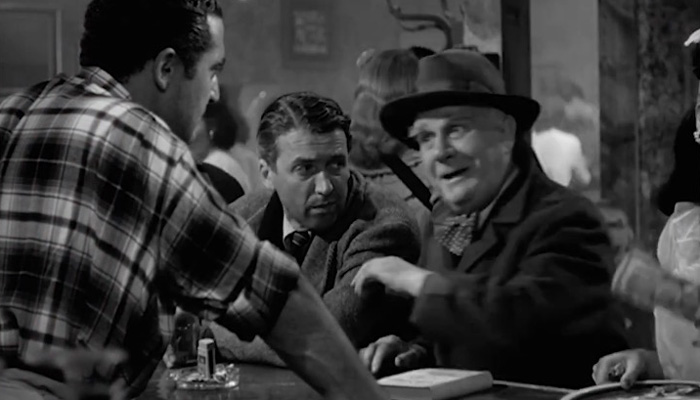 A classic Christmas film directed by Frank Capra, and starring James 'Jimmy' Stewart as George Bailey, a man whose Christmas Eve suicide is stopped by a friendly angel who shows him how different life would be in his town without him.
The Booze
When George calls in to a bar and asks for "Mulled wine, heavy on the cinnamon and light on the cloves," he gets rebuked by the bartender who tells him: "Hey look mister, we serve hard drinks here for men who want to get drunk fast."  So, mulled wine we know. 'Hard' booze? We'll take that as what our American cousins charmingly call 'whiskey'.
Mulled Wine Recipe
Stick a bottle of wine in a saucepan along with half an orange, three tablespoons of Demerara sugar (or whatever sugar you have to hand), a bayleaf, some grated nutmeg and a cinnamon stick.
Warm it up until the sugar dissolves.
If it's not sweet enough, add more sugar.
If it's too sweet, tough.
When you're happy, removed from heat and optionally add a decent glug of any fruity booze you have – sloe gin, leftover Pimms, fruity cider.
Ladle it into a mug, or a heatproof glass if you're feeling fancy.
Cider is regularly sloshed in. Give that a go if your hooch is lacking a bit of lift.
Drink.
Complain about the flavour of the spices.
Wait until the alcohol kicks in and then realise it's not that bad and keep drinking. 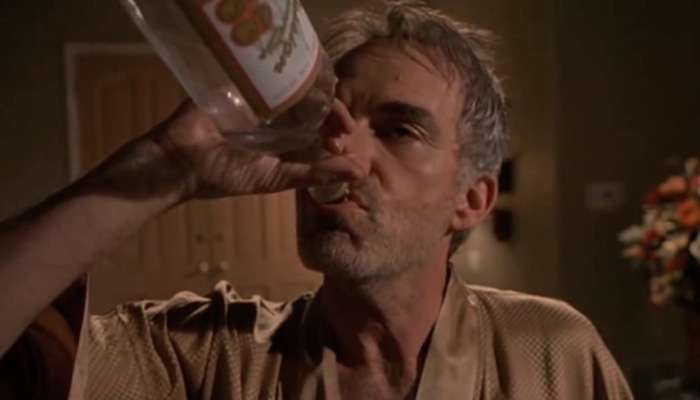 Any Christmas film that involves alcoholism, robbery, sex addiction, planning murder and a woman with a sexual fetish for Santa Claus is worth at least one watch. Starring Billy Bob Thornton, this is perfect if you've had enough schmaltz for one year. This is one film that might make you want to kick the hooch rather than encourage you to drink up.
The Booze
Bourbon, beer, neat vodka, screwdrivers – vodka and orange.
Screwdriver. A Screwdriver is pretty much the only cocktail even terrible bar staff can get right. Shove some ice in a glass – if you have some handy, pour in some orange juice, slosh some vodka over the top. By all means use fresh orange juice and high end vodka, but at the end of the day this is basically boozy fruit squash. 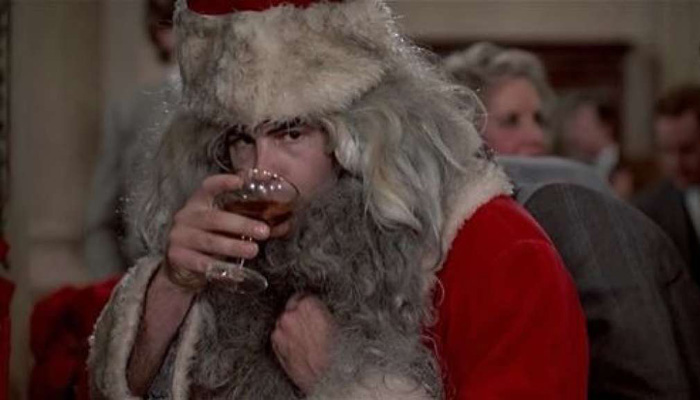 Regularly listed as one of the funniest films of all time, this beautifully observed comedy is a more modern take on the body-swap story which first saw light in Mark Twain's 19th century novel 'The Prince And The Pauper'. Starring Eddy Murphy as the homeless Billy Ray Valentine, who swaps position with an upper class commodities broker, Winthorpe, played by Dan Aykroyd. Why the swap? Well, it's all part of a bet by placed by the cruel and unusual Duke Brothers. Also starring Denholm Elliot and Jamie Lee Curtis, a film with shedloads of plot and some fantastic gags. The film is set around Christmas, and includes a Christmas party scene, various people dressed as Santa, and the climax of the film takes place on New Years Eve.
So, seasonality established. What about the drinks?
Booze
Whiskey – used by the Duke Brothers to bribe Billy Ray Valentine into their limo. Punch – at Billy Ray's party. Eggnog as served by the Butler, Colman. Champagne – Billy Ray orders a round in the bar, and drunk in the closing scenes on the beach.
Punch –Punch derives from the Sanskrit word for five, as this drink originally comes from India and was made from five ingredients: alcohol, sugar, water, lemon and tea or spices. The British Empire saw it journey to England from there it spread to the rest of the world.
Recipe, in all honesty, god knows, but try something fruity – cranberry juice for example, something fizzy – ginger beer or lemonade, some fruit juice – lemon, lime or orange juice, or all three, some water – if you're nervous, and then booze, probably vodka works best. You can add sugar to taste, and more or less booze, but the whole idea is it's meant to be fruity, and not too strong. Improvise!
Eggnog – Far more popular in the US than over here, eggnog is a great drink if you've skipped a meal and your blood sugar is running low. It's basically sweetened, boozy milk. Everybody has a different recipe, but a starter recipe is to add 50 g of caster sugar with 75ml of water and simmer until the sugar is dissolved. Shove it in the fridge until cold. Beat four egg yolks with some vanilla essence until smooth, add a 400g tin of condensed milk, 100ml of brandy (or whisky, or rum, whatevs) and the cooled sugar syrup from earlier. Mix well. Pour into a jug, cool serve over ice. Not what we'd call a 'session drink'. 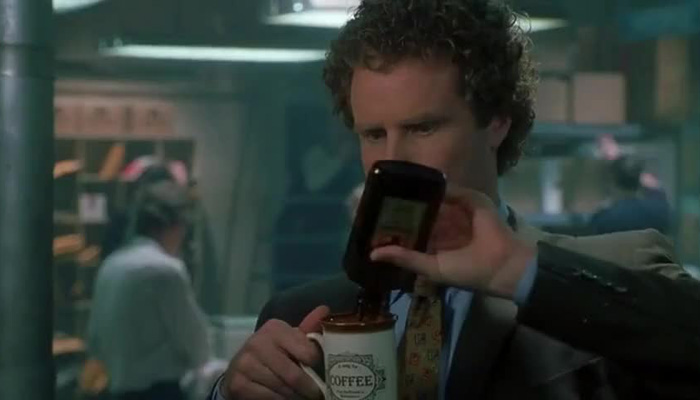 A slow burner on its release in 2003, 'Elf' has now become something of a modern, Christmas Classic. You must know the story! Will Ferrell plays the title role. The plot is a bit thin, but he plays the role of a human baby who crawls into Santa's sack, is raised by elves as one of their own, though he is clearly much larger than the rest of the Santa's workforce at the North Pole. Ostracised, he makes his way to New York to search for his biological father. Cue fish out of water gags aplenty.
Until recently, many people in the UK would time the official starting of the Christmas season to when Channel 4 screened 'Elf', usually around the second weekend in December. Then Sky came along in 2013 and grabbed 'Elf' for itself. Yes, that's right, you should be booing the panto villain Rupert Murdoch! Anyway, it's on Amazon Instant Video and Netflix, or £1 on DVD from your local charity shop. Enthusiastic viewers even try to synchronise viewings of 'Elf' to get that communal vibe back.
Why does Elf work? It's a film kids enjoy that the adults can watch too. The sentimental stuff isn't overpowering, but it's really Ferrell who holds it together. Other actors would have been annoying in the role, but he nails it.
The Booze
Not a hugely boozy film, as Buddy the Elf spends more of his time knocking back syrup, but he does get boozed up in the mailroom on the contents of a hip flask which he adds to his coffee, to make a kind of Irish coffee. (We don't know what the alcohol in the flask is, it could be brandy, rum, a liqueur!)
Irish Coffee: Usually, this is Irish Whiskey added to black coffee. Optionally people add milk and cream and sugar, that overcomplicates what is a warming winter drink with a kick of booze. So, the complex instructions are, make a cup of fresh, black coffee (not instant), pour a glug of whisky in. Drink it hot. 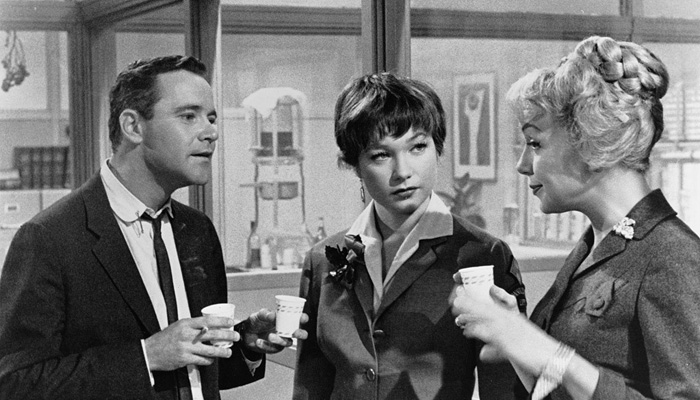 Nominated for ten Academy Awards, winner of five, a Billy Wilder-directed masterpiece starring Jack Lemmon and Shirley MacLaine. 'The Apartment' tells the story of an office worker, C. C. Baxter played by Lemmon, who is attempting to climb the corporate ladder by lending his apartment out to four senior managers in the company for their extramarital affairs. When he finds out the woman he's fallen for is seeing one of these managers. well, if you haven't seen it yet, we won't ruin it for you. But features a fantastic Office Christmas party scene, and the climax of the film happens at Christmas. So there's your seasonality box ticked.
For the time, this was a film that prompted a lot of moral questions around extra-marital sex, suicide, pre-marital sex, and the sexual politics viewed from our current position are pretty awful. That being said, Lemmon and MacLaine are perfect to watch on a cold, Christmas night. But what should you be drinking whilst watching it?
The Booze
It's New York in the 60s, if you've seen 'Mad Men' you should know what to expect. 'The Apartment' in the film is always crammed with bottles of liquor/hard booze.  The office party scene is wall-to-wall illegal office drinking. A bar scene features a couple of classic drinks.
Rum Collins, a rum variant on the Tom Collins, which is gin based. For this, you shake a large measure of rum with lime juice, sugar syrup (or a teaspoon of sugar if you can't be arsed with syrup) and ice. Strain into a glass, add a few ice cubes and top up with soda. Add lemon and a cherry if you're feeling flash. Sweet, fruity and smooth.
In the same scene Jack Lemmon's character is drinking Martinis, the classic cocktail. There are so many differing rules to get this right, but it's essence is near neat vodka or gin served cold. Purists say you should use gin for the flavour, most people use whatever they have in the house. Stick the bottle in the freezer and hour before you need it. Along with the glasses. Cold is essential.  The other main ingredient is vermouth, a fortified wine,  a famous brand of which is Noily Prat. The ratio of gin to Vermouth is up for debate, some like hardly any, even a swish around the shaker, other go for something like four/five to one. Bond likes his Martinis shaken, but we go for stirred. Mix the ingredients together with some ice, strain into the frozen Martini glass. Add a twist of lemon, olives are for pizzas. Drink it whilst smoking a fag out of the end of an empty biro case for a touch of class.
Tags:
christmasmovies