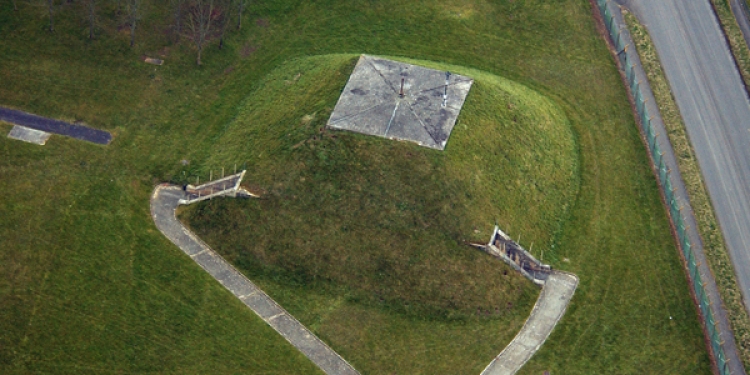 Photo: © Crown Copyright
Check out some of the most commonly discussed facts, myths and rumours relating to the secret network of tunnels, bunkers and quarries beneath Corsham and the surrounding area.

RAF Rudloe Manor in Corsham did deal with UFO research, but it wasn't sinister as some of the UFO conspiracy theorists in the mid-90s would have us believe. A recent Freedom of Information Act requests revealed that RAF Rudloe Manor was the "focal point" for UFO reports in the UK. Although Corsham was the central co-ordination point for reports of UFOs, that's as far as it went and all this work was carried out in ordinary above ground offices.

2. There Was No Underground Pub In Corsham

Claims that there is an underground pub in Corsham is one of the most common myths about the tunnels. The rumours say that there was a replica of the Whitehall pub the Red Lion but there was nothing so grand underground but there was a pub of sort, in the form of a mural painted in aircraft paints by artist, Olga Lehmann. The painting can be found on a wall in on of the bunker's six canteens, where may be the bunker's inhabitants might have been able to get a bottle of beer.

3. Burlington Is Connected To Other Underground Bases

There's a lot of stories about secret tunnels reaching out from Corsham, even as far as London where it's rumoured that a secret underground station links directly to Burlington - it's not true. However there are a few links between the quarries, this is mainly because of the haphazard way that stone was quarried, different workings would run in to each other underground. Spring Quarry and Tunnel quarry share a border, the ammunition depot in Monkton Farleigh Quarry is connected to Browns Folly Mine, Ridge Quarry adjoins Monks Park Quarry and a passage from Pickwick Quarry takes you under the A4 into the formal naval stores in Copenacre Quarry.

4. Burlington Sort Of Has Its Own Underground Train Station

Again this is another myth, according to rumours the Prime Minister could have jumped on a train at London Paddington, head for Bath but along the way vanish in to the hillside and straight in to the protection of Burlington. There is some truth in this story, there are two half-mile long train stations underground at Corsham on a branch line from the main line from London but these platforms were constructed during the Second World War as part of the underground ammunition depot in Tunnel Quarry - long before Burlington, the Cold War bunker was constructed. Until recently there was no underground link between Tunnel Quarry and Burlington so even if government staff from London had been brought in by train they would have had to make their way up to the surface in order to be taken down in to Burlington - the plan was always to fly the PM and key cabinet members out of London by helicopter.

It's a nice story but the truth is that Burlington is too old to have nuclear power. The construction of the bunker started in the 1950s and has had very little work carried out since, plus there are no nuclear generators in the UK which aren't near large bodies of water which is required for cooling a reactor.

Sadly not, the bunker isn't in great condition now-a-days, there is dry rot, uneven surfaces, debris, damp and in some places asbestos. The bunker would make a great tourist attraction but the cost involved to open in to the public are sky high.
© Crown Copyright Notice: This page includes images reproduced with the permission of the Controller of Her Majesty’s Stationery Office.
Tags:
undergroundurbex