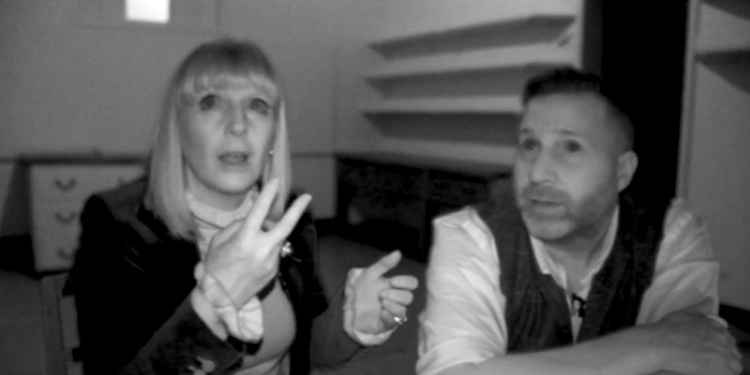 This is the second part of the Most Haunted team's investigation of Croxteth Hall in Liverpool, but will the episode match the excitement of the first part, the Halloween special?
The investigation of Croxteth Hall started with a two-hour long special shot at the manor house, which is said to be haunted by numerous ghosts which have been sighted by visitors to the property and even caught on CCTV. Some say the haunting could be caused by the spirit of a former resident, the second Earl of Sefton, William Philip Molyneux, it’s said his ghost wanders the grounds.
During the episode we witnesses a bottle hitting the floor, moved by an unknown force. A handful of cutlery was thrown, mostly at Karl Beattie who was hit in the head and hand, it even drew blood. While Stuart Torevell was hit with a rock while walking through the house.
The team witnessed slamming doors, growls and footsteps but it was what happened to Karl in one of the house's bedrooms which was the real standout moment of the show... 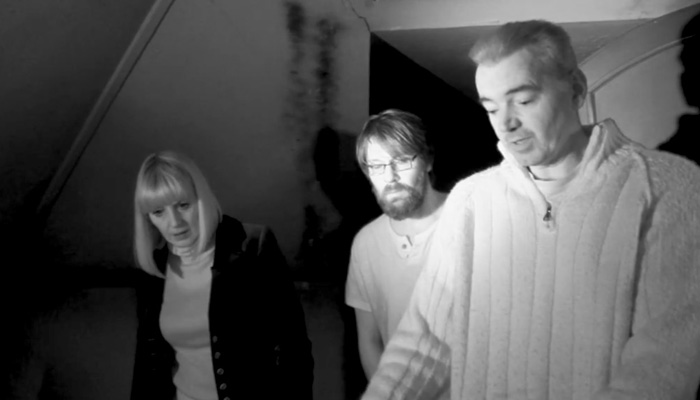 The episode continues where we left off with Karl explaining to the rest of the team that the moving bed was the "most bizarre thing ever, it's blown everything else out of the water."
From that point on the team went back out into the house armed with cameras to finish their investigations. Karl takes the gang back to room where he'd captured the bed move. After moving the heavy bad back into position and tidying the room which was trashed at the end of the last episode.
Stuart asked Karl what he thought about the bed moving, "to be honest, for the first time ever I don't want it to be paranormal. And the reason I don't want it to be paranormal is because both you guys you went to move that bed and you know how heavy it is. If something can move that bed so precisely, that bothers me because then you think, what can it do to a person?"
The show's skeptic Glen Hunt said, "it's just a head f**k because there is no rational explanation for it, is there. And the fact that you can't reason with it but it really happened. You're just pulling your hair out because again it doesn't give you any answers, it just gives you more questions." 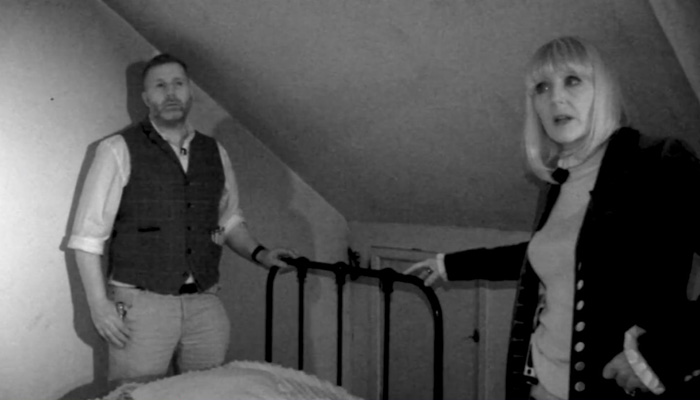 Yvette then leads a séance around the small table in the room and encourages the spirit to repeat their stunt, "can you move something in this room, whether it be the table, the bed. Make a noise, knock on the door."
Yvette then suggests standing around the bed with their hands on it, hoping the bed might move again in a twist of the commonly used practice of table tipping.
Yvette then tried singing "twinkle twinkle little star" in order to coax out the spirits of any children near by, but her music failed to wake the dead. 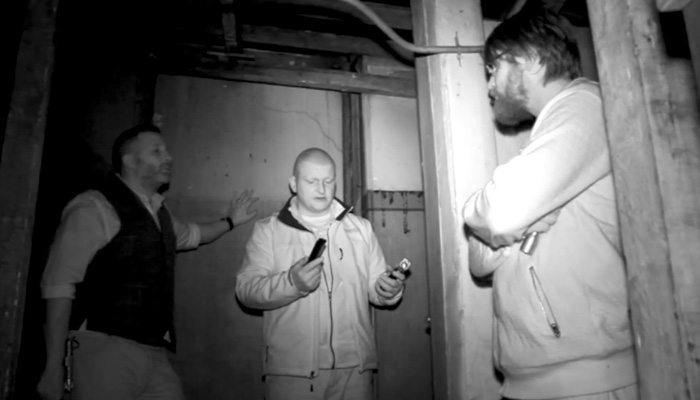 Then it was time to split up, so Glen took Stuart to a small attic area in the servants' quarters, joined by camera man Gregg Smith and sound engineer Darren Hutchinson. As soon as they'd reach the top of the stairs into the area, a door at the bottom of the stairs slammed loudly on its own.
The guys were intrigued to find that a piece of plaster that loudly fell to the floor, presumably from the wall was warmer than its surroundings. Glen, acting scientific, was using a thermal imaging camera and could see the piece of wall glowing, meaning it was warm than the floor it landed on.
This could mean that the plaster fell from a warmer part of the room, that someone or something was holding it and warmed it up with their body heat before throwing it, or that some kind of energy was applied to the plaster before it broke free from the wall. 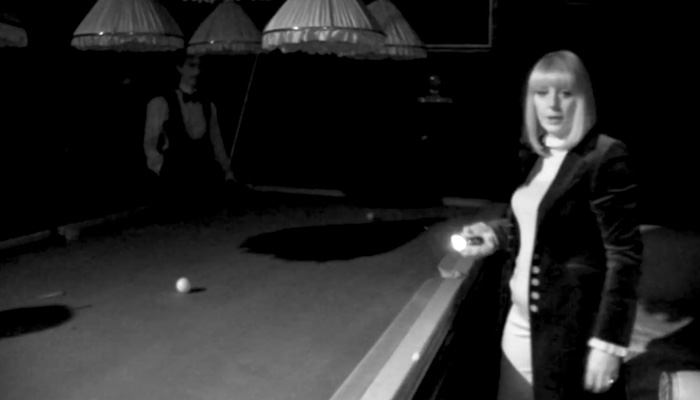 Meanwhile, Yvette and Karl headed to the creepy billiards room with the ghost hunting pooch, Watson.
Watson was noisily walking around the billiards table which prompted Karl to say to Yvette, "I can hear snorting, but that's generally one of two things. Watson or you walking." Yvette responded with, "that's not very nice is it".
As always, they heard a lot of tapping and knocking, which even Watson went to investigate, but to be honest it all felt a little anticlimactic after the drama of the first part of the investigation, that was until the next vigil.

Listening Back To The EVP Recording 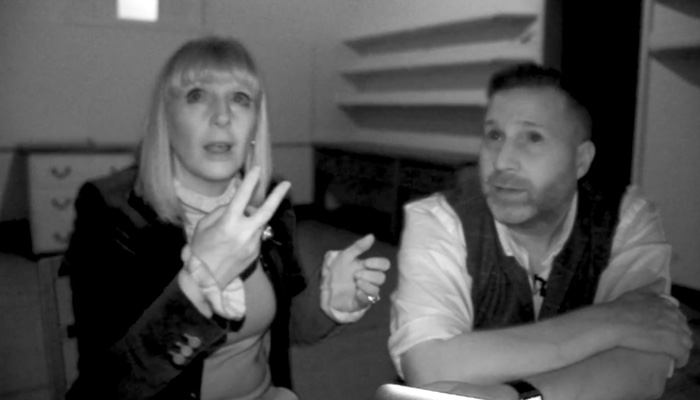 Yvette, Glen and Gregg went back to the kitchen where they'd left their EVP experiment running throughout the investigation, they were about to hear what we already had. It seems that for a second time they captured what sounded like scissors snipping, on hearing the sound Yvette covered her mouth in shock, "oh my God!"
The cutting sound was captured on both the laptop in digital form and on Glen's old analogue reel-to-reel tape recorder. Yvette doesn't like it at all, "I can't listen to this," adding "it's horrible, I really didn't think Corxteth Hall would be as violent as it has been".
Gregg then makes a great suggestion, "it'll be interesting to see if that ties in with the bit when we were upstairs earlier," the moment when the spirit had tapped out the phrase "cut all you". According to Yvette's voice over the cutting sound on the tape did come seconds after the the phrase was spelt out. 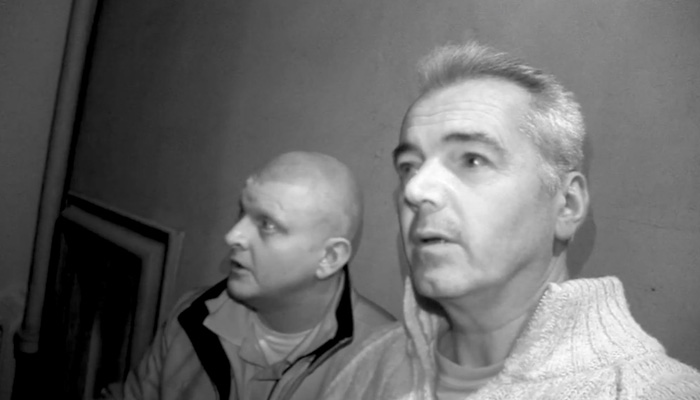 One of the funniest moments of the show happened when Karl and Stuart head off towards the attic, on the way they heard on odd whining sound, Karl was quick to say "children's laughter!" But Stuart wasn't sure, "meowing wasn't it?" Which amusingly seemed to confuse Karl, "a kid meowing?" Perhaps it was too late in the day for this. He eventually twigged, "oh, a cat."
And it was late, soon after the investigation drew to a close, ending a week of new Most Haunted episodes for Halloween.
The new series of Most Haunted continues with five more episode on Really. Watch on Freeview (17), Sky (155) and Virgin Media (129), or watch previous episodes of Most Haunted on demand on the UKTV Player.
For reviews of all of the new episodes, plus highlights and evidence from the shows, and to find out when Most Haunted is on next, visit the Most Haunted episode guide.