Do Children In The UK Pray To Santa Claus? 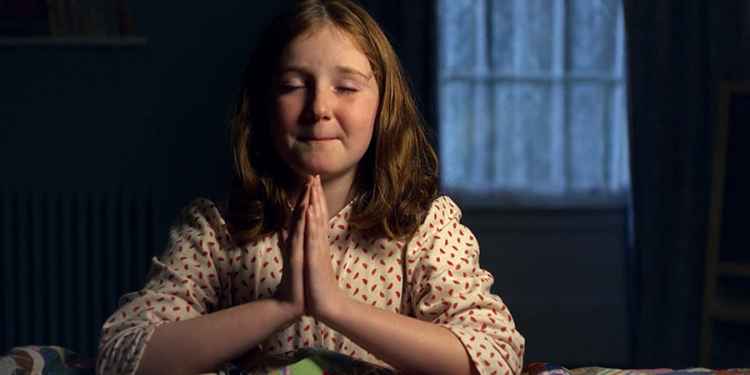 There's a bit of a modern legend circulating that children in the UK pray to Santa Claus. It's true that many kids worship Santa like a god, after all it is Santa who passes ultimate judgment and decides whether they should be placed on the naughty or nice list. But do children really pray to the jolly bearded one?
The myth seems to originate from the 2010 'Doctor Who' episode, 'The Eleventh Hour' when we first meet the Doctor's newest assistant, Amy Pond. We meet Amy as a child in Scotland where she appeared to be saying nightly prayers directed to her deity as some children do before going to bed.
Amy is played by the very talented Karen Gillan, but young Amy is played by Caitlin Blackwood. In the opening scene of the episode, which marks the start of series five, Amy is seen kneeling by her bed, but unexpectedly starts her session of worship by saying "dear Santa."
She goes on to say, "thanks for the dolls and pencils and fish." Not only is Amy praying to Santa, but this gives us the clue that she's talking to him after Christmas, implying that she might pray to him all year round.
She continues, "it's Easter now, so I hope I don't wake you, but honest it is an emergency." She then goes on to ask Santa not for gifts, but for help with a huge problem, "there's a crack in my wall". Amy begs Santa, "please, please could you send someone to fix it? Or a policeman, or a..." and at that moment the Doctor arrived.
So, is this the behaviour of a typical seven-year-old girl living in Britain? Well, no. In fact as a child in the 1980s, Amy would be unlikely to use the name Santa Claus and much more likely to call her hero Father Christmas. At this time Santa Claus was more of an Americanism made famous in Britain through Hollywood films.
It is pretty common for children in the UK to write to Father Christmas in December to tell him what they want for Christmas, of course whether they get it or not depends on whether they are well behaved in the run-up to December 25th.
The real reason why Amy was praying to Santa is that she is a little odd, hence why the Doctor chose her. Amy sees the world in a different way and from a different point of view from other people. She also had an unconventional upbringing, as her parents weren't around when she was growing up.
The reason Amy's parents weren't around is also the reason why Amy was praying. Perhaps she'd already tried praying to God or the little baby Jesus, but she was getting desperate, she was terrified. Later in the series we learn that the crack in Amy's wall is in fact a crack in time and Amy's parents had been sucked it through when she was younger.
Doctor Who is known for its moments of humour, and this was just one of them. The aim of the scene was just to show how scared young Amy was and the writers did so without getting bogged down in religion.
However, with a record number of British people saying they now have no religion, perhaps kids will turn to Santa in their nightly prayers.
A recent survey found that 53% of the British public say they are not at all religious. Although back in the 1980s, when Amy would have been a child, the figure is much lower, when just 30% of people deemed themselves non-religious.
Tags:
christmastelevisionscience fiction