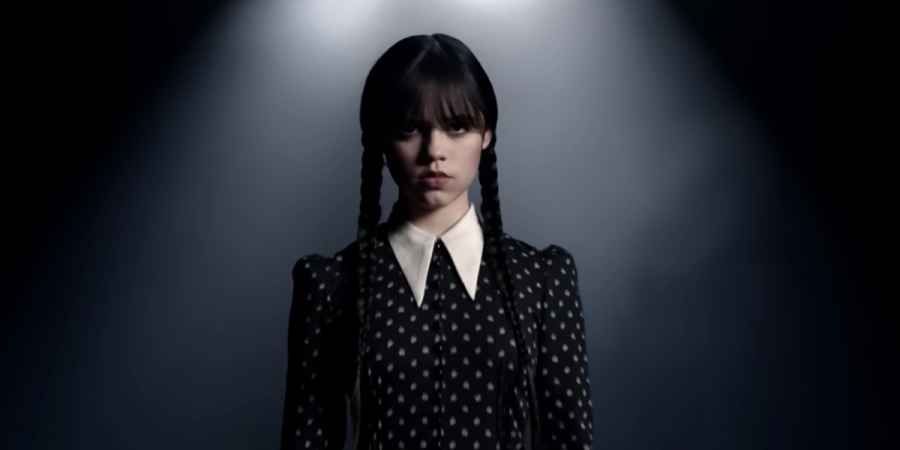 Photo: © Netflix
Netflix has dropped a teaser trailer for their upcoming supernatural series called 'Wednesday' and revealed Jenna Ortega as the title character of the Addams Family inspired series based around Wednesday.
Jenna Ortega will play the lead role of Wednesday Addams. Like Christina Ricci, Jenna who is now 19, also began her career as a child actor, with roles in films such as 'Insidious: Chapter 2' and more recently the 'Scream' reboot.
The character of Wednesday Addams first appeared along with the rest of the creepy clan as a cartoon strip in the American magazine The New Yorker in 1938, the creation of Charles Addams, a cartoonist known for his darkly humorous and macabre characters.
Christina, who appeared in the 1990s movie versions of 'The Addams Family' will also be returning. Deadline first broke the news that Christina was joining the eight-episode Netflix series. Details of her role remain a mystery, but it's been confirmed that Christina will not be playing an older version of her iconic character in the live-action project.
The character of Wednesday was most famously played by Lisa Loring in the 1960s television series, with an 11-year-old Christina appearing as Wednesday in the 1991 movie, 'The Addams Family' and in its 1993 sequel 'Addams Family Values'. The role was most recently played by Chloë Grace Moretz, who provided her dry and moody voice in the 2019 animated reboot of the franchise.
The new Netflix series is described as a sleuthing, supernaturally infused mystery charting Wednesday Addams' years as a student at Nevermore Academy. Wednesday's attempts to master her emerging psychic ability, thwart a monstrous killing spree that has terrorised the local town and solve the supernatural mystery that embroiled her parents 25 years ago — all while navigating her new and very tangled relationships at Nevermore.
The series, which is directed by Tim Burton, who was originally slated to direct the 1991 movie, but ended up passing up on the job due to scheduling conflicts. It will also star Catherine Zeta-Jones as Wednesday's mother Morticia Addams and Luis Guzmán as her father Gomez Addams, with Burton-favourite Danny Elfman providing an original theme and score.
There's not yet a release date for 'Wednesday' but all eight episodes are expected to premiere on Netflix later in 2022.
Tags:
netflixmoviescomedytopical