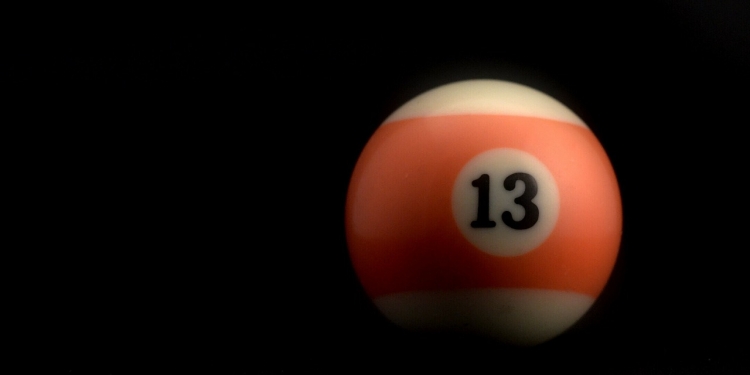 Photo: pixabay.com
Thankfully Friday the 13th doesn't come around too often, but when it does it's considered to be the most unlucky day in the calendar.
While some dismiss the curse of Friday 13th as nothing more than a silly superstition, others are genuinely scared by the claim. The fear of Friday the 13th is even recognised by psychologists as paraskevidekatriaphobia.
And perhaps paraskevidekatriaphobics have a point, it's been claimed that around $900 million is lost each Friday the 13th due to people being too scared to work and travel on this date, many opting instead to remain in the safety of their own bed all day.
But, is it safe in bed? In 1976, Daz Baxter was apparently so scared of Friday the 13th, that he stayed in bed all day. But this didn't help him, he was killed in his bed when the floor of his New York apartment block collapsed.
In many Western countries, including the UK, some tall building and hotels don't have a 13th floor, and streets often don't have a house numbered 13.
In Somerset, an old saying states that if you turn a bed on a Friday, you turn a ships at sea and in Cumbria, babies born on a Friday were once laid on a Bible to avoid bad luck. Cutting hair and nails on a Friday is also said to be bad luck.

The Next 13 Occurrences Of Friday The 13th

Why Is Friday The 13th Said To Be Unlucky?

Going back centuries both the number 13 and Fridays have been said to be unlucky, so when the 13th day of the month falls on Friday the bad luck is amplified. The tradition was possibly started in the UK when Fridays were known as "Hangman's Day," the day when people who had been condemned to death would be hanged.
But, the curse of a Friday goes back even further, as far as the Bible in fact. It's said that it was a Friday when Eve bit the apple from the tree of knowledge, resulting in her and Adam's ejection from the Garden Of Eden.
The bible also states that the great flood started on a Friday, and of course it was the day that Jesus was crucified. The night before at the last supper, 13 people were present. The 13th person to sit down at the meal was Judas, who went on betray Jesus.
Perhaps it is the last supper and Judas which ties Friday and the number 13 together. But has also been associated with bad luck independently for just as long as Fridays has.
The claim that 13 is unlucky is probably related to the historical belief that 12 is considered to be the number of completeness. There's 12 hours on a clock face, 12 months in a year, 12 in a dozen, and 12 gods of Olympus, plus many more examples. Add one to 12 and you destroy the balance.
13 people at the last supper proved to be unlucky for Jesus, and it's for this reason that there's a superstition that warns against having 13 people sat to dinner as one will surely die. This could also relate to Norse mythology, and the story of 12 gods who were having dinner together in Valhalla, their heaven. Part way through dinner an uninvited 13th guest arrived, Loki, who caused the world to be plunged into darkness.
"and on a Friday fell all this mischance."
Geoffrey Chaucer's 'Canterbury Tales'

The History Of Bad Fortune On Friday The 13th

1. Knights Templar Executed
On Friday 13th October, 1307, the King of France Philip IV and the Pope ordered the death of hundreds of the Knights Templar.
2. Buckingham Palace Bombed
Friday 13th September, 1940 is the day when five German bombs hit Buckingham Palace during World War II. The bombing raid nearly killed both King George VI and Queen Elizabeth. Only one member of the royal staff died and just the palace's chapel was destroyed.
3. Swedish Plane Vanishes
On Friday 13th June, 1952 a Swedish military DC-3 plane and its crew of eight disappeared over the Baltic Sea. For decades conspiracy theorist speculated about the fate of the plane, until the Soviet Union admitted they had shot it down in 1992.
4. The Birth Of The Genovese Syndrome
In March 1964, a bar manager named Kitty Genovese from Queens, New York was repeatedly stabbed by a stranger in an attack that lasted over half an hour and was witnessed by 38 people. Not one of the witnesses reported the attack, when questioned by the police they said they'd thought it was a "lovers' quarrel". The murder resulted in what is now known as the Genovese Syndrome, also known as the bystander effect.
5. Bhola Cyclone
A devastating tropical cyclone killed 500,000 people when it struck Bangladesh on Friday 13th November, 1970. It is one of the most catastrophic natural events of all time and cost the country $86.4 million in damage.
6. Andes Flight Disaster
In 1972, Uruguayan Air Force Flight 571, a chartered flight carrying 45 people crashed in the Andes on Friday 13th October. Most of the passengers died during the crash or soon after, but ten weeks later 16 survivors were discovered and it was revealed that in order to survive, they were forced to eat the bodies of dead passengers that had been preserved in the snow.
7. IBM Computer Virus
The destructive "Friday the 13th" virus crashed thousands of IBM computers in the UK in 1989. The virus was programmed to permanently delete programme files and personal data from infected machines on Friday the 13th.
8. Stock Market Crash
On a Friday the 13th in 1989, the second most damaging crash in market history at the time occurred. Brokers watched as the Dow Jones Industrial Average dropped down 190.58 points, of course this crash was beaten by the Global Financial Crisis in 2008.
9. Tupac Shakur Died
On Friday 13th September, 1996, US rapper Tupac Shakur died as a result of being shot multiple times in a drive-by shooting six days previously. Following Tupac's cremation, his posse mixed his ashes with marijuana and smoked them.
10. 'SAW' Ride Failed At Thorpe Park
In 2009, the 'SAW' ride at Thorpe Park, which cost £13 million to build was shutdown on its opening night due to a technical fault.
11. Struck By Lightning
On Friday 13th in 2010, at exactly 13:13, a 13-year-old boy was struck by lightning in Suffolk.
12. The Costa Concordia
30 people died in 2012 when the Costa Concordia cruise ship ran aground on Friday 13th January. The ship had over 4,000 passengers and crew onboard when it lost power an hour into a Mediterranean cruise and partially sank just off Giglio Island.
13. Paris Terror Attacks
Terrorist group ISIS carried out seven coordinated attacks in Paris on one evening, killing 130 people on the 13th of November 2015.
Add A Comment
Tags:
superstitionstopical