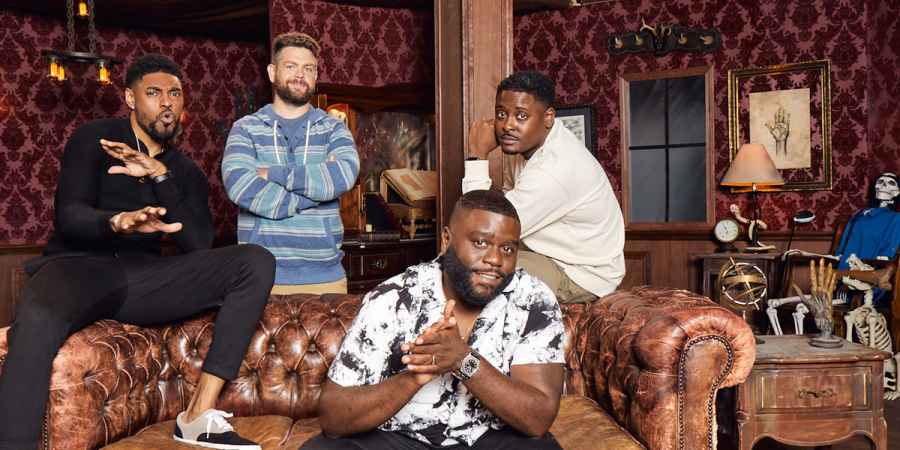 Photo: © Discovery+
Come party with the paranormal in round two of 'Fright Club', an all-new season premiers on June 30 on the Travel Channel and Discovery+.
Jack Osbourne and the Ghost Brothers serve up more paranormal insanity in the hilarious and spooky competition. It's creepy, raucous and a freaky good time – welcome to round two of 'Fright Club!'
Paranormal investigators Jack and the Ghost Brothers' Dalen Spratt, Juwan Mass and Marcus Harvey are back in club headquarters resuming their hilarious competition to creep each other out with the craziest paranormal videos they can find.
The new season returns with ten all-new episodes beginning Thursday, June 30 on the Travel Channel in the US and premiere the same day on Discovery+.
Game on! The rules are the same, but the competition is bigger, and a few special guests are now getting in on the action. In each episode, Osbourne and the Ghost Brothers share jaw-dropping videos of UFOs, ghostly apparitions, poltergeists, cryptids and all the unexplained that’s in between, imparting their characteristic witty flavour into their expert analysis of each one.
They'll talk with the witnesses who captured the footage and get intel from psychics, historians, cryptozoologists and more before ultimately voting on each episode's "nightmare clip" – the winner of the wildest video takes home the coveted Golden Boo statue. This season, a few familiar faces join the party to share videos, insight and their own paranormal stories, including Howie Mandel, Tommy Davidson, McKayla Maroney, Jay Mewes, Montel Williams, Jamie Kennedy and Richard Lawson.
"This is the most fun you will ever have watching scary videos," said Jack. "It's like a paranormal party with your friends – if your friends are the funniest guys on the planet."
"At this point, Jack is like our brother from another mother…and after the clips he brought this season, it MIGHT be time to make him the 4th Ghost Brother!" said Dalen. His team mate, Juwan, added "this season the guests are legendary, the jokes are next level and the paranormal clips are mind-boggling. The competition gets intense as we give it our ALL for the Nightmare clip!" Marcus stated, "this season, the jokes and wild videos are coming in hot. The fellas are playing for keeps this year."
In the season opener, Jack and the Ghost Brothers bring out the most insane paranormal evidence they can find. Spratt shares footage of the Loch Ness Monster and invites special guest Howie Mandel to weigh in on a ghostly encounter ripped straight from a horror film. Juwan brings in some cursed objects but probably should have thought it through first. jack shares a video of a cave-dwelling demon that met its match in the form of a supernatural street fighter. Finally, Marcus shows the guys a genuine werewolf along the trail to grandma’s house. Who will take home the most coveted trophy in all of horror – the Golden Boo?