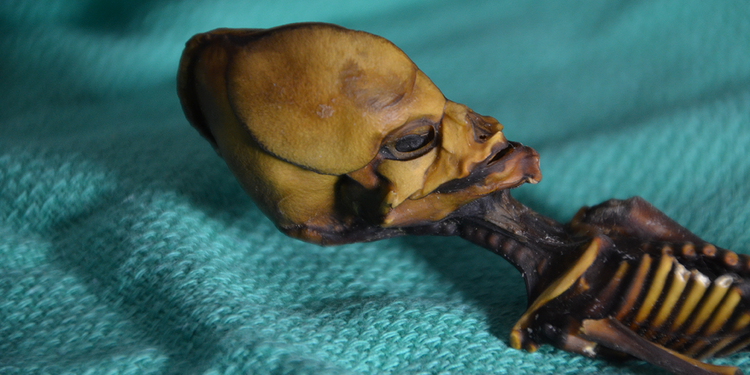 Photo: coi.tothestarsacademy.com
Close encounter of the scientific kind proves body found in Chile's Atacama desert in 2003 was human.
The Atacama alien, a humanoid body found in 2003 in the Chilean mining town of La Noria, has attracted huge amounts of interests since it's discovery. The body was only six inches long, but the bones showed some features which you would normally see in a six to eight-year-old. The head was also elongated, and instead of the usual 12 pairs of ribs, the body had only 10.
So bizarre was the body, known as Ata, that some people were convinced it could only be extra-terrestrial in origin, or else some kind of alien-human hybrid, or even perhaps some kind of 'hobbit'. Others thought perhaps it was an elaborate hoax.
Once again, science has come to fill the void of information where idiots can often be found. In this case it was Professor Garry Nolan, a microbiologist and immunologist at Stanford University in California.
Professor Nolan and his team managed to extract DNA from the bones of the Ata and study her genetic make up. Employing advanced algorithms running on supercomputers to search through Ata's DNA they were hoping to find isolate the portions of her DNA that gave rise to the unique look of the body. 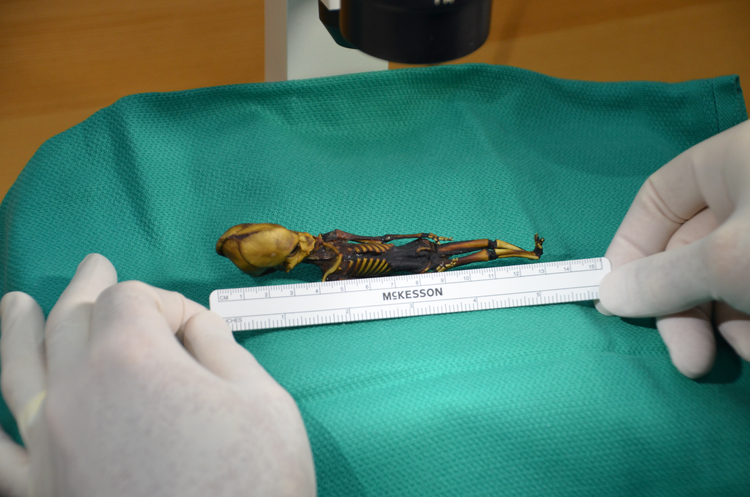 Photo: coi.tothestarsacademy.com
They found out Ata was female, and who had mutations in at least seven of her genes which would give rise to major skeletal malformations. This combination of these malformations would account for her size, skull, ribs and the apparent age of her bones. She may also have suffered from a diaphragm which would have caused her problems with breathing.
How she died cannot be answered from the genetic evidence, but Professor Nolan believes she was possibly stillborn or would have died very soon after birth. He dates her time of birth to the early 1970s, forty years before her body was discovered.
But beyond all the guff about aliens and human-alien hybrids which grew up around this body, Professor Nolan wants us to think about the reality of this story. As he says:
"Ata is a story of a human tragedy.  Someone had a baby with catastrophic birth deformities.  A young girl died early, became an international story about aliens, but also taught us a series of lessons which we might eventually turn around to help patients."
Professor Nolan has shown that by using his scientific knowledge in an area that mainstream science had shown little interest, he was able to move our knowledge further along. The discovery of how the mutations may have affected Ata's bones could be used to help treat patients with skeletal problems, perhaps those seriously injured in car crashes, for example.
You can read more from Dr Nolan on this fascinating story here https://coi.tothestarsacademy.com/atacama-skeleton/
Add A Comment
Tags:
unexplainedufos

The Fantastic Beasts That Might Be Living In Your Home