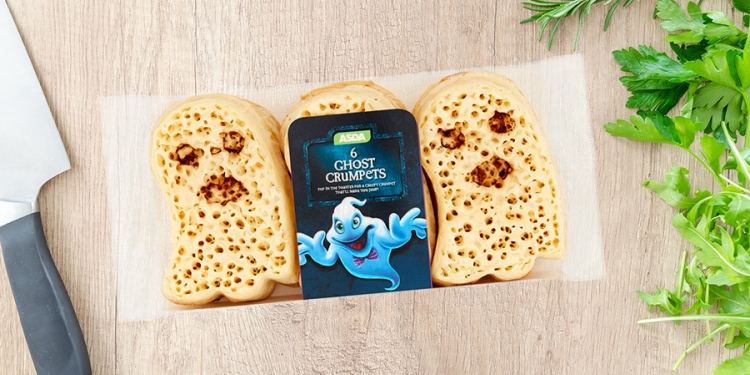 Supermarket chain ASDA are helping shoppers get in the mood for Halloween with the launch of their spooky ghost-shaped crumpets, which are available in stores now and throughout October.
The chain tweeted the news of the seasonal new product to its followers, saying "pop these in the toaster for a creepy crumpet that'll make you jump!"
The crumpets, which are shaped like the classic bedsheet-style ghost, were released in stores from October 4th and are available in packs of six for just £1.
If you're not from the UK, then you probably have no idea what these ghoulish snacks are. They're a small griddle cake made from an unsweetened batter and eaten all year round, but rather than being ghost-shaped, they're usually round.
There's nothing like a hot toasted crumpet, but the question remains, what is the best topping to ensure you maximise the freaky factor of your toasted treat?
The most popular toppings range from a simple covering of butter or toasted cheese, through to more indulgent options such as layered Nutella and peanut butter, known as a "Snickers Crumpet."
Perhaps the perfect choice for Halloween is some blood-red strawberry jam. ASDA say, "these spooky treats are best lightly toasted until golden brown, topped with lashings of melted butter and jam."
The crumpets continues ASDA's trend of selling creepy Halloween crumpets, last year's offering was spooky pumpkin face crumpets. Luckily, the pumpkin crumpets didn't taste like the seasonal plant, but had a creepy Jack-o'-lantern face.
Add A Comment
Tags:
halloweenhalloween 2018topical