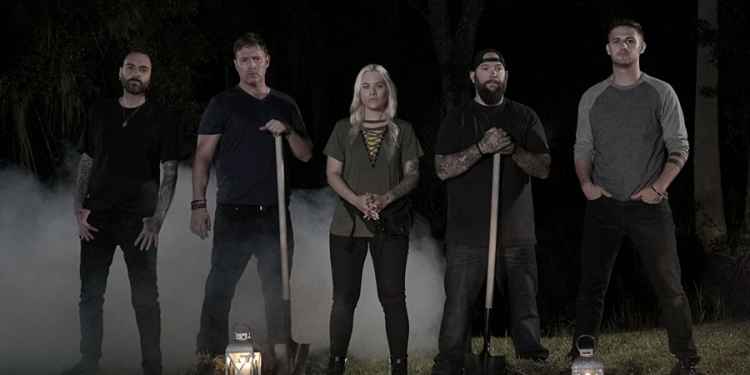 Really once again proves that their weekly Freakend schedule of ghost hunting shows makes them the go-to channel for fans of American paranormal shows as they add 'Ghost Loop' to their Thursday night lineup.
The shows starts at 9pm on Thursday 19th March, replacing the slot previously occupied by 'Ghost Nation', which comes to an end this week. 'Ghost Loop' follows paranormal investigator and medium Sean Austin, empath Kris Star, researcher and tech advisor Chris Califf, design specialist Eric Vitale and tech support Matt Lytle.
The term "ghost loop" is meant to refer to the phenomenon of repeating hauntings, more commonly known as residual hauntings. The show describes this as "endless and repetitive supernatural cycles, manifesting again and again in the same location." Throughout the series, 'Ghost Loop' team aim to focus on this distinctive type of haunting in an attempt to break cycles of trapped paranormal activity and restore peace by drawing out each spirit through re-created trigger environments.
In each hour-long episode, the team examine and research a different haunted location, delving into its history and the reported hauntings, before conducting a preliminary paranormal investigation. Taking their facts and findings, they formulate a plan they believe will help stop the haunting. Whether it's building a 1900s-era train compartment, replicating a tavern from the 1850s, or constructing a 19th century baby's nursery, the team uses each emotionally charged setting to draw out the entities during intense follow-up investigations. Hoping to engage the spirit, the group aims to release the energy and break the loop once and for all – bringing peace to everyone involved.
In the show's first episode, the team head to Houston, where homeowner Becky is terrified by sounds of someone breaking into her home night after night – only to encounter an aggressive male entity that routinely attacks her. On their preliminary investigation, the 'Ghost Loop' team seems to get picked off one by one - Kris gets sick, Matt is overwhelmed by a burning sensation on his body and Califf and Sean get into a conflict fuelled by the angry spirit.
Through their research, they discover that in 1921, a murder occurred in the home involving a young woman and her abusive boyfriend, whom she shot in self defense. In order to stop the dangerous activity in Becky's home, the team builds an environment that mimics the fateful night – and use Kris to elicit the spirit.
Later in the series, the ream visit Palatka in Florida, where homeowner Theresa is being terrorised by an entity that crawls across the ceiling from one of her son's bedrooms to another. They also attempt to help a mother and her young children in Lubbock, Texas, who are being haunted by a malevolent spirit known as the Tall Man.

Sean Austin
Sean, from Westchester, New York, began investigating 11 years ago when he gathered his first paranormal evidence in a graveyard - an EVP recording of a young girl's voice. He later apprenticed with noted demonologist Ralph Sarchi, under whom Sean learned the crafts of paranormal investigation, mediumship and demonology. A practicing Catholic, Sean feels that paranormal investigation is his calling, not only to bring ease to the living but also peace to those spirits trapped on this plane.
Kris Star
A native of Clifton, New Jersey, Kris has been involved in the paranormal since she was five years old, when she encountered her grandfather's spirit after he passed. This occurrence unlocked her gift of sight, which became apparent when she found she could sense haunted spaces and the entities trapped within them. Her sensitive aunt and paranormal investigator uncle mentored her in becoming an empath and clairsentient. Kris' goals are to help the living understand the spirit world and to bring peace to spirits locked in ghost loops.
Chris Califf
Chris began investigating in his home town of Salem, Oregon when he was just a teenager, in an attempt to contact his father who had passed away. Fifteen years later, he believes that technology and research are the best way to prove or disprove paranormal activity. His love of history also aids him in his exhaustive searches for the root causes of the ghost loops.
Eric Vitale
Originally from Rochelle Park, New Jersey, Eric has been investigating the paranormal for six years and is heavily influenced by the work of paranormal pioneers Ed and Lorraine Warren. He finds he is often drawn to dark, dangerous cases that involve evil and sometimes demonic entities. He feels the team's use of trigger environments are a surefire way of communicating and eventually crossing over trapped spirits. Eric feels his Catholic faith guides him in his mission to help families in need.
Matt Lytle
Matt had his first paranormal experience when he was 15 years old, after witnessing his recently passed grandmother comforting his sleeping grandfather. He's investigated the paranormal ever since and two years ago discovered he had the gift of clairsentience. Born in Indianapolis, Indiana, he is the youngest of the group and feels blessed to be part of such an experienced team.
'Ghost Loop' was originally produced by Essential Media Group for the US Trvl Channel, but in the UK will air on Discovery owned Really channel as part of their weekly #Freakend event, which begins on Thursday nights at 9pm with 'Ghost Loop'. This is followed by 'Paranormal Lockdown UK' at 10pm and documents the adventures of another US paranormal team consisting of Nick Groff and Katrina Weidman.
The network's ghostly offering continues from 9pm on Friday night with 'Destination Fear', and at 10pm repeats of recent 'Most Haunted' episodes. Yvette Fielding and the team are followed by 'Ghost Adventures', which has been pushed back an hour to 11pm, but viewers will be treated to a double bill of Zak Bagans and GAC.
You can watch 'Ghost Loop' on Really on your television in the United Kingdom and Ireland on Freeview (17), Sky (142), Virgin Media (129) and Freesat (160), plus YouView, BT TV and TalkTalk TV. Or watch previous episodes of #Freakend shows on demand on dplay.
View Comments
Tags:
paranormaltelevisiontopicalghost loop