Why Don't We Ever See The Ghosts Of Cavemen, Neanderthals & Other Early Hominids? 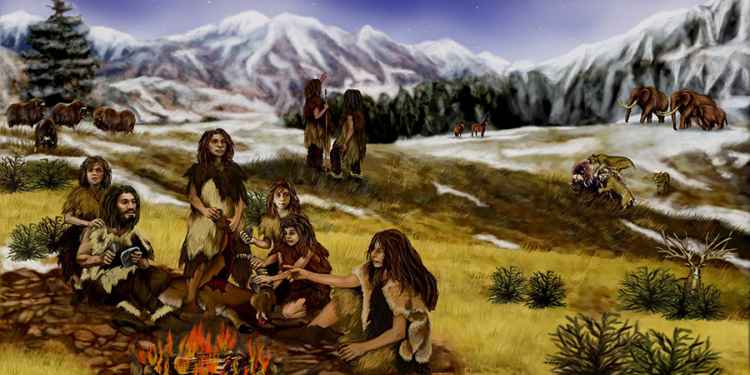 Photo: pixabay.com
Every year hundreds of people report seeing ghostly apparitions, everything from ghosts of smugglers and pirates, to ladies in white, victims of murders and countless headless horsemen. But, have you ever wondered why we only ever see the ghosts of modern humans, never cavemen, neanderthals or any other early hominids. Is there something special about homo sapiens that causes hauntings?
The most frequently reported ghosts seem to be soldiers from the English Civil War, as well as the First and Second World Wars. Then there's the ghosts of men, women and children often dressed in Victorian attire, and the victims of accidental deaths, murders and suicides.
Sightings usually revolve around spirits from the 11th century through to ghosts and spirits of the present day, reports of hauntings from any earlier than this are very rare, other than the odd Benedictine monk and Roman soldiers who some how seem to "live" on. The last Roman soldiers left Britain in the 5th century.
Even the 5th century isn't that long ago, in fact it's just a blink in the eye of humans' time in Britain. Researchers have discovered stone tools in Norfolk that suggest that early humans arrived here nearly a million years ago, perhaps even earlier.
At this time it would have been homo antecessor making Britain their home, an extinct human species more commonly known as "Pioneer Man". So why don't we see the ghosts of the Pioneer Man roaming the Norfolk countryside where their tools were found?
The most obvious explanation is that humans need to cross some kind of threshold of consciousness, intelligence or emotional development in order for our spirits or residual energies to remain in a location and haunt it as a ghost. This would be a reasonable explanation and perhaps the end of the debate, if it weren't for the fact that the spirits of much less intelligent and self-aware beings are seen.
Most ghost stories that people share are of spirits that take human-form, but as animals are so woven into are lives and human history, it's not unheard of to see the ghosts of dogs, cats and other animals roaming around in haunted houses. The ghosts of animals including horses are often seen on the sites of battlefields. Carew Castle in Wales is said to be haunted by the laughing ghost of a murdered pet monkey, and even the Tower Of London is haunted by the ghost of a bear.
Tales of phantom horses are quite common, there's even a cliff in Texas that was the site of a stampede, which resulted in hundreds of horses falling to their death. Today it's said you can still hear the sound of horses running towards their death.
It gets a little more complex, because it's not uncommon for the ghost of a horse to be pulling a phantom carriage. There's also many stories of ghost trains and even ghost ships. These were never living things, so consciousness or sentience can't play a part in determining who or what returns as a ghost.
There is one other explanation and that's simply that there's a limit to how long the energy of the dead can live on in the form of a ghost. Perhaps that limit is 2,000 years, 5,000 years, who knows, but we're yet to see the terrifying ghost of a dinosaur stomping along a suburban street.
The skeptics amongst us will tell you that the reason why the vast majority of ghost date back to Victorian times, with the rest peppered throughout human history going back about 2,000 years, is due to modern storytelling.
One of the most famous ghost stories of all times is Charles Dickens' classic 'A Christmas Carol', and it's Dickens and other authors of his time that not only cemented many of our modern day Christmas traditions, but also what we expect from a good ghost story or haunting.
Victorians had a fascination with death and mourning, and a literal morbid interest in the afterlife. It was the time of séances where fraudulent spiritualists attempted to contact those who'd recently died.
Until Dickens' time, stories were told and handed down verbally but Dickens was amongst the first to see the commercial opportunity and published 'A Christmas Carol' in 1843. When it comes to ghost stories, Dickens wasn't alone in striving for commercial success, publishers had also spotted the opportunity, and ghost stories tended to be short, cheap, and lived on.
It's for this reason that most ghost stories, ghost sightings and hauntings fall within the rules and expectations set by the early authors of ghost tales. Ever since this belief system has been added to and maintained through works of fiction, through the publication of details of paranormal investigations, and as a result of paranormal incidents being reported by the press.
One closing thought... could sightings of Big Foot actually be the ghosts of neanderthal man?
Tags:
paranormalghosts