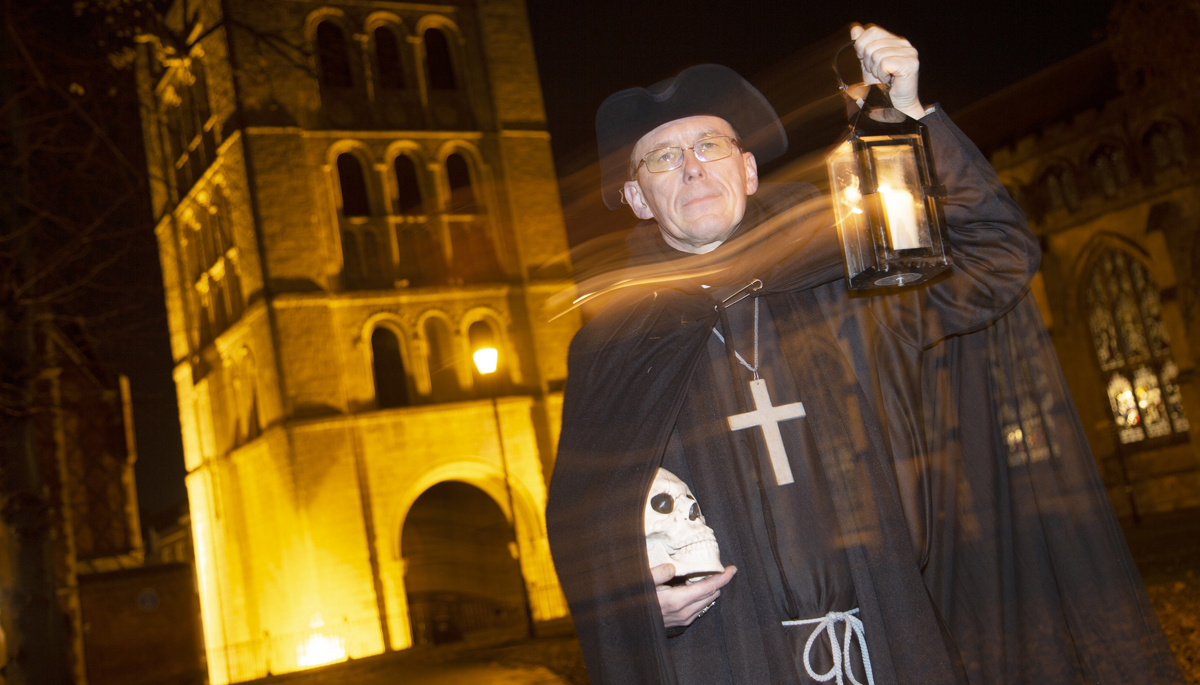 Photo: © Phil Morley
From ghostly medieval monks to the infamous Grey Lady, the historic town of Bury St Edmunds in Suffolk offers chills and thrills galore. Could it be the most haunted place in England? There are evening ghost tours, events for children and families, pumpkin patches to visit and eerie churchyards to walk through this Halloween.

22 - 30 October, 10.30am - 4pm
Bring your little witches and wizards for some spooky and safe half-term fun and enter a magical Halloween world at Kentwell Hall's Halloweenies School for Sorcery, near Bury St Edmunds. Explore the spooky outdoor zones around the buildings and 30 acres of gardens and grounds for immersive Halloween fun, challenges and activities aimed at children from 3 to 14 years of age and their families.
Come dressed in your favourite Halloween outfit but as this is an outdoor event ensure you are wrapped up warmly underneath; the house will be closed to visitors.
A selection of ghoulishly delicious food and snacks will be available as a take-out service.
Halloweenies runs from Saturday 22 until Sunday 30 October, 10.30am-4pm, last entry at 2pm. Adults and children aged 6-15 from £18.90; children 3-5 years from £14.45; under 3s free; family (2+2) from £62; book online to save on the ticket price. Advance booking required as numbers limited. For details call 01787 310207 or visit kentwell.co.uk.

From November to March
Uncover spine-tingling tales about Bury St Edmunds eerie goings-on by joining an evening, 90-minute Ghostly and Macabre guided walk around the Suffolk town over the Halloween weekend with start times between 6pm and 7pm. The walks continue every Friday from 4 November until 23 March 2023.
Dressed in character, the Bury St Edmunds tour guides will take you on a haunted journey with ghostly stories of murder, riots, plague, witchcraft and a mummified cat, with chills and thrills galore. Starting with Moyse's Hall, the tour winds around the darkened spooky streets to tell stories of screaming skulls, mysterious ‘monk' like figures appearing in cellars, burnings and hangings and more, finishing up in the dark and deserted Great Churchyard where the tour guides will recall stories from the Abbey and the infamous Grey Lady.
Details about the Ghostly and Macabre tour priced at £7.50 per person and how to book are shown at burystedmundstourguides.org or call 01284 758000; due to the content of the tour, participants must be aged 14 years or over and under 18s accompanied by an adult, dogs are not permitted. Tickets limited to five per customer.

The Athenaeum, Bury St Edmunds Saturday 29 October, 7:30pm – 11:45pm
Dress in your finest Halloween inspired Victorian fashion and go along to the All Hallow's Eve Ball at The Atheneum; gentleman are required to wear a Victorian frock coat/evening or regency attire. This is a strict dress code, steampunk or modern Halloween/theatrical costumes will not be allowed. There will be dancing to the Warleggan Village Band and a finger buffet, the bar will also be open all evening. To book tickets at £100 per person and for more information email regency83@hotmail.co.uk; organised by LK Present to Past. Over 18s only.

Moyse's Hall Museum
Horrible Histories creator Terry Deary has helped Moyse's Hall Museum bring Bury St Edmunds' gruesome history to life by linking the museums' most horrific artefacts to six Terrible Tales, each told in first person. The Battle of Fornham is spoken through the eyes of a blacksmith, while a nun tending to the body of St Edmund tells of his grisly end. The stories of Mary Tudor, Queen of France (who is buried in St Mary's Church, Bury St Edmunds), the Red Barn Murder, the Nichols Murder, witchcraft and Witchfinder General Matthew Hopkins, all feature.
There are also some grisly interactive displays for children and adults. Step inside a gibbet cage (made for the museum by blacksmiths Kingdom Forge), try on a ball and chain for size, experience the smells of history including the wretched tanner's pits, handle thumbscrews, try on manacles and pick up a Norman sword. You can even trace the artefacts in the Red Barn Murder including the murder weapon and the disease box, where visitors can smell a pus ridden hand, is likely to be a museum favourite!
Terrible Tales is a permanent exhibit at Moyse's Hall Museum but particularly fun to explore during Halloween. For more details visit moyseshall.org, Tel: 01284 706183. Admission adults £12, children (5-16) £6 and concessions £8. Open Mondays to Saturdays 10am - 5pm. Sundays 12pm - 4pm.

Opening around October half-term when the pumpkins are ripe for picking, this year's pumpkin patches are likely to include the Rougham Estate, where a field full of different varieties and sizes will await collection. Grab a wheelbarrow and choose your perfect pumpkin to carve into spooky faces or scary scenes this Halloween. There will also be some family games and activities and light refreshments roughamestate.com.

Where To Stay & More Information

The town centre Angel Hotel has rooms from around £139 B&B for two sharing, it's also home ot the AA two rosette Eaterie restaurant. To book visit theangel.co.uk or call 01284 714000.
For more information about Halloween events, where to stay and other things to see and do visit burystedmundsandbeyond.co.uk. 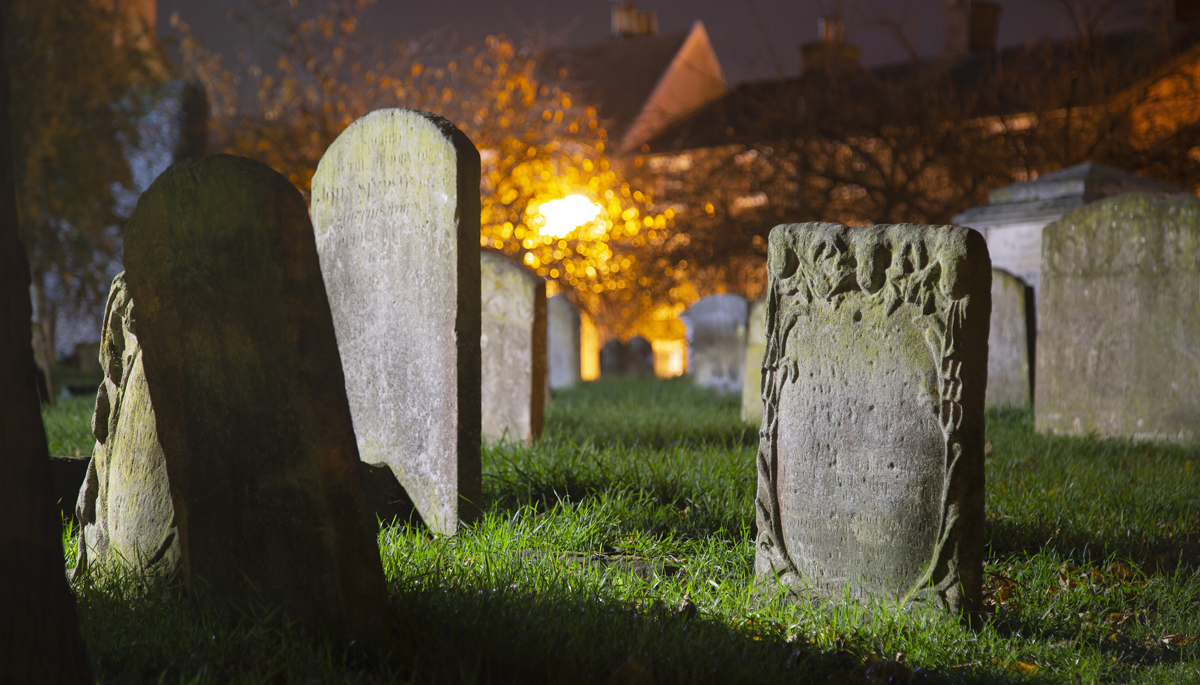