This article is more than four years old and was last updated in January 2021.

We've all read the books, watched the movies over and over, and even taken the Hogwarts House Quiz to find out which part of the famous castle we'd live in, but how well do you really know the locations from the movie?
We all know that Alnwick Castle in Northumberland was used for some of the exterior shots of Hogwarts, London's Claremont Square was Grimmauld Place, and Australia House in London became the interior of Gringotts Wizarding Bank. But what about the locations that Harry and the other characters visited throughout the eight movies that weren't fictional?
There are plenty of real world locations that feature in the movies, including some of London's landmarks, as well as other natural and manmade locations around the country. These are all of the places that we see in the movies, which are not taking on the role of a fictional location. 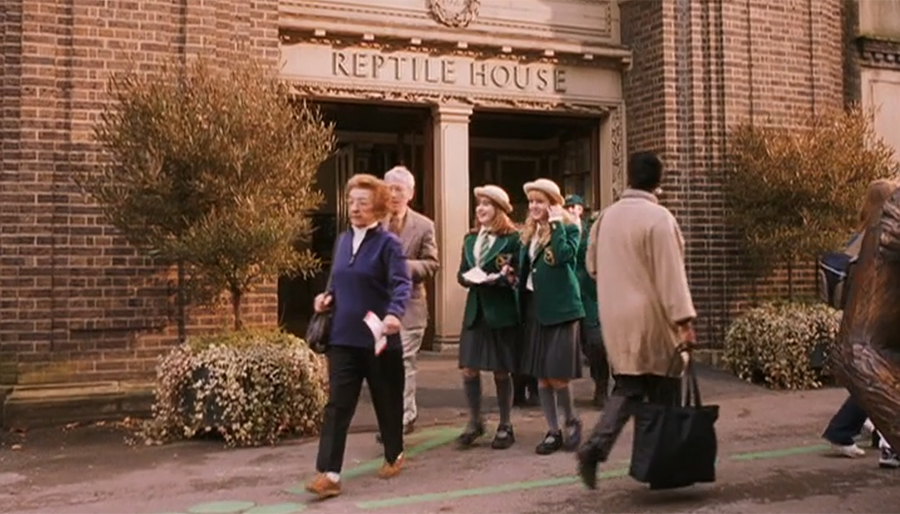 Of course, Privet Drive isn't a real location. So the first real world place we see in the movie series is London Zoo. Harry goes there on a day trip with the Dursleys in the first movie, 'The Philosopher's Stone'. It's here that Harry first starts to realise he's different to kids after an encounter with a Burmese python in the zoo's reptile house. 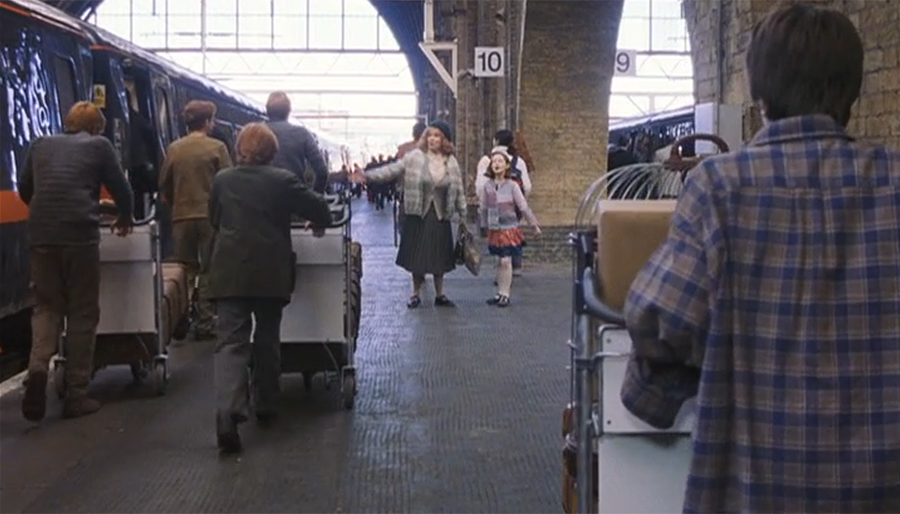 London's mainline rail station, King's Cross, features in several of the Harry Potter movies, including the first movie. The station is where young witches and wizards push through the crowds of muggles to make their way to the legendary platform 9 3/4, where they catch the Hogwarts Express at the start of each term. 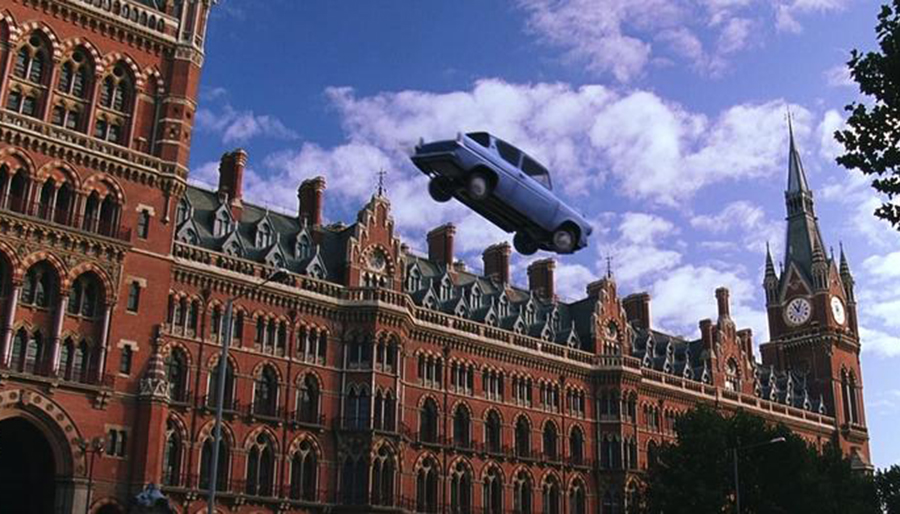 In the second movie, 'The Chamber of Secrets', Harry and Ron miss the Hogwarts Express and are instead forced to drive the Weasley's enchanted Ford Anglia to school. Although the train departs from King's Cross Station, St. Pancras is just across the road, and its from here that the boys take to the skies in the blue flying car.
They then fly the car over Glenfinnan Viaduct, the viaduct is in Scotland and therefore would be further North than Hogwarts and not on route. This makes the viaduct we see in the movie portrayed by Glenfinnan a fictional location, rather than a real world one. 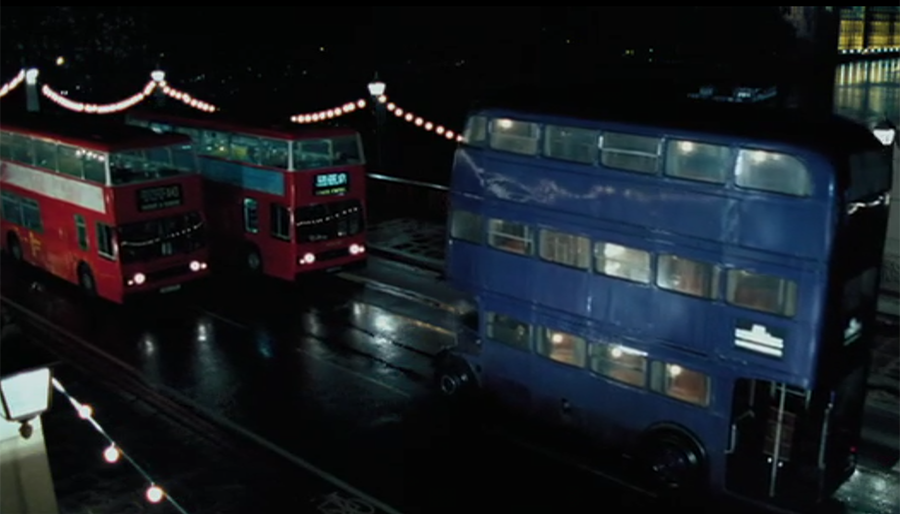 Near the beginning of 'The Prisoner of Azkaban', Harry is rescued by the Knight Bus, a triple-decker purple Routemaster, which is invisible to muggles. As it speeds from Privet Drive in Surrey to The Leaky Cauldron in London, it crosses over the River Thames via Lambeth Bridge. It's on this stretch of road, with the Houses of Parliament in the background, that the Knight Bus squeezes between two regular London buses. 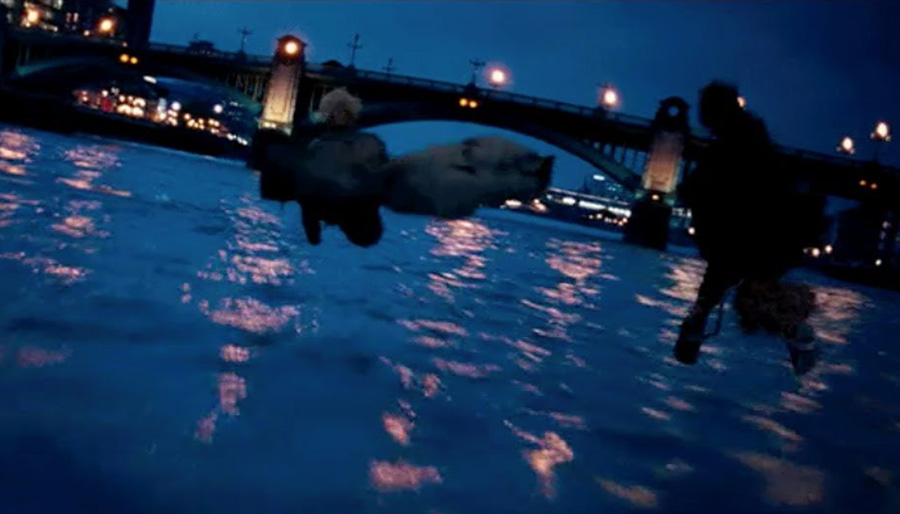 In 'The Order Of The Phoenix' Harry and his friends fly along the river on their broomsticks, passing by the towers of Canary Wharf, Southwark Bridge, HMS Belfast, London Bridge, and the Houses of Parliament, narrowly avoiding a cruise ship as they fly in the darkness. 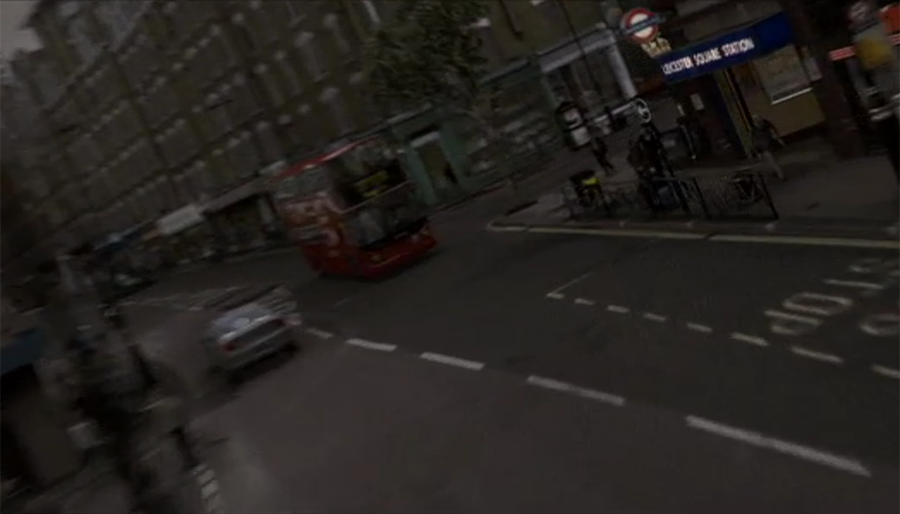 'The Half-Blood Prince' opens with a scene which shows Voldemort's Death Eaters descending from the sky above London as plumes of black smoke. They approach street-level in the capital near Trafalgar Square, before passing along Charring Cross Road. Just past Leicester Square underground station in the heart of London's West End, they cross the road and dart into a small alley way between two buildings on the corner of Great Newport Street, opposite the Porcupine pub.
This alleyway leads to the Leaky Cauldron, because the wizards' pub itself is fictional and the exterior shots are filmed two miles away in Leaden Hall Market, the Leaky Cauldron doesn't make it on to this list as a real world location. 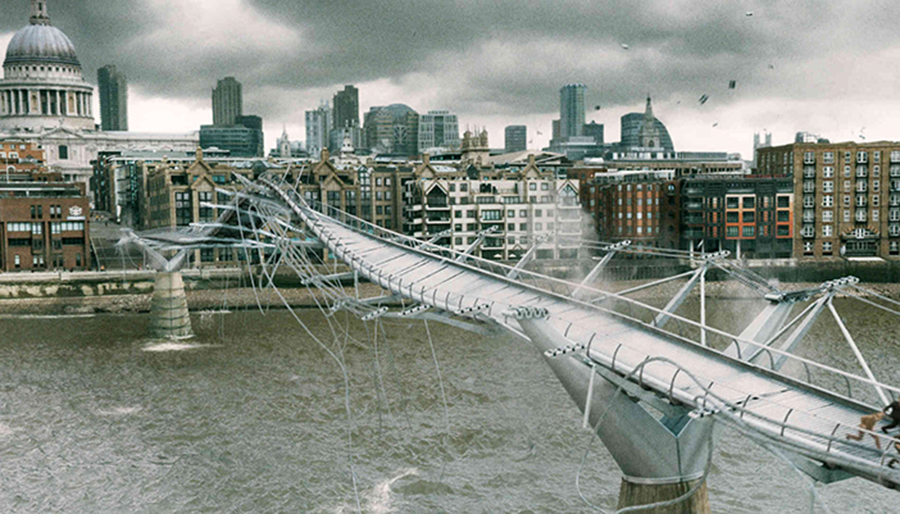 After rushing through the Leaky Cauldron the Death Eaters attack Diagon Alley before flying on past London City Hall and on to the Millennium Bridge. The bridge is seen to be destroyed by Fenrir Greyback and a small group of Death Eaters. In the book it was the fictional Brockdale Bridge that was destroyed. However in the movie adaptation the Millennium Bridge was not used to portray the Brockdale Bridge, but rather as itself. You can hear the words "Millennium Bridge" coming from the radio at the beginning of the movie. 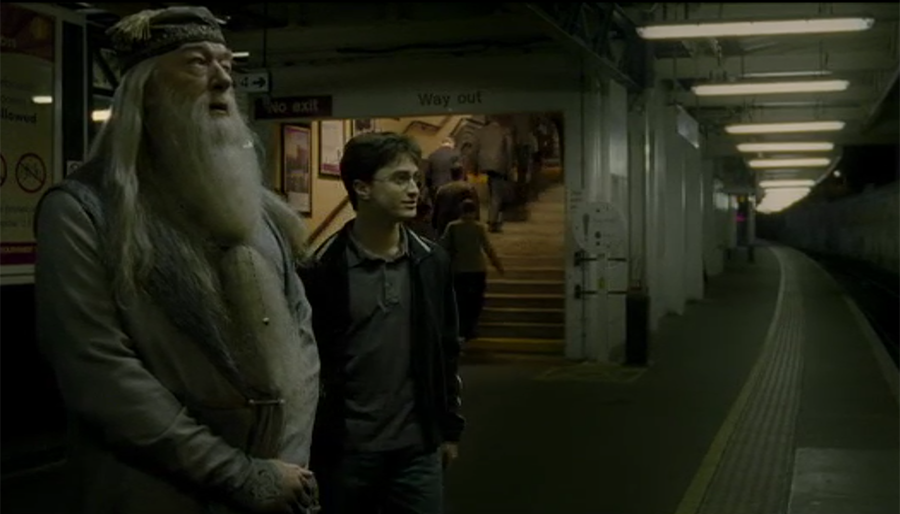 It's revealed in the books that Harry likes riding around on trains, this leads him to Surbiton Station in 'The Half-Blood Prince'. In the movie adaptation the scene is filmed in the real Surbiton Station. We see Harry sat reading the Daily Prophet, which features the story of the destruction of Millennium Bridge. Professor Dumbledore appears here to take Harry back to the Wizarding world.
Another train station that features in the Harry Potter series is Goathland Station, it takes on the role of the fictional Hogsmeade Station, so its therefore not a real life location. 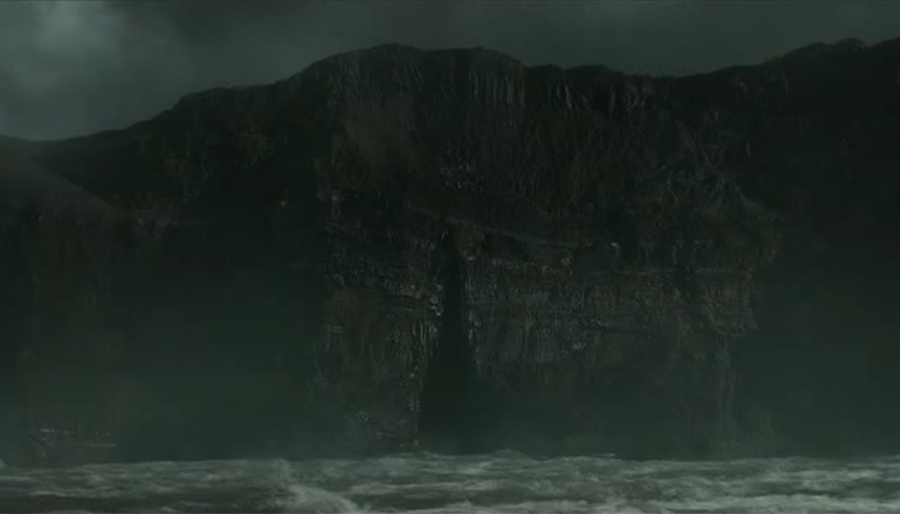 Later in 'The Half-Blood Prince' Harry and Dumbledore go in search of one of Voldemort's horcruxes in an unnamed cave by the sea. The filming location of the cave is at the Cliffs of Moher in Ireland, so although not specifically named, this could be the real world location that the duo visited. 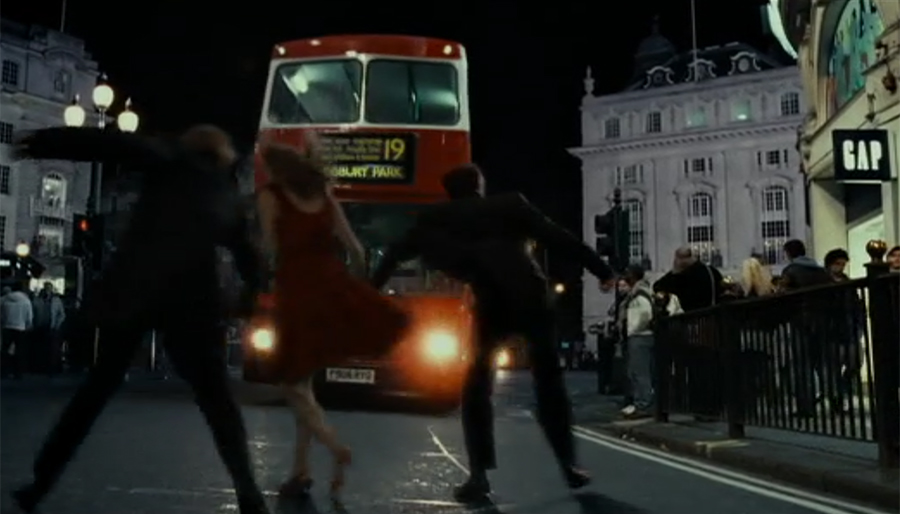 Harry, Ron and Hermione apparate right in the middle of the bustling tourist spot in central London after the attack on the wedding in 'The Deathly Hallows – Part 1', narrowly missing a bus as they appear. They then leave the bright lights of Piccadilly Circus and head along Shaftsbury Avenue towards a fictional all-night Italian caffe on Tottenham Court Road. The trio are later seen walking alongside the Trocadero. 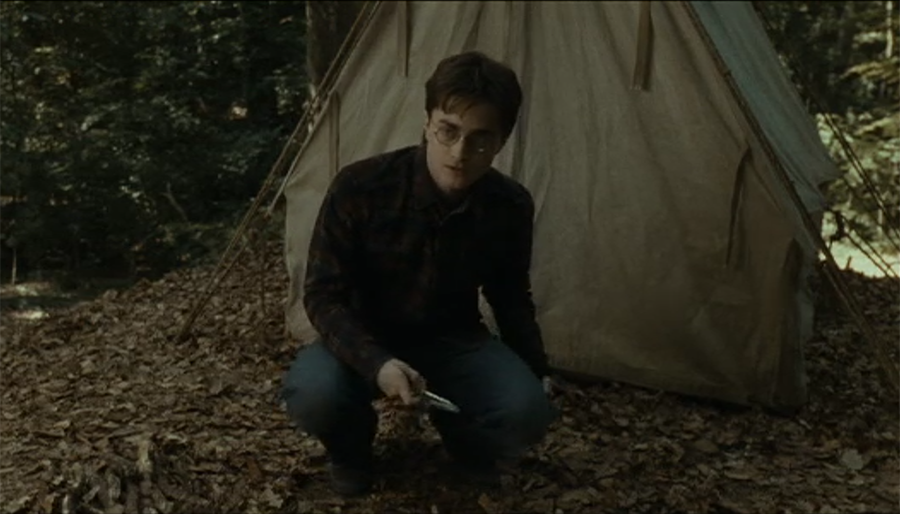 After Harry, Ron and Hermione's daring mission to infiltrate the Ministry of Magic and steal Voldemort's locket in 'The Deathly Hallows', they set up camp hidden behind protection enchantments at the Forest Of Dean in Gloucestershire. 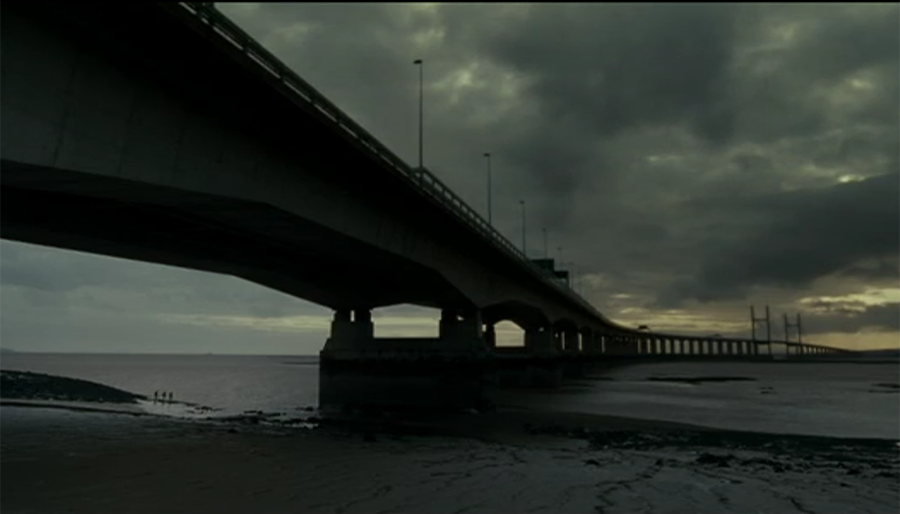 In 'The Deathly Hallows – Part 1', while in hiding, Harry, Ron and Hermione are seen walking under a large road bridge. Many websites have incorrectly identified this bridge as the Severn Bridge, it's not. It is actually the Second Severn Crossing. The bridge opened in 1996, thirty years after the first Severn Bridge opened and is located less than three miles along the coast from it. The bridge links England to South Wales, and the trio can be seen walking under its English end in the movie. 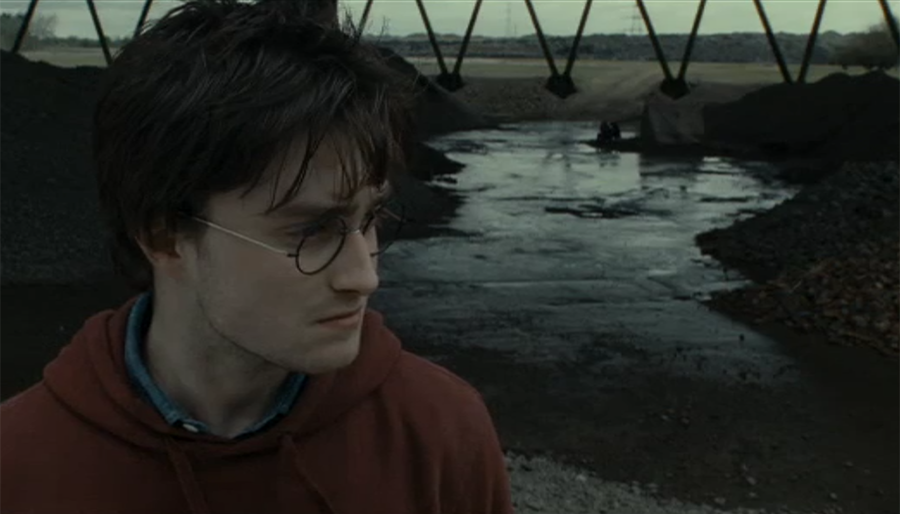 The old cooling towers of a former power station in Nottinghamshire is the backdrop of another of Harry, Ron and Hermione's camp locations. They set up their enchanted tent amongst the rubble and dirt that remains on the site of the now demolished coal-fired power station. 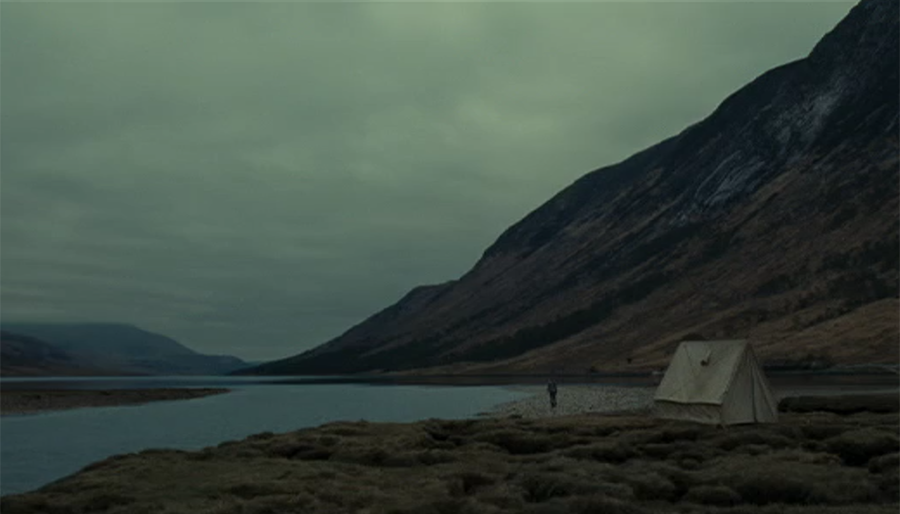 The loch is another location where Harry and friends set up camp while hunting horcruxes. The scene was filmed at the northernmost part of the lake, which is 30km long and located in Argyll, Scotland. It's at this location that Ron leaves the party, he later regrets his actions and returns at the next location on the list. 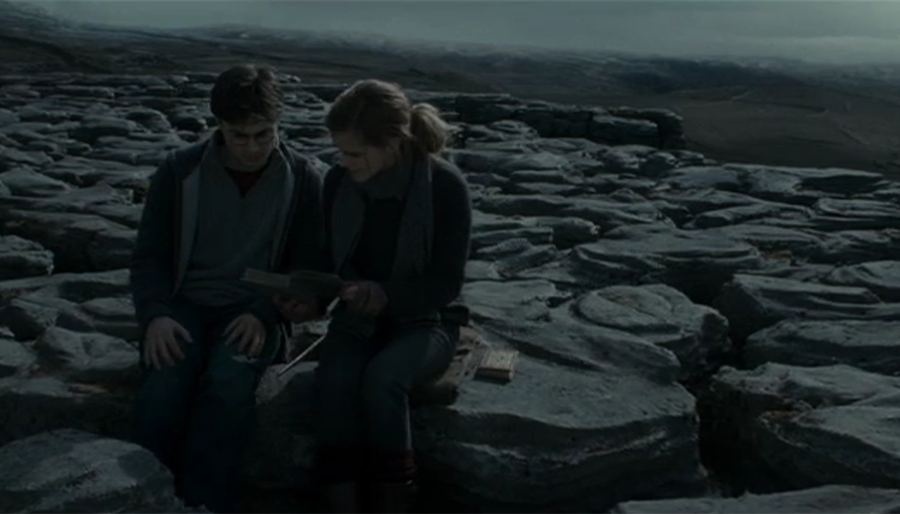 The final location we see the trio camping at is a rocky ledge in the wilderness. This is Malham Cove, a limestone formation near the village of Malham in the Yorkshire Dales. The top of the cove consists of a uniquely shaped rock formation which was made by the river that once ran over it. 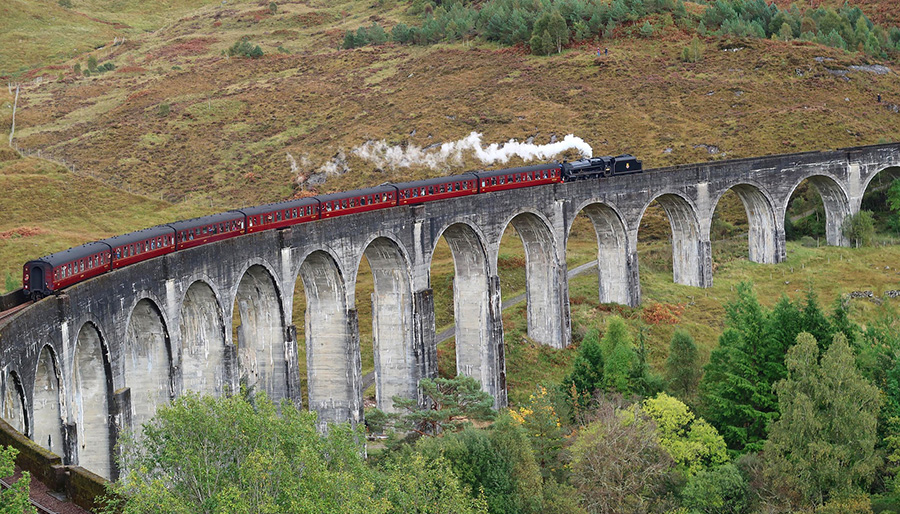 Photo: pixabay.com
This stunning viaduct is located in the Highlands of Scotland and is seen during the iconic shots of the Hogwart's Express on it journey from King's Cross to the magical village of Hogsmeade.
Tags:
moviesharry potter