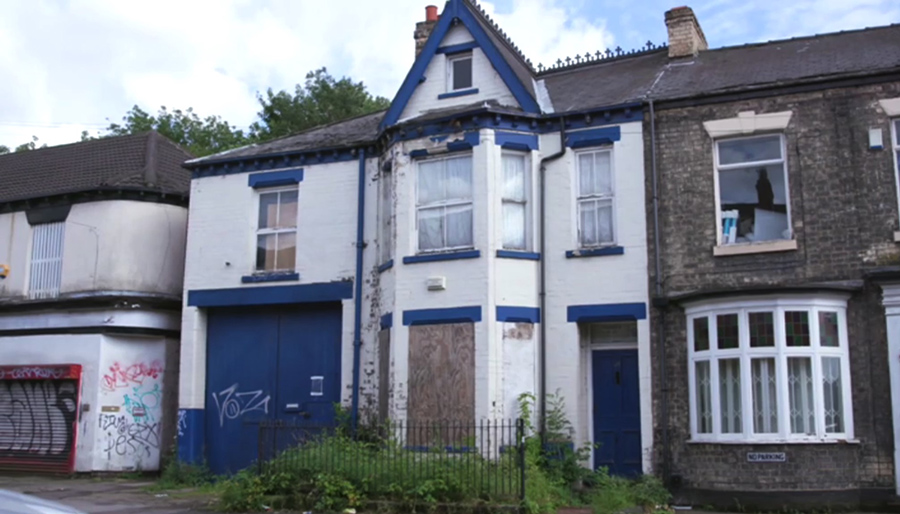 In the third episode of REALLY's brand new paranormal show, 'Help! My House Is Haunted', a team of three paranormal investigators aim to use the latest technology to try to capture never before seen proof of the paranormal that's haunting the homes of average families.
So far they've investigated a haunted castle and a pub, this week Chris Fleming, Sandy Lakdar and Barri Ghai have traveled to investigate the famous 39 De Grey Street in Hull. The building is a former family home and one which now lies empty.
A home that's fallen victim to poltergeist activity, occupied by tormented child spirits. The property's owner Andy Yates, who moved out of the house ten years ago, said, "before I moved into this house, I was the biggest skeptic you could find," but he says that the things he's seen at the now derelict house are "completely impossible to debunk."
Paranormal activity is said to include objects like knives moving around of their own accord and a full apparition of a girl. The ghosts of three children have been seen, but the house is said to have between 15 and 20 child spirits. There's even been reports of violent attacks in the form of scratching and even a scarf around someone's neck being tightened. 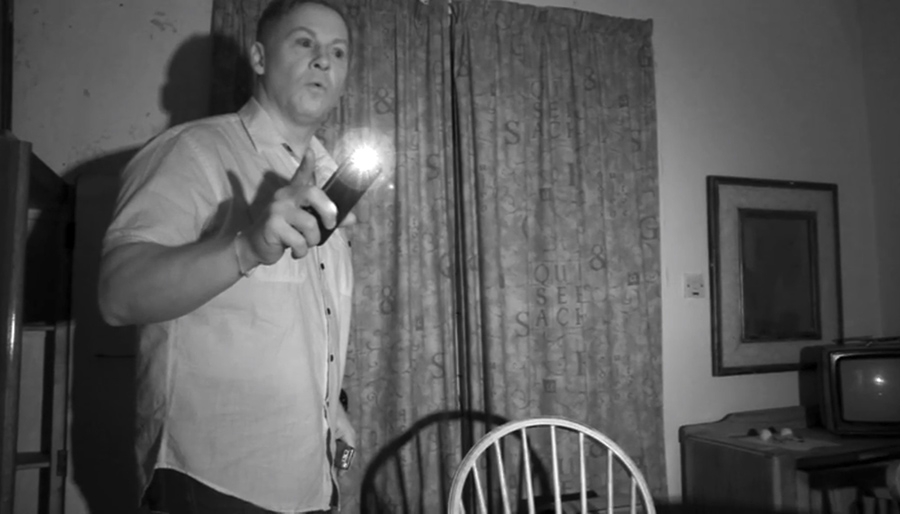 As usual, the show's psychic, Chris, hasn't been told anything about the location and he is the first to enter, alone. Speaking into is audio recorder, he said "right now I'm standing outside, it looks like the outside is abandoned, there's boards on here. It does not look good."
While conducting his initial walk around, he concluded that there was something in the house that was driving people out. He also heard the sound of a child, despite the house being empty. Later in his walk through he came across a terrifying room full of creepy dolls. Barri says that "dolls and things with faces act as vessel and conduits for demons and negative entities."
Meanwhile, Sandy and Barri scoped out the outside of the building and its surroundings, before heading off to a history centre to try to find out more about the house. They discover that the first mention of the house in the town's records is in 1895.
Although the building has had multiple owners, who don't seem to stay long, Barri couldn't uncover any evidence of suicides, murders or deaths, in fact no reason why it should be haunted. However, Andy says that the house was a former home for foster children.
But, as well as the child spirits, Andy says there is one aggressive and violent spirit of an adult male, said to be a dark and dangerous entity. 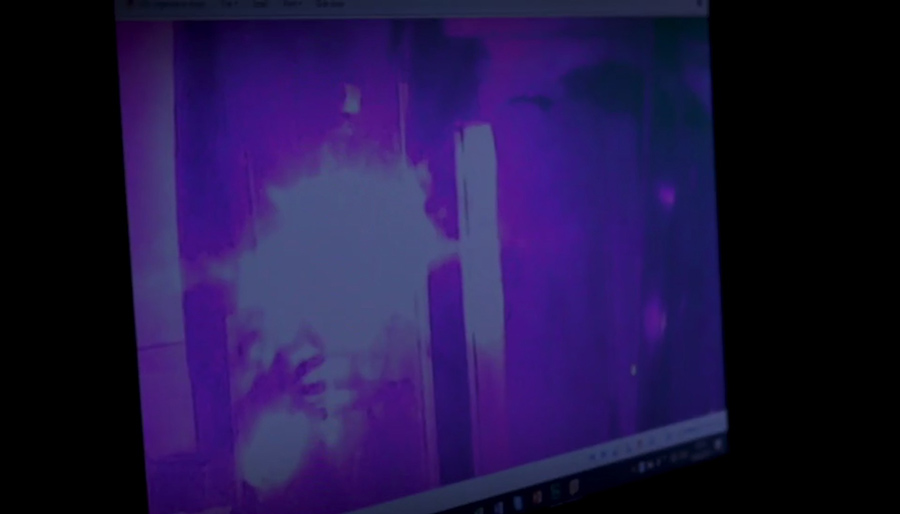 As darkness fell outside, the team locked themselves into the house in order to perform their night long investigation. Sandy says that she'd like to go in to the house alone, this became a subject of debate and Barri seemed to become emotional. His apprehension was due to something he discovered earlier in the house.
During his initial sweep of the house with a full spectrum camera, Barri captured what he said was a portal. It's believed that mirrors can be a portal to the spirit realm. In the photo a bright light can be seen emanating from the mirror and there's even hands that seem to be coming out of the light.
On the other hand, it could just be someone's hand print on a dusty mirror that has become visible due to the light from the camera's infrared source. It would have been nice to see the team try to recreate this photo. If the hands had moved or the portal had vanished all together then this would be considered good proof of the paranormal.
Chris describes the photo as "unbelievable" and says that this portal is "essentially an open door for spirit attacks."
Despite this risk, Sandy started her lone vigil in the house, saying "I'm not going to lie, I'm kind of scared." Unlike in previous episodes, Sandy wasn't accompanied by a camera operator in the house, she was completely alone and clearly terrified.
Although she was scared, it seemed to be a little unwarranted it, as nothing happened to her while she was alone in the property, but the guys monitoring Sandy's progress from the car outside said they heard footsteps running across the room. The sound wasn't really audible as footstep in the playback. A few minutes later, Chris and Barri rejoined an emotional Sandy in the house.
Later in the investigation, Chris was in the room with the creepy dolls where he said he could feel five child spirits touching his hand. Chris says some of the spirits are evil and are in the dark because they are ashamed of what they have done, but others are hiding in the dark because they are scared.
Now with the support of a cameraman, Sandy resumed her investigation upstairs, straight away she heard footsteps coming from one of the corridors, sadly this wasn't picked up on camera. At one point she called out to the spirits asking them to move a trigger object they'd placed on a table in one of the rooms, "can you move this ball, it is one of the things I would like you to do." At that very moment, something did move but not the ball or any of the objects placed on the table, one of the crew's lighting cables visibly moved in the background of the shot. 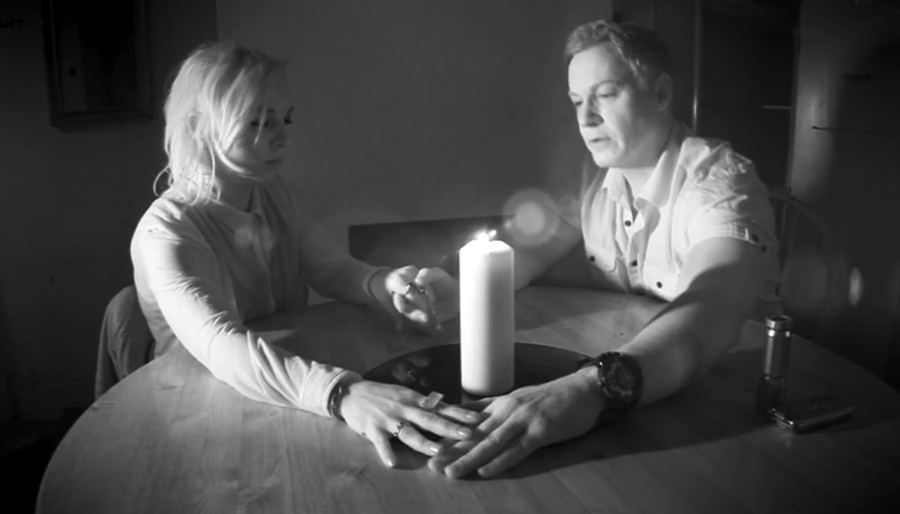 Later the team returned to this same room, where Barri used a device called an SLS camera, which he says "maps anomalies invisible to the human eye by measuring changes in the thermal temperature and light frequency." Basically, it's designed to try to see human forms in abstract noise and when it does, the software will draw the figure as a stick man over the image.
While moving the camera around the room, the software picked up what could be a human figure in the darkness. Barri said that the figure was pointing towards the fireplace, a place in the house where the owner had seen an apparition emerge from and where moments before, camera man Matt had felt something tugging on his t-shirt.
If the SLS camera can be believed the spirit danced around the room, from the floor to on top of a wardrobe and even changed in size from that of a child to an adult-size figure.
Soon after this the investigation came to an end and Chris and Sandy performed a prayer ritual to help the spirit of the house cross over.
The episode was interesting, especially as many in the paranormal field believe that the house's haunted reputation has been totally fabricated by its owner. A fact that Barri did allude to in the episode when he said he too had found no reason in the building's history which suggests it is haunted or has a dark history.
You can watch 'Help! My House Is Haunted' on the REALLY channel, which broadcasts in the United Kingdom and Ireland as part of the UKTV family of channels. You can watch REALLY on Freeview (17), Sky (142), Virgin Media (129) and Freesat (160), plus YouView, BT TV and TalkTalk TV.
Tags:
paranormalhelp my house is hauntedtelevisiontopicaleast yorkshire