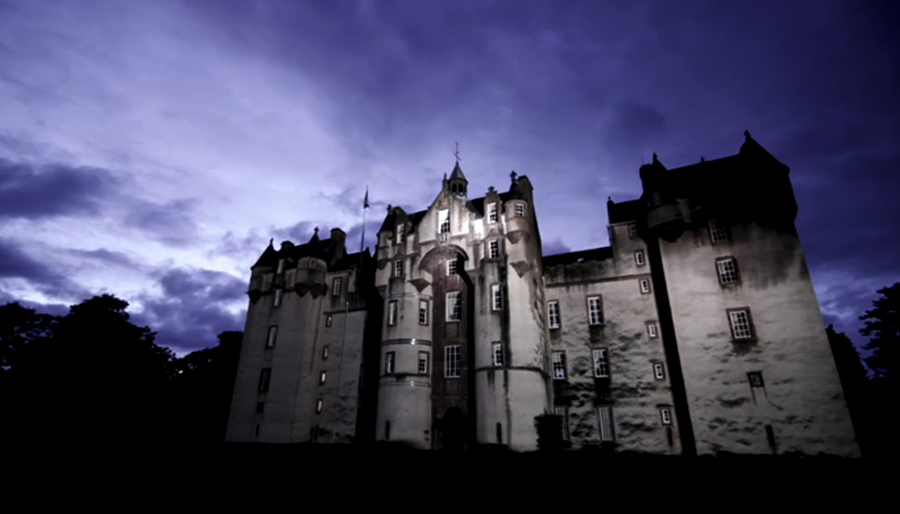 In episode eight of REALLY's newest paranormal show, the three fearless ghost hunters head to Scotland where they encounter the soul of a restless woman in a building where skeletal remains have been found.
Throughout the series, Sandy Lakdar, Barri Ghai and Chris Fleming have been travelling the length and breadth of the UK and using the latest ghost hunting gadgets to try to capture evidence of hauntings. This week's location is the mighty Fyvie Castle in Aberdeenshire.
The 13th century castle is said to be plagued by an evil curse, as well as plenty of paranormal activity. The first reported ghost sighting in the castle was in 1601 and was said to be Dame Lilias Drummond, the Green Lady.
The castle's legendary curse dates back to a visit by the famous Scottish prophet, Thomas the Rhymer. He was approaching the castle on a dark and stormy night. As he got near, the castle door slammed closed in his face due to the wind. As a result of this he refused to enter the building and cursed it by placing three weeping stones within the grounds. He said until the three weeping stones were found, no eldest son would earn the right as the heir of the castle.
Two of the stones were never found, however one weeping stone that was found is kept in the Charter room in the castle. All that is left of the stone today is its crumbled remains, nothing more than a pile of dust.
Although the two remaining stones have evaded detection for centuries, Sandy went in search of them in the castle grounds. After a short time paddling through a river that runs through the grounds she found the two stones. She seemed convinced that these are the weeping stones, but it's pretty unlikely that the stones would have been sat on the riverbank for over 400 years next to a river that would be constantly changing, moving and eating into the land around it. Plus, these stones were large and intact, nothing like the crumbled remains on display in the castle.
Sandy said, "this is very dangerous what I'm doing right now." She added, "so what I'm going to do is find a spot to hide the stone, and tonight I will come back." 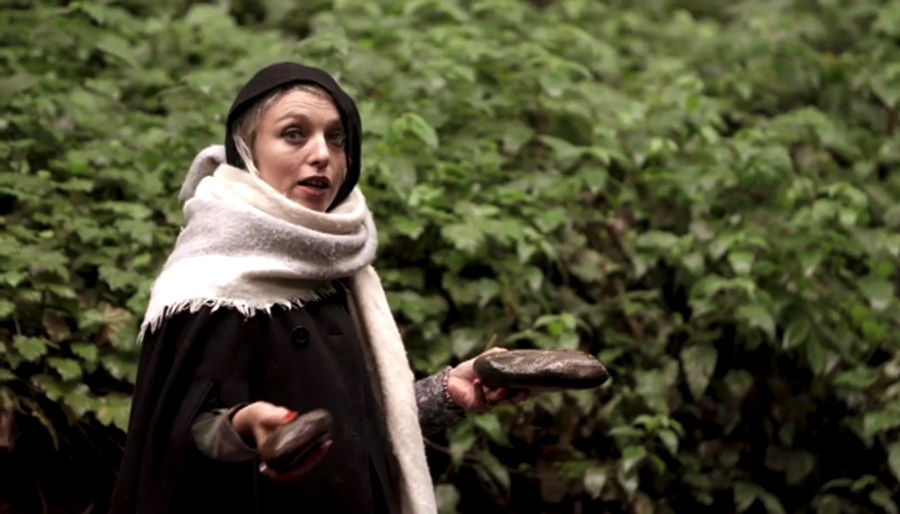 Chris, the show's psychic, never knows anything about the destination the team are about to investigate, but in the car on the way to the castle he picked up on the vision of a knight in grey armour. He was pretty amazed when the car turned the corner and he saw the beautiful fairytale castle.
While Sandy and Barri went inside for an initial walk around, Chris sat outside gathering his thoughts and getting to grips with a feeling of the spirit of an unhappy woman. Eventually he went inside alone to see if he could learn more and was overwhelmed with the stunning interior of the castle. He said, "this is a paranormal investigator's dream." In one of the hallways, Chris found what he said was the exact suit of armour he'd been thinking of. Excitedly he said, "I said it was black or dark grey." But aren't all suits of armour grey?
Then Chris' walk through was interrupted when a call sound played loudly through his walkie-talkie. Of course, this could have been another member of the team just leaning or accidentally pressing the button, but Chris checked this by radioing through and a team member said "uh, something did happen but it wasn't me". Chris said it must have been some type of interference, but it wasn't radio interference, it was the 'call' button being held down by someone or something.
Meanwhile, the castle's owner, Robert Lovie, took the show's tech expert Barri up to a bedroom known as "the murder room," sounds nice. It was once the bedroom of Dame Lilias and the site of her death. At the age of just 30-years-old, after birthing five daughters she mysteriously disappeared. The consequences of failing to produce an heir in 16th century Scotland was brutal. Did she fall victim to the Fyvie curse?
It's thought that she was dragged up the stairs and killed in her room. Hence the grim name of the room, where part of the floor is stained with blood and no matter how hard the owners have tried, it cannot be washed away. Apparently the stain has been tested and it has been confirmed to be blood.
After Barri has left, Chris stumbles across the murder room, walking in he said, "I don't like this room." He picked up on the fact that it used to be a tiny bedroom, even though there is no bed in the room anymore and it didn't look particularly like the type of room that would be used as a bedroom in a grand castle. He got the feeling that something significant was going to happen in this room later in the night.
By this point, Sandy was exploring the castle too, she was in the Meldrum tower, which is named after the family who owned the castle in the 13th century. Lady Meldrum requested her remains to be buried within Fyvie's walls when she died. It's said that during some renovation work in the 1920s, a female skeleton was found behind a wall in the tower. 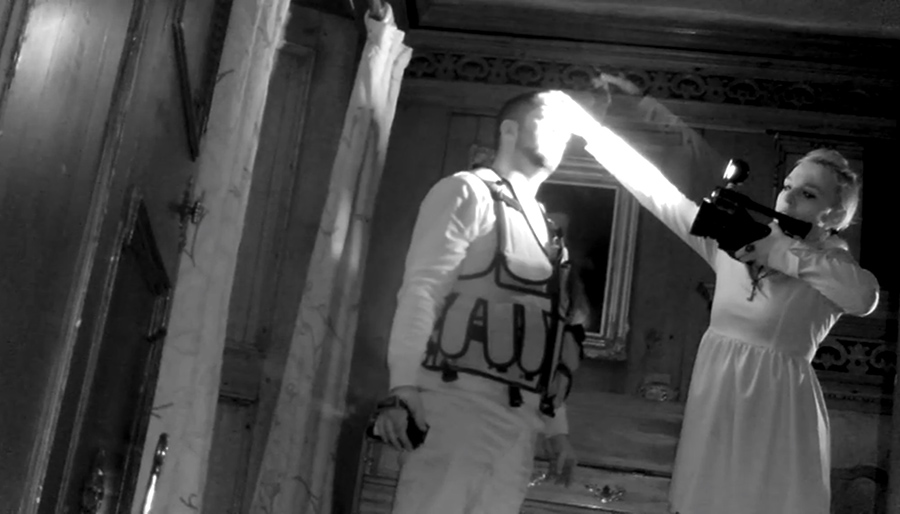 Once darkness had fallen outside, the team rigged the castle with their night vision cameras, locked the castle down and prepared to begin their investigation. Chris warns that it's a full moon. He says that when the moon is shining at night, it emits a certain frequency of energy that allows us to see ghosts and spirits. Of course, the Moon is simply just reflecting the light from the Sun, but according to Chris it must differ some way after bouncing off of the lunar surface.
Perhaps Chris is right, because before they even set out into the darkened castle, they heard an unexplained moan. Eventually they headed off to some of the most active parts of the castle to begin the night long investigation, Barri wearing his trademark commando ghost hunting vest.
Sandy was posted in the dressing room with a REM-Pod, a device that can detect changes in static electricity around it. It's said that spirits can manipulate the field around the device in order to trigger it and communicate. As Sandy wanders around talking to the spirit of Lady Meldrum, the REM-Pod suddenly flashed and beeped, seemingly without any physical interaction. Sandy says, "I believe we are now in contact with Lady Meldrum."
Sandy carried on chatting away to the spirit, but the REM-Pod didn't trigger again or directly respond to any of her questions. Barri says, "the success of the REM-Pod has given me an idea." His idea was to use his SLS camera in this area, a device that can map and record anomalies that appear outside of the visible spectrum.
Barri calls out to the spirits, asking Lady Meldrum to show herself. Chris says, "the moment Barri makes this request, I sense a shift in the atmosphere, what happens next leaves us stunned." The stunning happening was what Barri described as "something standing on a window sill."
The figure was visible in the form of a glitching, shaking stickman on the screen of Barri's specialist camera. By the looks of it, it was about three feet tall and was dancing, but as quickly as it appears it vanishes, which coincides with Barri moving the angle of the camera. Does this mean the figure was just the camera's software finding patterns in abstract darkness?
While Barri was using his camera, Chris was using an audio recorder to capture sounds from the room. He played back his recording and heard what he described as an unmistakable human voice, which he thought was saying "take me back." He thinks this could be the spirit of Lady Meldrum, as she had wanted her remains to stay in the castle, but when her skeleton was discovered in the 1920s, she was taken away and buried in a local cemetery.
Sandy then went outside to return to her weeping stones she'd found earlier. She said in her lovely French accent, "what I want to do is take the stones back, do a prayer on it, and talk to them, ask to my angel and throw them back in the water." After performing her ritual, she rejoined the team back in the castle.
Barri was already in the the murder room, where Chris was getting excited by several orbs that were floating around his body. Barri called out to the spirit, "Lilias, you were trapped in this room. You were imprisoned. You were tortured, murdered. Do you have a message for us?" A few minutes later, with his arms wide, he said, "I give you full permission, use my energy."
Sandy said, "none of us could imagine what would happen next..."

Seconds later we find out. Barri seems to have gone in to a trance-like state while stood upright in the middle of the room. Sandy approached him, "Barri, come back to me." She tries to snap him out of it, and after a few seconds he comes around and falls to the floor. Sandy fills us in, "Barri has just been possessed by the tortured spirit of Dame Lilias." Meanwhile, Chris' camera battery had gone dead, so everyone was having a bad time.
Chris then digs out a spirit box, a device that allows communication from the other side using white noise. He attempts to contact the spirit of Lord Seton, the husband of Dame Lilias and the person who is said to be responsible for her death. He called out over the white noise, "Lord Seton, are you imprisoned here because of what you did?" A very clear voice came through, which said "yes". But sadly, Chris didn't manage to get any other direct responses to his questions. Despite this, Chris says, "this is all I need, we can now get some closure."
Closure comes in the normal 'Help! My House Is Haunted' way with a cleansing ritual around the castle, which involves prayers and burning incense.
You can watch 'Help! My House Is Haunted' on the REALLY channel, which broadcasts in the United Kingdom and Ireland as part of the UKTV family of channels. You can watch REALLY on Freeview (17), Sky (142), Virgin Media (129) and Freesat (160), plus YouView, BT TV and TalkTalk TV.
Add A Comment
Tags:
paranormalhelp my house is hauntedtelevisiontopicalscotland