Help! My House Is Haunted: The Dolphin - Series 1, Episode 9 Review 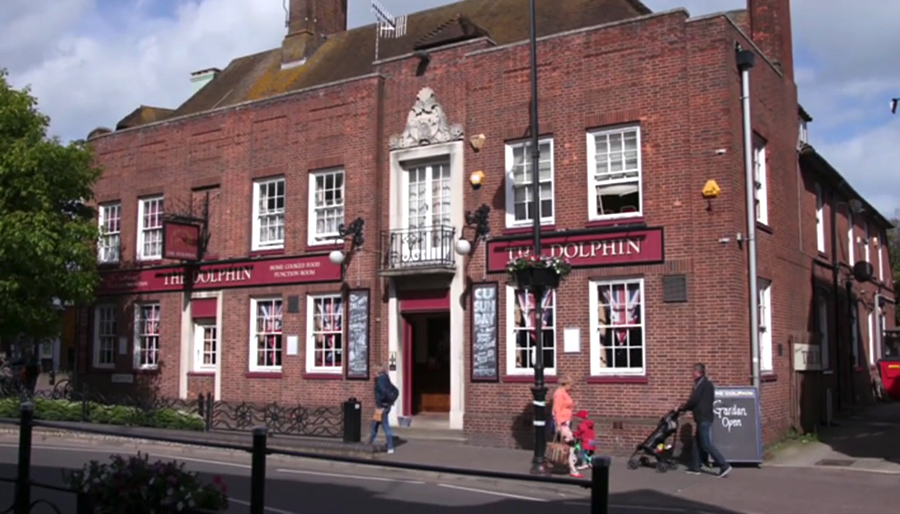 In the ninth episode of REALLY's newest ghost hunting show, the team head to West Sussex where they lock down an 18th century pub with a sinister history.
Throughout the series, Sandy, Barri and Chris have been travelling the length and breadth of the UK and using the latest ghost hunting gadgets to try to capture evidence of haunting. This week's location is The Dolphin in the costal town of Littlehampton.
A terrified pub owner, haunted by a vengeful spirit has called Sandy Lakdar, Barri Ghai and Chris Fleming to investigate the strange goings on. The Dolphin is situated in the small seaside town on the West Sussex coast. The pub's current owner, Ellie Boiling, fell in love with the building after working there as a part-time chef in 1989, when the lease became available she snapped it up.
Ellie has reported a whole array of paranormal activity, including loud unexplained bangs and disembodied laughter. One of her guests staying in room two once asked to be moved late at night after witnessing someone walk through his closed door. Ellie moved the terrified guests up to room six, but in the morning found they had fled in the night.
There's also the ghost of a little girl who's been nicknamed Dolly, who's said to take a liking to ladies with red hair, but there's one other spirit she's afraid off, who is believed to be called William. 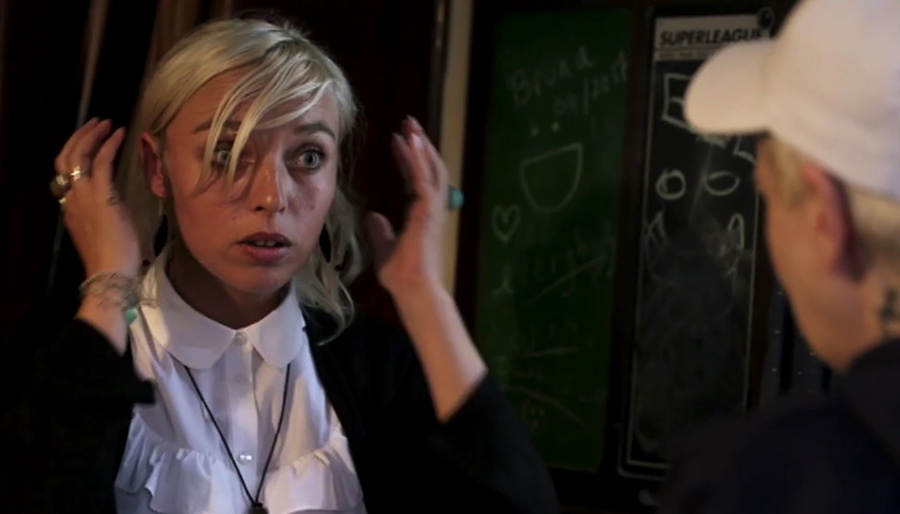 As always, the show's psychic, Chris didn't know anything about the property prior to his arrival. The three paranormal investigators entered the pub. Sandy met the owner in the bar for a chat about some of the odd happenings here, but during the conversation she had a strange experience of her own. Sandy experienced a sudden odd sensation like she was losing her hearing. She described it as feeling like she was wearing headphones.
Ellie then showed Sandy some CCTV footage, which she claimed showed an imp moving in the pub. The strange smokey shape moved past an unaware customer in the bar. Ellie said, "I need someone from your crew to speak to him, he doesn't listen to me. He wants my job basically, he wants to be in control of The Dolphin."
Meanwhile, Chris went straight down to explore the eerie cellar on his own, where he picked up on an unknown presence. Chris then picked up on a former spirit of the pub in the bar area, his psychic powers told him that this guy used to drink a lot. On the top floor, Chris picked up on a dark entity, he felt like the presence was hiding somewhere in the dark.
Sat in a creepy room with dolls, which has clearly been laid out for ghost hunters, Chris took out his audio recorder in an attempt to catch spirit voices. He spoke to the spirits, asking them if there was a negative spirit in the building. When he played back the recording he said he could hear the words, "negative ghost."
While all this was going on, Barri was at a local graveyard with historian, Mark Green. The two were stood in front of the grave of a young girl called Aida Parish, who once lived in the pub as a child. It's said that during a diphtheria the children were put down in the cellar when they were ill to keep them cool, but Aida refused to go down to the creepy cellar and instead stayed in the nursery where she died. The grave had the nickname "Dolly" etched into the stone. 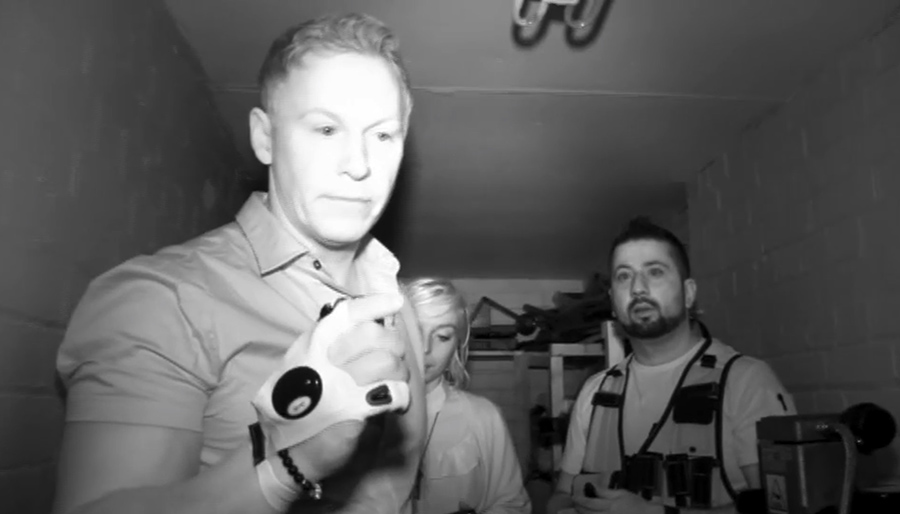 With the light fading outside, the team have from dusk until dawn to get to the bottom of the pub's hauntings, while locked down inside the building. As the team prepare for their investigation, they place static cameras around the building. While crew member Andy was installing a camera in room seven, a light behind him started flashing.
The team start their investigation in the cellar, now with the lights turned off and filming with night vision cameras. Barri said he felt something like cobwebs on his face after walking through a doorway. Chris said it couldn't be, "there aren't any cobwebs here," he added "you're feeling the residual static of the spirit that's effecting you some how."
Other than the cobweb incident, we weren't shown what the team did in the cellar, and before long they were headed back upstairs to the bar. Here they used a spirit box, a device that scans through radio frequencies and is said to give ghosts the chance to speak through the white noise.
Chris started to call out, "spirits that occupy this bar, come forward now. Say hello." They heard a few fleeting snatches of radio noise, the first of which they thought said "hello." By this point the team were beginning to think that the reason the pub is so active is because there are many Ouija boards in the building. This was confirmed when Chris asked "why is it a problem?" and the spirit box answered with the word "imp", something that Chris described as "disturbing."
The team then heard the words "upset" and the spirit gave its name as "William". Sandy then asked "why are you mean to Ellie?" And the team heard the response "I'm sorry." This lead them to the conclusion that William has been trying to warn Ellie about something. Barri said, "this is unsettling news, but real progress. The spirit of William isn't a threat to Ellie, he's actually sorry and has been trying to warn her of a much darker presence."
By this point the team had heard the word "imps" on the spirit box three times. Chris wondered if this was a sign that the Ouija boards used in the pub have acted as a gateway allowing the demonic imps into the building.
The team split up, Sandy and Chris went to room seven, the most haunted room in the pub. Chris immediately spotted the attic hatch, noting that entities, dark spirits and imps hide in dark spaces like that. Chris then pulled out his trusty audio recorder again and asked the demons of the pub "who or what brought you here?" They heard a quite clear reply that seemed to say "ouija."
Meanwhile, Barri was down in the cellar using his SLS camera. He said he could see two energies, which were made visible as stickmen on his camera's screen. Moment later one of the figures seemed to point towards a cupboard and a creepy doll that was inside, Barri wondered if the doll might have a demonic attachment. Chris, who had joined him in the cellar said, "let's find out," but we didn't hear any more about the doll in the episode.
The team then headed back to where the presence is strongest, to close the portal and banished the demons, this happened to be room seven. Chris and Sandy conducted a ritual here stood around a spirit box. Chris got a bit religious and read some text from his phone to help move the demons on. He then sprinkled what was presumably holy water around the room.
Once the sun had risen and the investigation had come to an end, Sandy said "the Dolphin has been a dramatic and demanding investigation."
The episode ended with the team telling the owner, who was already upset, that her pub isn't just haunted by ghosts and spirits, but demons. In fact Chris said even the ghost of "Dolly" is in fact a demonic imp that is pretending to be Dolly.

Is The Dolphin Haunted?

Sat prominently on the high street, the Dolphin Hotel is one of the oldest pubs in the town and with a history that includes tales of murder and the pub being used as a safe haven for smugglers, it's not surprising that it has such a haunted reputation.
The paranormal activity includes the disruption of electrical equipment, sudden and extreme temperature drops, unexplained sounds, footsteps and dark shadows. The pub's landlady has even caught what she believes to be an apparition of a ghost on CCTV camera.
The pub has two very famous ghosts, Oliver Reed is said to have once stayed at the hotel and never left. The pub was also once visited by the famous poet, Lord Byron, and some think he may still haunt the building. The pub's most frequently sighted spooked is that of a young woman called Jane who has been spotted in the women's toilets. She was allegedly murdered by her uncle and he too is said to haunt the pub, many women have reported feeling his presence stood behind them.
Some of the most active parts of The Dolphin are the eerie cellars, room two where a woman in white floats through the door, and room seven, which is said to be haunted by ghostly women and children from the Victorian era. They have been seen and heard in the room.
This isn't the first time that the pub has been investigated by stars of the small screen. Derek Acorah, the former psychic medium from the long-running ghost hunting show, 'Most Haunted' once visited the pub and confirmed its spooky reputation. As did fellow psychic Ian Lawman, who has most recently appeared on REALLY's 'Ghost Chasers'.
You can watch 'Help! My House Is Haunted' on the REALLY channel, which broadcasts in the United Kingdom and Ireland as part of the UKTV family of channels. You can watch REALLY on Freeview (17), Sky (142), Virgin Media (129) and Freesat (160), plus YouView, BT TV and TalkTalk TV.
Tags:
paranormalhelp my house is hauntedtelevisiontopicalwest sussex