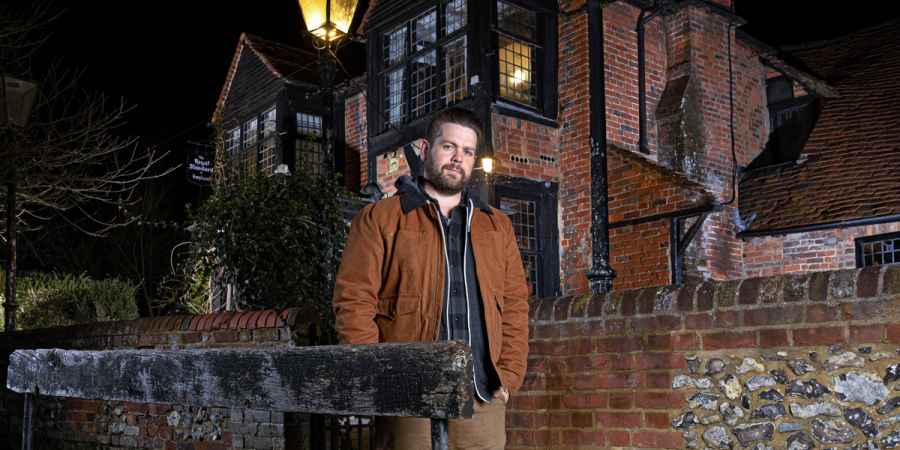 Photo: © Discovery+
Over the last decade Jack Osbourne has conducted close to 100 paranormal investigations all over the US, 'Haunted Homecoming' sees Jack return to his roots at some of the old haunts from his childhood in the UK where he had his first paranormal experiences.
Jack's upbringing was far from ordinary. Not just the son of Ozzy Osbourne, "The Prince of Darkness", but he and the Osbourne family lived in what is thought to be the most haunted county in England.
Jack's fascination with the paranormal stems from the frightening experiences he had in his early years growing up in Buckinghamshire, in one of the oldest homes in the county, Welders House. Jack said he experienced things there that he can't explain. He says in the series, "the experience I had here made enough impact to influence the trajectory of my life."
Jack's come home in an attempt to unearth the secrets behind those frightening memories, while discovering the long, rich history and folklore of the locations along the way.
The journey home follows Jack as he attempts to face up to the demons of his past, but he's not alone on this mission. Jack is joined by Kate Cherrell, a paranormal investigator with a PhD in Spiritualism in Victorian Gothic, which focuses on historical séance methods. Jack confesses that Kate is "a far more qualified researcher than I probably would ever be." Kate's academic background does mean that she adds an air of professionalism to the investigations, starting off with some very confident retelling of her research into the history of the house in the first episode.
The television newcomer said, "I was always the weird ghost girl and I turned it into an academic interest. On the side I've been ghost hunting on-and-off for the past 10 years and I write on ghost-related topics for magazines and publishers, so it's a childhood interest which has become all-consuming."
Jack added, "production company North One contacted me to suggest making a show which focused on Welders and involved an investigation of my family home." Jack explained how the new series is different from 'Portals To Hell', which he also stars in. He said, "'Haunted Homecoming' doesn't have the same format and that's what excites me because this has a totally different feel."
Throughout the intensely personal series, Jack and Kate use various methods of investigation, all of which are caught on night vision camera, including the use of spirit boxes, mirror scrying and Ouija boards. Many paranormal shows shy away from the use of spirit boards due to the negative impression people have of them. But Kate, as a rational investigator, is able to help Jack get over these unjust fears.
Kate tells Jack, "it only seems to be over the last 50 years or so that people have really imbued this fear into the board." But Jack admits, "I'm slightly nervous doing this in my own house though. I don't necessarily want to open something." Of course, the board was perfectly safe and yielded some interesting results for the pair, which Kate was able to verify with historical information.
Jack also called in a medium Ryan Griffiths to conduct a psychic sweep of the house. Ryan recently appeared in the series 'Spooked Scotland'. The information obtained through the Ouija board also seemed to match what Ryan had said about the property.
Across the three episodes Kate joins Jack as he visits his childhood home, the places he knew and visited as a schoolboy, even Jack's local pub. Jack said, "to spend a lot of time around where I grew up and to revisit places where I spent time as a kid has been cool. I brought my fiancée over for a week and my daughter's been with me, so it's been great."
Kate added, "the shoot has been really interesting and Jack has been so good to work with. I enjoyed his shows beforehand, so it's been nice to see up close how he works and how he processes events and evidence. It's been a great experience. This is my first ghost investigation series and I've gone right in at the deep end."
Jack tells us that 'Haunted Homecoming' has a "totally different feel" to other shows he's worked on, promising that it's "fresh and more personal." This is very much the case. The show is on the whole much more balanced and less dramatic than other shows on television, although Jack does still get a little overwhelmed by what he feels is a sinister atmosphere when alone and away from Kate's calming influence. In fact at one point while monitoring Jack's progress on a monitor, Kate says, "the Jack that's on the cameras is not the same Jack that was investigating with me earlier."
Have the ghosts of Jack Osbourne's past been waiting for him all these years? You can find out soon. The three-part series will be available to stream for subscribers of Discovery+ from October 2, and promises to deliver the sort of bone-chilling paranormal experience that Hollywood horror films are made of, as Jack makes connections between the experiences he had as a child and the shocking history of his homestead. 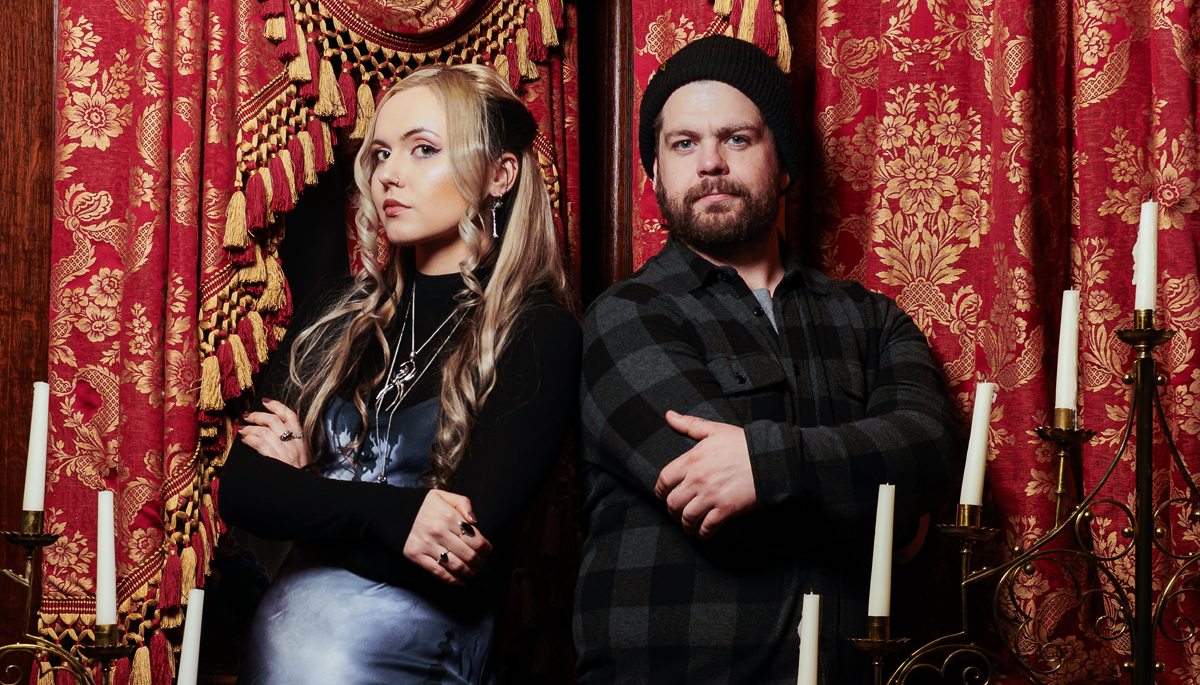 Photo: © Discovery+
Episode 1: Welders House
Ghost hunter and adventurer, Jack Osbourne, returns from LA to his family home, Welders House, for the most confronting ghost hunt of his life. What he experienced there, as a child, led him to his fascination with the paranormal and the unexplained and now for the first time he's going to investigate it.
This deeply personal investigation, looks inside the Osbourne's home and what it might have been like for a young Jack to grow up there, surrounded by ghosts. As the history of the house is discovered, connections between the past and the present validate some of what he experienced, while chilling new evidence opens up a whole new world of horror for Jack.
Will he unlock the secrets of the terrifying, unexplained experiences he had there as a young boy? Can he ever sleep soundly in the house again?
Episode 2: The Swan & Royal Standard
As Jack comes to terms with the revelations from the previous night's investigation at Welders, partner investigator Kate Cherrell digs deep into the history of the surrounding area and discovers that most of the places that Jack frequented as a child are paranormal hotspots. In fact his home county, Buckinghamshire, is considered the most haunted county in England.
This sets Jack and Kate off on a paranormal hunting tour of Jack's childhood haunts to find out what else he was exposed to as a child. With exclusive access, they discover a sinister side to the The Swan Theatre, a regular favourite of the young Osbourne family. Then a night at their local, The Royal Standard pub, brings evidence so compelling that even the most cynical of sceptics would struggle to explain it away.
Episode 3: Missenden Abbey
Jack's haunted homecoming concludes with a night investigating the notorious Missenden Abbey. Just a few miles away from the home he grew up in and minutes away from his school, this is somewhere he spent time as a child, oblivious to the spirits and ghosts that surrounded him. Could being around such high levels of paranormal as a child have impacted the trajectory of his paranormal career? Or did it make him a beacon for the paranormal?
As Kate and Jack delve into the history of the Abbey, they discover tales of evil monks and white ladies spotted in the grounds. In a profound ending to the investigation, Jack comes full circle. In the town he experienced his first ever terrifying experience, he has another that stands out as the most significant of his ghost hunting career...
'Jack Osbourne's Haunted Homecoming' is available to stream exclusively on Discovery+ from Sunday, October 2.
Tags:
jack osbourneparanormaltelevisiontopicaldiscoveryplushaunted homecominghalloweenhalloween 2022