What Happened To The 13-Year-Old Who Invented A Free Energy Device? 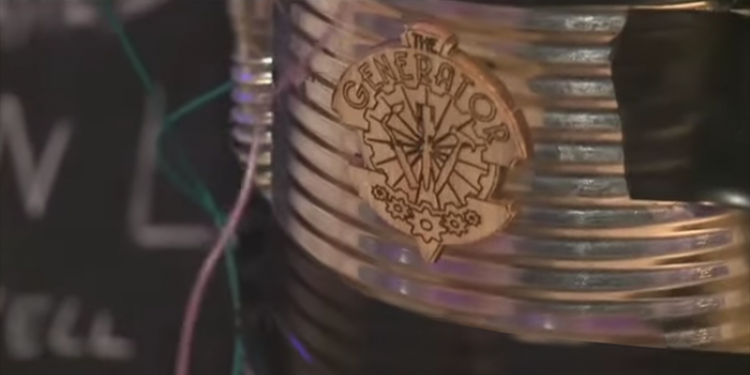 About a year ago a teenage inventor Max Loughan made headlines after creating a device which promised free energy.
The press hailed Max as a genius who could change the world. At the age of just 13 he invented a device costing just $14 which he claimed can suck pure energy from the electromagnetic fields all around us.
Max built his "electromagnetic harvester" out of a coffee can, some wire, two coils, and a spoon. Max says the harvester collects its power from radio waves, thermal and static energy, and turns it into useable electricity. In an interview on a local news channel, Max proudly holds up a frayed wire which is attached to the device at one end and says "this wire takes the energy from the air."
The device did seem to work, it was able to power a string of LED lights with no power source. The news reported posed the thought, "a $14 invention was able to do that, so imagine the same harvester on a scale twenty times larger."

So a year on, are we any closer to getting a larger scale version of Max's electromagnetic harvester? Well, no. Sadly this is another example of the media jumping on a story and hyping it up without any research.
Even if Max created a harvester twenty times bigger, it wouldn't generate anymore electricity and that's because there is a finite amount of energy that the device can collect. What Max has invented isn't a free energy machine, it's a crystal radio, a device which has been around for more than 100 years.
The crystal radio is the simplest type of radio receiver, which was popular in the early days of radio broadcasting, you may have made one yourself in kit form. It needs to battery or power to reproduce the sound and instead uses only the power of the received radio signal.
So, you see this isn't free energy. The energy which induces the current in the device's coils of wire is coming from the radio transmitter, which kicks out anything from a couple of watts to 50,000 watts.
Even at this maximum power, 1 kilometre away from the transmitter the most voltage you'd be able to detect is less than 0.5 volts. This is because the signal radiates outward in an ever-expanding bubble, trees, building and moisture in the air also absorb some of the energy.
The only way to increase the yield of the harvester is to turn up the power of the radio transmitter, clearly this is not free energy. This type of induction is also pretty inefficient, so the power put into a transmitter could never be fully recovered through a device like Max's.
I don't really want to be discrediting and destroying the dreams of a child, but I'm not blaming Max, I'm blaming the news outlets who covered this story. Journalists should have been immediately skeptical as free energy machines by their very nature are impossible as they violate the first or second law of thermodynamics.
As soon as I saw Max's bit of wire hanging out of the side of a tin can which was supposed to take energy out of the air, it was clear that this box of tricks didn't live up to its promise. Max shouldn't be deterred by this, he's clearly a smart kid, and although his first invention failed, to achieve what he did at 13 is still impressive.
Max is already taking online college courses at MIT, so this might not be the last we've heard of him.
12 Comments
Tags:
science