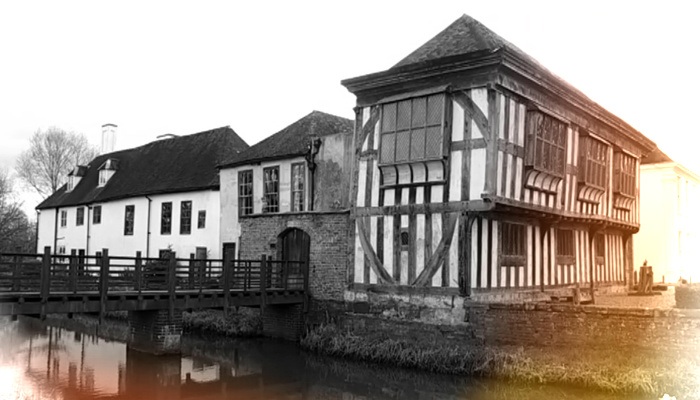 This week Yvette Fielding and her team of ghost hunters head to the village of Middleton in Warwickshire to carry out an all night investigation at a 13th century property which is said to be haunted by a grey lady and ghostly singing.
The oldest part of Middleton Hall dates back to 1285, a stone structure built for Philip de Marmion of Tamworth Castle. The first documented residents of the hall are Saxons, who along with the manor are mentioned in the dooms day book of 1086.
Middleton Hall was then passed on to a Norman lord placed there by William the Conqueror, in 1095 the Middleton estate was handed over to the de Marmion family who were Standard Bearers of England, jousted in the king's colours, and had the role of king's champion at the coronation of the new monarchs.
The hall played host to some very important guests over the years, including Queen Elizabeth I who stayed there for a week in 1575 and knight the then owner Sir Francis Willoughby in the great hall in the original part of the building.
Barons, lords, members of parliament, and even the legendary Knights Templars have all lived in this impressive house. 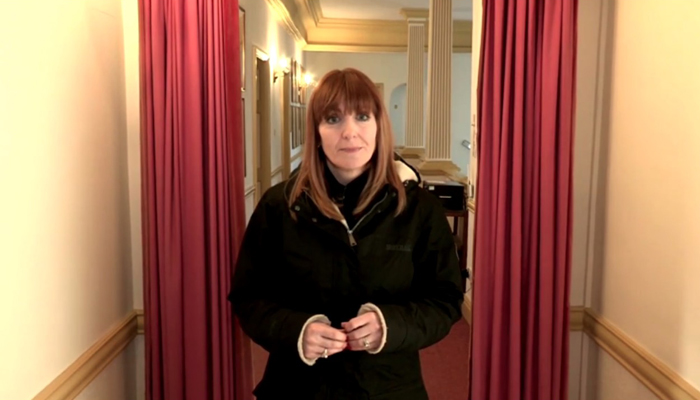 With so many people living here, many people will have died here too, so it's no wonder that just about every room has a tale to tell and it seems whatever lurks in the darkness shows itself to visitors with stark regularity.
The show's skeptic, Glen Hunt said "the house has been built in different times. The story would be I suppose stately home like this, built in different time periods, let's expect different ghosts from different times." Which isn't the most skeptical statement anyone has come out with.
One of Middleton Hall's most prominent hauntings has been witnessed by many visitors and is known as the grey lady, she's been seen walking up and down one of the corridors. A pianist recently saw what he believed to be the grey lady on a balcony overlooking the main during his performance.
As well as the grey lady, there's also the ghost of a lady in a scarlet dress who is said to be a former owner of the house. She was found at the bottom of the stairs by the servants with a broken neck.
In the older part of the property, plenty of paranormal activity is witnessed including doors slamming, footsteps, dark shadows, murmuring and whispering. It's also said that a spirit haunts this area which likes to pull people's hair.
Many visitors have reported feeling uncomfortable in the kitchen, lots of poltergeist activity has been seen, and people often report heading people moving around them, even though there's no longer anyone working in the kitchen.
Fred Batt, the show's demonologist, says with a house this old, there might have been a history of witchcraft. Yvette asks "so do you feel something negative?" Fred answer, "definitely. I can feel something in here now."
Fred added that he's planning to "try a few chants and try and bring something out. I don't think I'll have to do much actually, because I can feel something really strong in here. I think you'll get a shock here this evening."

Throughout the investigation, the team had four static cameras in locked off locations throughout Middleton Hall. One of those cameras was in the library, and before the lights were even turned off ahead of the investigation, something odd was caught on camera.
The footage appeared to show a chair moving on its own and the immediately after several books on a shelf to the right fell over. 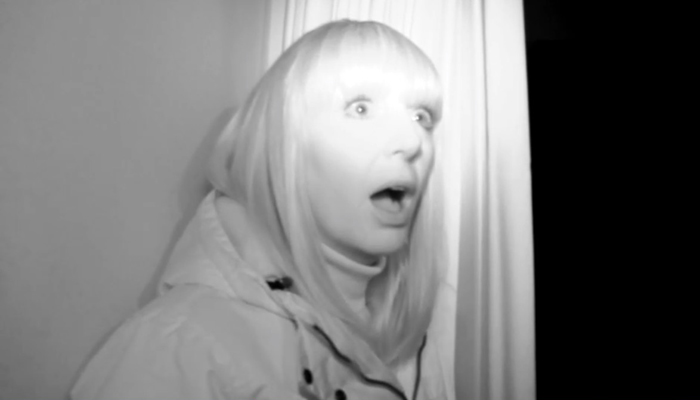 After such a great start the team started their investigation and they weren't disappointed, straight away Yvette saw something odd. She screamed, "I saw somebody. I swear to God I saw somebody. I saw them walking across here. I saw it with my own eyes."
Stuart Torevell asked, "me and Gregg were in front of you, would it have been our shadows?" Referring to camera man Gregg Smith. "No!" Yvette exclaimed. She than asked out to the spirits, "did I just see you? Tap twice if I saw you?" Immediately there were two taps.
Yvette then asked, "can I see you again?" To which the spirit replied yes. They then heard footsteps but the entity failed to show itself again.
They then went into a dining room, where Stuart heard a loud bang while simultaneously Vvette heard a growl in her ear. They called out to spirits during a seance around the table, which eerily began creaking. Fred thought he heard something outside the door and Stuart went to investigate. With the door open, Yvette saw something pass by the door in the hallway, she described it as being like the tail of someone's clothes.
Karl Beattie said, "there's definitely something here with us." 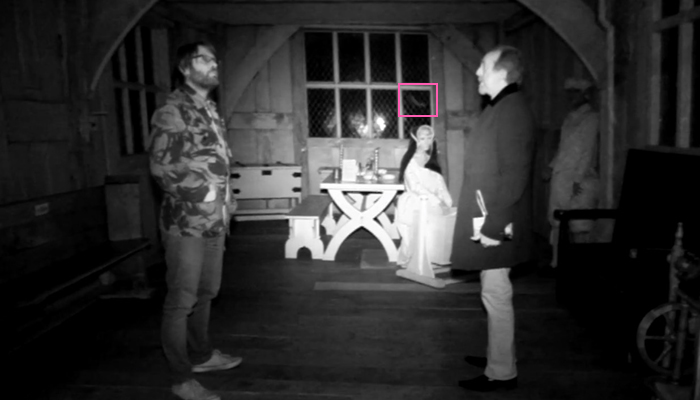 The team then split up, Gregg, Fred and sound guy Darren Hutchinson went to the great hall. There time here was fairly uneventful other than a few knocks and bangs. However, Gregg did get excited when he saw what he described as a "Chinese dragon orb" moving on camera.
While Darren was trying to talk to the spirits, Gregg suddenly said, "something just moved from the left of my camera to the right, floating across towards Fred." The object was clearly visible on camera. 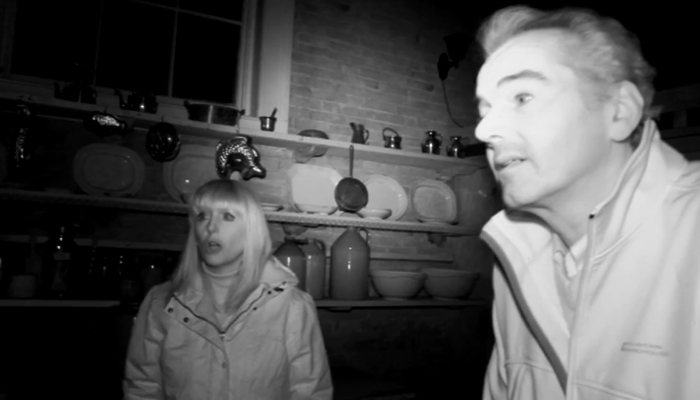 Yvette, Karl and Stuart were in the kitchen. If Yvette was trying to encourage the spirits to interact with them, she called out "if there's somebody here watching us now, can you walk towards us?" Then moment later they heard what sounded like footsteps that stopped dead in front of them.
Putting their hands out, all three reported it feeling colder where the footsteps seemed to have stopped. They then jumped back as if someone then blew on their hands.
Yvette said, "that was proper walking towards us and something has just stopped dead right there."
They then heard a sound which Yvette described like something being dragged near the fireplace, but to me it sounded like a car in the distance outside.
A solid metal handle was thrown across the room and landed with a bang, narrowly missing Yvette. The heavy object could have caused serious injury had it his someone.
They then heard a sound coming from upstairs and went to leave the kitchen and heard what sounded like a brick being thrown behind them but couldn't see anything on the floor. 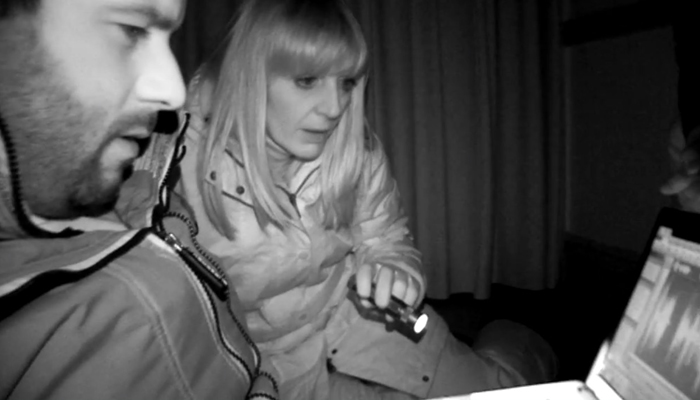 Meanwhile Yvette and Eamonn Van-Harris were back in the corridor where she'd seen the figure trying to capture EVPs, or electronic voice phenomenon which are believed to be the voices of spirits captured in digital recordings.
Yvette called out to any spirits which might be present, "hello, I saw you earlier, the lady who walks the corridor please can you tell me your name."
Eamonn boosted the audio and played it back, it contained a few odd sounds but nothing that could be described as a voice.
So, Yvette tried again "please, if you're the lady who walks this corridor give me your name." This time when they reviewed the recording, what sounded like a woman saying the name "Louise" could be heard.

Back In The Kitchen 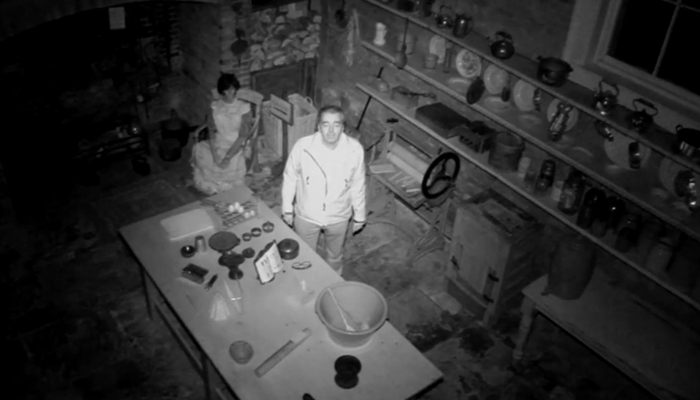 Karl and Stuart were wandering the house alone when Karl heard a kid's laugh, he described it as "like a giggle," however Stuart said he didn't hear it and nothing was caught on camera.
They then went back into the kitchen, Stuart refused to go down the stairs in the kitchen and remained at the top of the stairs, still a little wary after the previous incident in the kitchen.
After a while, they decided to go and get a cup of tea and call it a day. 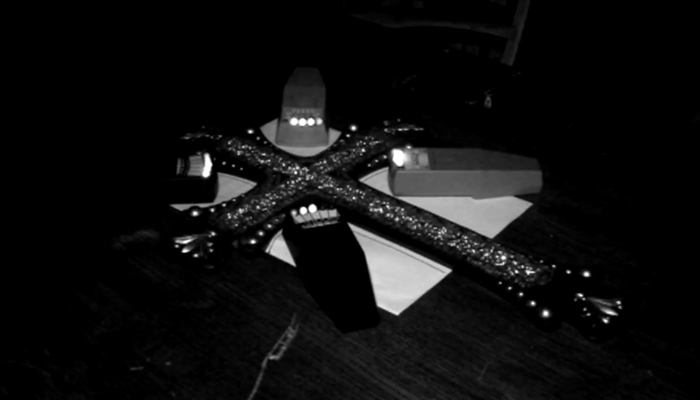 The show ended with some footage from one of the locked off cameras which was left recording in the library. The shot showed a cross surrounded by four EMF meters around it. All four of the meters lit up at once and the table started vibrating.
Based on that the team went to library for the last vigil of the evening, but the séance fell silent and they called an end to the night.
For reviews of all of the new episodes, plus highlights and evidence from the shows, and to find out when Most Haunted is on next, visit the Most Haunted episode guide.