Most Haunted At The Moat House, Tamworth, Part One - Series 22, Episode 9 Review 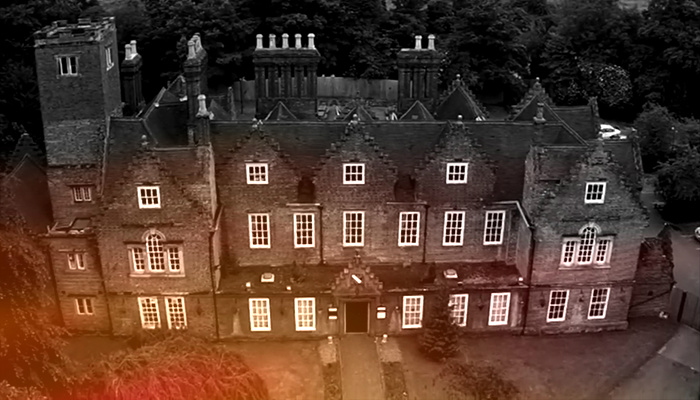 This week Yvette Fielding starts a two-part investigation of a building which has had many uses over the years. It started its life as a private house, before becoming an asylum. Today it is a thriving bar and restaurant in the heart of Tamworth.
It was originally built in 1572 by the influential Comberford family, but records show that a building has stood on this site as far back as 1369. The house was of such importance and stature that future king, Charles I stayed there in 1619 when he was the Prince of Wales.
Having survived the civil war, the Moat House remained in private hands until 1815, when it became an asylum for the mentally ill until the 1950s. At this time the house was offered to Tamworth borough council free of charge, but after they declined it was later sold privately and turned into a pub, and has served that role ever since. 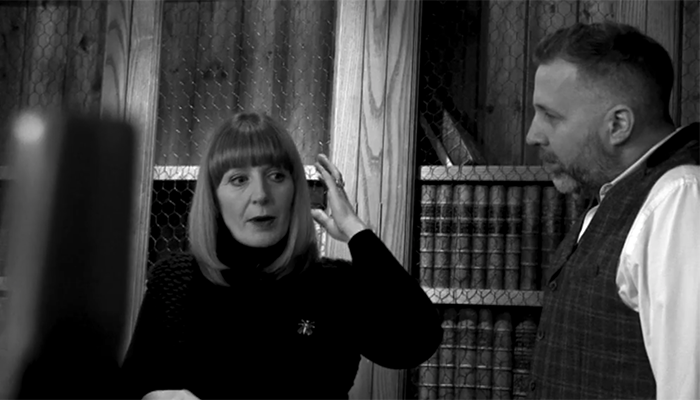 It seemed clear from the offset that the Moat House was going to be an interesting location. Yvette says that the house "already before anything has happened, before we begin our investigation, has become one of my favourites." This was based on the intriguing stories about the property, the tales of hauntings and the way the house looks.
Worryingly, she says that the house reminds her of Standon Hall, "it has that same vibe to it." Standon Hall, Staffordshire was one of the team's most active investigations to date, and involved a knife being seemingly thrown around the kitchen.
Based on this Karl Beattie, who was at the centre of the knife incident, said "I'm not going in any kitchens then." But getting serious, Yvette warns him, "there is a known story of a knife narrowly missing somebody downstairs in the kitchen, and I don't want to get into a bossy argument or anything like that, but can we please promise that no one is going to call out for anything to do them any harm," she adds, "I don't think you're going to need to."
Early in the episode Yvette shows us around the restaurant area of the building, where guests have reported hearing their name whispered in their ear. While filming in this area Yvette had a similar experience. She heard what sounded like someone clicking their fingers in her ear. The ghost of an elderly man smoking a cigar has been seen walking around the restaurant and into the bar.
While filming in the restaurant before the investigation, a chair fell over with a crash and almost hit the show's producer Louise Jones as she walked past. Although she was close to the chair, the team unanimously agreed that Lou wasn't the cause. Sound recordist, Darren Hutchinson said "the first thing you think is 'Louise caught that,' but on reflection it's not possible because it was after she left and there's nothing on her that could have taken it."
They stood the chair back up and moments later it fell again, this time there was no one near it at all, not even passing. Although the evidence was impressive, the show's resident skeptic, Glen Hunt said "it doesn't take much to move a bit of furniture around and knock something, it could have been inadvertently hit by someone's boot or something like that."
The upper floor of the building has a very different feel to it, Yvette says "this part of the building really does freak me out." Most of the rooms are empty and in a state of disrepair. It's said that this floor is haunted by a dishevelled old woman who is believed to be a former inmate of the asylum and someone who died in mysterious circumstances.
While Yvette and Glen discussed the stories associated with this part of the house, they heard a crash. Spinning around they found that a dinner plate had been seemingly thrown behind the camera men. With both cameras on Yvette at the time, the event wasn't caught on film, but Yvette said, "I saw it flying behind you. It flew from behind you, at you."
The house has a distinctive embattled tower which Yvette explains is haunted by the ghost of a little girl. It's said that she was locked in the tower by her father and died as a result of a fire. The details of the incident have been lost over time, it's not known if she died in the fire or by falling from a window while trying to escape the blaze. Her spirit is mostly seen and heard in the tower but has been witnessed all over the building. Most often it's in the form of a young girl singing softly, a lullaby that can be heard over and over. 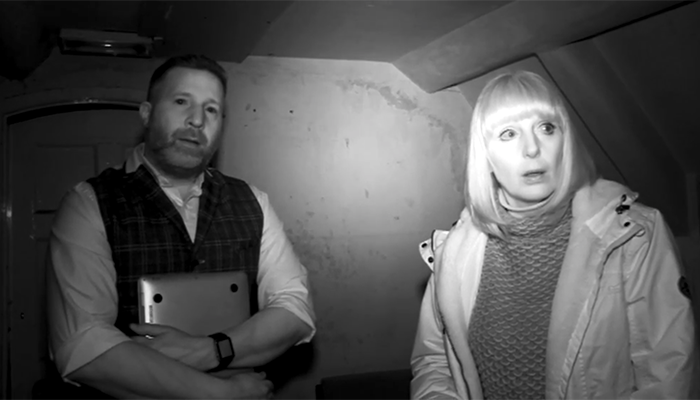 With the lights off the gang started their investigation, but one member of the team wasn't keen. Yvette's dog Watson, who is usually quite chilled out, didn't want to be upstairs in the dark and made his own way downstairs to safety. He reluctantly returned to the upper floor once called, but was very unsettled.
Yvette, Glen and camera man Stuart Torevell then continued their investigation of the upper floor. Straight away a door seemed to shut on its own. So, Yvette started to call out, "if there's somebody here, can you move something? Can you throw something at Glen?"
After hearing footsteps, the team went to investigate, but as soon as they opened the door, Watson made a dash for safety again. At this point Yvette decided it was too much for him and took him back to their base room, but Yvette return to continue her vigil with Glen and Stuart.
Yvette then thought she saw something moving at the end of the corridor, but it wasn't visible on camera. The gang went to investigate, but found nothing. They were then overwhelmed by a strong smell which they described as smelling like a sewer and was making Yvette feel sick.
As they returned to their previous location, they heard a clatter as another plate was thrown. Glen had left his laptop recording in the room where the plate was thrown, when playing it back they heard a voice just before the incident which sounded like someone snapping, "get out!" 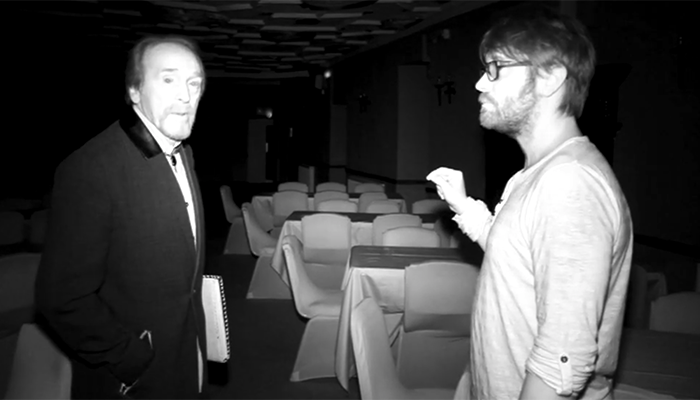 Meanwhile, Darren was in the restaurant with the show's demonologist Fred Batt, and Gregg Smith manning the camera. They straight away started hearing knocks and bangs around them as Fred called out to the spirits. Darren said "I don't feel like it's an evil place, I just feel that it's an active place." Darren wondered if Fred had summoned up something nice, rather than evil. But Gregg reminded him, "he's a demonologist, not a fairyologist."
Apart from a few knocks and bangs, there was no major activity in the restaurant, but Karl was getting freaked out on his own in the tower.
We joined him as he was climbing the ominous stairs, armed with just a camera and a torch. He called up into the tower and what sounded like a girl laughing could be heard in response. He then heard strange wheezy, breathy laughter, followed by another very odd sound which had Karl jumping in fear. 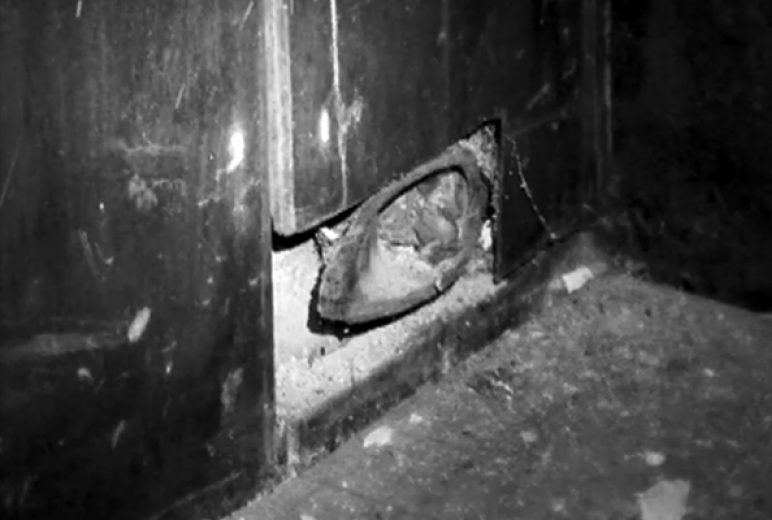 Karl then made an odd discovery, there seemed to be an ear embedded in the wall, it wasn't really clear exactly what it was due to the black and white colouring of the night vision, but it was enough to freak Karl out.
In the tower, Karl repeatedly heard laughing and giggling, as well as what sounded like footsteps. After a few more jumps and scares, Karl decided to call and end to his lone vigil, "it really is too much for me."
The episode ended with Fred outside conducting an incantation and Yvette, Karl and Gregg on the upper floor, where they heard an odd sound and spun around. We didn't get to find out what the cause of the sound was, but we saw a shocked look on the team's faces, teasing what's to come next week in the second part of this investigation.
The new series of Most Haunted continues on Really. Watch on Freeview (17), Sky (155) and Virgin Media (129), or watch previous episodes of Most Haunted on demand on the UKTV Player.
For reviews of all of the new episodes, plus highlights and evidence from the shows, and to find out when Most Haunted is on next, visit the Most Haunted episode guide.
»Most Haunted At The Moat House - Part Two