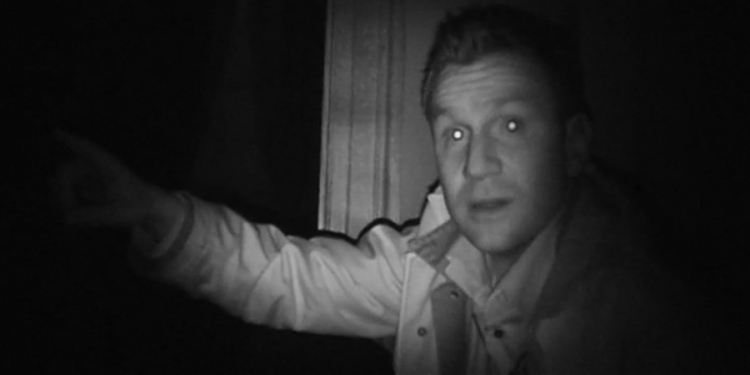 Yvette Fielding and a team of experts visit Croxteth Hall in Liverpool, a Victorian building where the ghost of a boy is said to have been spotted in the dining room, and footsteps have been heard in the attic.
Nestled within a modern estate, just five miles outside of Liverpool city centre, is a 210 roomed mansion that is said to be haunted by its previous occupants. It was originally the ancestral home to Earls of Sefton, the Molyneux family for over 400 years. Generations of this aristocratic titled family enjoyed the trappings of their country manor lifestyle, especially hunting and shooting on their enormous estate. The last earl, Hugh William Osbert Molyneux, died in 1972 and without a heir apparent, the local council took charge of the huge property.

The building doesn't have the grim or negative stories that are normally associated with haunted house, but none the less, it is said to be haunted by vision of its past. In the kitchens the sounds of servants can be heard busying themselves and the ghostly vision of a house maid has been seen. In the billiard room, dark figures have been seen sitting in non-existent chairs and the smell of tobacco has been smelt. Motion detectors continuously go off for know apparent reason in the breakfast room. The former servants quarters in the building's attic is also said to be a very active paranormal hotspot.
As always, Derek knew nothing about the property prior to arriving, but once on site he joined Yvette and paranormal investigator Phil Whyman in the breakfast room to start the investigation. In this room Derek picked up on the energy of a group of females, one of which he linked to the Molyneux family. In this room, Derek was constantly interrupted by the unexplained sound of creaking floorboards coming from around them.
They next moved into the card room and then the billiard room, where Derek picked up on several other members of the Molyneux family, this time male spirits.
After the initial walk around, the team switched to night vision and for the first time ever, parapsychologist Matthew Smith joined Yvette, Derek and Phil for the rest of investigation. Matthew normally appears at the end of each episode giving a more rational view from the safety of a studio, but this week he's in the thick of it.
Now in the dark, the team headed back to the breakfast room where they'd heard the sounds earlier and once again, while stood in the dark, they heard all sorts of unexplained sounds coming from around them. The show's producer, Karl Beattie was in the attic during all of this to see if he could determine where the sounds where coming from. He too heard odds sounds and after a little while, Yvette and her team came running upstairs to check on Karl after hearing an almighty crash, which made them jump out of their skins. Once upstairs they found that the sound had been a result of a piece of wood which had fallen near Karl.
Next Yvette and Matthew held a vigil in the principal corridor, a long hallway where a famous photo of a ghost was once taken. The pair witnessed a strange flash of light and several other light anomalies.
Meanwhile, crew members Catherine Howe, Suzanne Vinton and Wendy James conducted an investigation of their own in the kitchen, where they were convinced that they heard footsteps. This all proved too much for the girls, but Yvette took over from them with Karl, Phil and camera man Jon Dibley. The kitchen seemed fairly calm, although Jon thought he heard a sound like a knife being sharpened.
They then moved down to the wine cellar, where they heard sounds like footsteps. They then sat in silence for a while, but nothing happened until they gave up and were about to leave. As they did a candle holder was seemingly thrown onto the hard stone floor.
To try to cover more ground in this huge building, several of the crew embarked on lone vigils, including historian Richard Felix who failed to even make it into the kitchen before being scared away. So, Matthew replaced him in the kitchen before moving on to the principal corridor. Meanwhile, crew member Stuart Torevell, held a lone vigil in one of the servant's bedrooms in the attic, where he heard a door slam followed by several other bangs. He eventually ran out of the attic in fear.
Despite the team experiencing a bit of paranormal activity, on the whole it proved to be pretty quiet. After the investigation, Richard said, "although it was a very very interesting place to go around, a real privilege, I don't personally believe it is one of the most haunted buildings in England."
For reviews of all of the new episodes, plus highlights and evidence from the shows, and to find out when Most Haunted is on next, visit the Most Haunted episode guide.
Add A Comment
Tags:
paranormalmost hauntedtelevisiontopicalliverpoolshiver