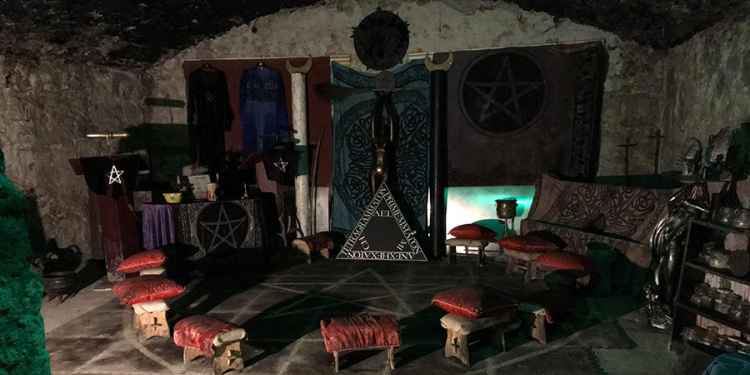 🖤
Yvette Fielding and the Most Haunted team have visited some of the UK's most paranormally active subterranean spaces since they first started investigating haunted locations in 2002 as part of the television show.
These underground spaces include manmade places like Aldwych Underground station - which the team visited in the first series, and natural caves like the famous Wookey Hole Caves in Somerset.
Amongst the haunted underground places that Yvette and the team have visited are the legendary Edinburgh Vaults. During their investigation of the location in 2008, team member Stuart Torevell was scratched by an unseen force, to this day it is still one of the team's most violent investigations.
Below is a complete list of Most Haunted episodes which were filmed underground. The list mostly consists of show caves and historic underground places which are open to the public.

WATCH: Amazon Prime • YouTube
04 May 2004 • Review
Yvette Fielding and the team explore Mary King's Close, a 17th-century building in Edinburgh reported to house the spirits of victims of the plague. A child's head, a severed arm and a girl in a blue dress are among the spooky phenomena to have been spotted there.

WATCH: Amazon Prime • YouTube
01 Apr 2008
Part one of two. Yvette Fielding and guest medium Brian Shepherd go ghost-hunting in the tunnels of Chislehurst Caves in Kent, a former mine that was used as an ammunition depot in World War One and an air raid shelter during World War Two.

WATCH: Amazon Prime • YouTube
16 Dec 2008
Yvette Fielding and the team return to Edinburgh to investigate the Niddry Street Vaults, where stories abound of witches, poltergeists and an evil misogynist.

WATCH: Amazon Prime • YouTube
24 Feb 2009
Yvette Fielding and a team of investigators visit Wookey Hole in Somerset, which is reported to be the location of numerous paranormal occurrences, including the 'Wookey Witch'.