Most Haunted Episodes Filmed In Yorkshire & The Humber 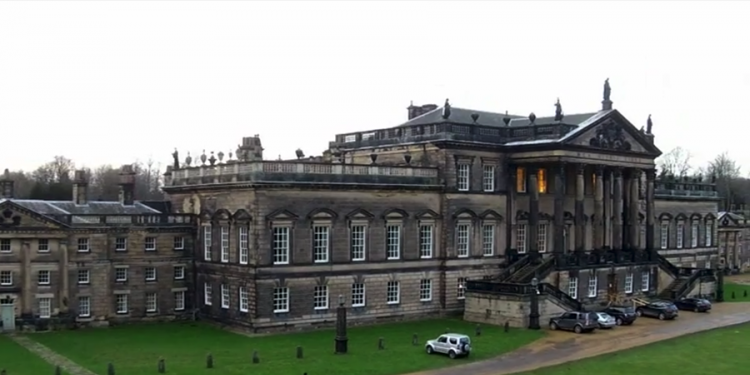 Since Yvette Fielding and her team of ghost hunters first appeared on our televisions in 2002, they've visited hundreds of haunted locations around the country, including a total of 30 episodes filmed in the Yorkshire and Humber area.
The region has given the team some of their best paranormal activity ever. During a 2015 live show at the infamous 30 East Drive in Pontefract, the show's executive producer Karl Beattie was pulled up the stairs.
The area is also home to Wentworth Woodhouse where the team caught what Yvette described as their most groundbreaking footage to date. Karl and Stuart Torevell caught a ghostly figure on camera in the building's huge stable wing.
As well as these 30 episodes, the team have also visited the area for several 'Most Haunted Live!' shows, including York Dungeon, Wakefield, and Wheeler Priory.
Below is a complete list of every location in the area that the team have visited.

Most Haunted Locations In Yorkshire & The Humber

WATCH: Amazon Prime • YouTube
20 Apr 2004 • Review
The Most Haunted team investigate the Manor House situated in the heart of County Durham in the North East of England, close to Durham City Centre.

19 Apr 2005
Radio 1 DJ Scott Mills is invited along with the team to investigate the Golden Fleece, which claims to be York's spookiest pub.

05 Jul 2005
Yvette Fielding and spirit medium Derek Acorah conduct a chilling investigation at the Black Bull inn in Haworth, a West Yorkshire village made famous by the Bronte family. The inn itself is rumoured to be the place where Branwell Bronte, brother to the three famous sisters, first developed addictions to alcohol and opium.

02 Aug 2005
Yvette Fielding and a team of paranormal experts visit Bolling Hall in Bradford where they uncover a link between a string of paranormal activities in the present day and a bloody battle hundreds of years earlier.

WATCH: Amazon Prime • YouTube
16 Jun 2010
Yvette Fielding and a team of investigators visit Kiplin Hall, a 17th-century building in North Yorkshire said to house the chopping block used in the beheading of Charles I.

25 Sep 2014 • Review
Yvette Fielding took her team of ghost hunters to a museum in Sheffield where they were on the hunt for spooks, but the paranormal activity proved to be too much for one member of the team.

16 Oct 2014 • Review
In the first half of a two-part Most Haunted special in East Yorkshire, Yvette takes her team to a place that has a reputation for harbouring restless souls.

23 Oct 2014 • Review
The current series of Most Haunted comes to an end with the second half of the team's mammoth two-part investigation of a Grade II listed regency house.

25 Jun 2015 • Review
Yvette Fielding and the Most Haunted team start their two-part investigation of a fort, which dates back to 1542. In the first part the team investigate the paranormal activity that's been reported above ground.

02 Jul 2015 • Review
The team embark on the second part of their investigation of a fort, which dates back to 1542. This time in the warren of pitch black underground tunnels.

09 Jul 2015 • Review
Yvette Fielding and the Most Haunted team investigate the biggest house they've ever investigated, it's so huge that the investigation is split over two parts, starting with the old college area and servant's quarters.

16 Jul 2015 • Review
The second part of the team's investigation of Wentworth Woodhouse, the largest privately owned house in Great Britain, and this time Yvette Fielding leads her gang down into the huge cellar.

23 Jul 2015 • Review
On a cold, snowy night Yvette and the team head to Batley in West Yorkshire to investigate a former family home, which had a legendary ghost story to tell.

30 Jul 2015 • Review
Yvette Fielding and her team of ghost hunters look into claims of ghostly children, a phantom tea lady and a malevolent entity at Knottingley Town Hall in Yorkshire.

18 Oct 2015 • Review • Location Details
Yvette Fielding takes the Most Haunted team to investigate one of the most famous and violent poltergeist cases of all time, in an ordinary three bedroom house at 30 East Drive in Pontefract, West Yorkshire.

25 Oct 2015 • Review • Location Details
The second part of Most haunted investigation of the paranormal activity that has plagued 30 East Drive, Pontefract. Already them teams investigation has proven to be one of the most active before they've even turned the lights out.

01 Nov 2015 • Review
Leeds' Thackray Medical Museum is steeped in history, built on the site of a Victorian workhouse and once used a wartime hospital. Will Yvette Fielding and the Most Haunted team find any evidence of ghosts from this building's grim history?

08 Nov 2015 • Review
Yvette Fielding and the Most Haunted team go in search of Victorian ghosts and poltergeist activity at a huge former woollen mill in Leeds, which was once the largest in the world.

15 Nov 2015 • Review
Yvette Fielding go in search of a grey lady, the spirit of a vampire and the disgraced ghost of a beheaded jester at Carr House in Kirklees Hall.

14 Jul 2016 • Review
What will the Most Haunted team uncover at Halsham House in East Yorkshire, a grand building with a vibrant history and a host of resident ghosts. Unlike most locations Yvette Fielding and her team visit are popular with paranormal researchers and are well documented, but Halsham House is a little different as all the reports come from the home's current owner.

14 Apr 2017 • Review
Most Haunted is not only the longest running ghost hunting show on television but it's also the the original. It's a show that divides the nation, those who believe in the paranormal and the skeptics, and last night Yvette and the team returned for the start of a brand new series on Really.

21 Apr 2017 • Review • News
In the latest of the long-running, British ghost hunting show, Yvette Fielding and team caught a figure on camera which Yvette describes as the show's "most groundbreaking footage" to date.

19 May 2017 • Review
In this week's of the long-running paranormal research show, Yvette and the Most Haunted team investigate Ripon Workhouse in North Yorkshire.

26 May 2017 • Review
This week on Most Haunted, Yvette Fielding and her team embark on the second part of their investigation in Ripon, North Yorkshire. Last week they tackled the town's grim workhouse, this Friday on Really they'll be spending a night in the cells at Ripon Prison & Police Museum.

28 Oct 2017 • Review
Tonight Yvette Fielding takes her team of intrepid ghost hunters to a 400 year old public house in West Yorkshire where they encounter some of the most violent poltergeist activity they have ever witnessed.

10 Nov 2017 • Review
Yvette Fielding and the rest of the Most Haunted team headed to a transport museum in Keighley, Yorkshire where they spent a night on the buses on the hunt for paranormal activity.

01 Feb 2019 • Review
Hodroyd Hall, an all-but-deserted manor house that boasts murder, death and intrigue among its history - becomes the setting for one of the most intriguing investigations to date.

08 Feb 2019 • Review
Yvette and the team are put to the test at Hodroyd Hall, as activity seems to be all around them, and something is following them.

15 Feb 2019 • Review
As Yvette leads her team in the last episode of the Hodroyd trilogy, they search to uncover the truth behind one of its most endearing mysteries.

WATCH: YouTube
09 Apr 2020
In another online 'extra' episode of Most Haunted, Yvette Fielding sends Karl Beattie and Stuart Torevell to investigate the ghosts and grim history of York Castle Museum.

WATCH: YouTube
30 Oct 2020 • Review • Location Details
The Most Haunted team return to a location in South Yorkshire for an exclusive online-only investigation. Hodroyd Hall near Barnsley proved to be a very active location when the team first visited in 2019.

29-31 Dec 2003 • 3 Nights • Review • The Best Of Most Haunted Live: Volume 2
The team commence a three day live investigation of the story of legendary highwayman Dick Turpin. They start upon Hampstead Heath and at the nearby pub which Turpin's father may have been the landlord of, the Spaniards Inn.
Hampstead Heath, London
Spaniards Inn, London
Epping Forest, Essex
York Dungeon, York
George Street Cemetery, York
Knavesmire, York
York Racecourse, York

Most Haunted Live! The Darkness Begins

Most Haunted Live! A Nightmare On East Drive