The AIMS Team Returns For Season 6 Of 'Mountain Monsters'

More monsters, more traps and more fun on tap for season six of the cult-classic series 'Mountain Monsters', as the AIMS team's wild hunt for Bigfoot premieres January 2 on the Travel Channel and Discovery+. 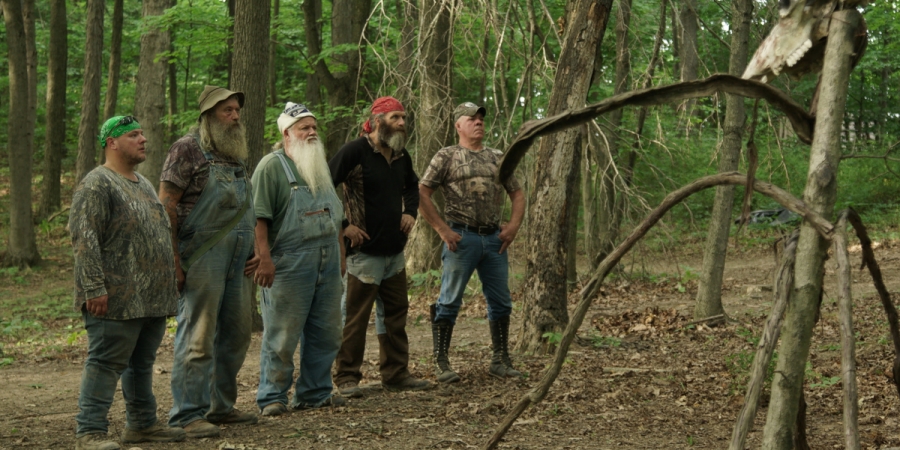 Photo: © Discovery+
It's Bigfoot or bust for the Appalachian Investigations of Mysterious Sightings team (AIMS) as they head back to the Tygart Valley in West Virginia.
The surviving members, Willy McQuillian, Jeff Headlee, Joseph "Huckleberry"' Lott, Jacob "Buck" Lowe and William "Wild Bill" Neff, are on a mission to go after a massive Sasquatch that they know roams these hidden hills.
Season Six of the cult-classic series, 'Mountain Monsters', returns with 10 new one-hour episodes beginning on Sunday, January 2 on Travel Channel and begins streaming the same day on Discovery+.
Before setting off, the AIMS team are given an old shoeshine box that belonged to their beloved late team leader, Trapper. While they are unsure of what the contents of the box mean, they know there must be more to it after finding an old picture of Trapper sitting next to a Tygart Valley sign. So, they hit the road equipped with the box and determination to catch Bigfoot.
The AIMS team soon discover that they are in a cryptozoic creature hotspot unlike any other. As they chase the numerous monsters of the Tygart Valley and build breathtaking traps, they continue to learn that Trapper may have been onto this secret all along, and the key to the entire adventure may be within their reach. Welcome to the biggest, baddest and craziest season of 'Mountain Monsters' yet.

Episode 1: Bigfoot Or Bust
Premieres January 2
The team hit the ground running as they head back to the Tygart Valley on a mission to prove that a Bigfoot roams those mysterious hollers. A rumbling sound from deep in the hills gets the guys moving, and they stumble upon a strange tree structure.
Episode 2: Cow-Killing Bastard
Premieres January 9
Things heat up for the team when Buck realizes that the legendary Grafton Monster has migrated to the Tygart Valley. It's a monster hunt unlike any other when they stumble across the mutilated carcass of a cow.
Episode 3: Bloodbath In The Woods
Premieres January 16
The AIMS team come in hot onto a local cattle farm after realizing the Grafton Monster is hunting livestock. They set off on a night-stalking mission to hunt for what they believe is the creature's most recent victim and encounter an absolute bloodbath.
Episode 4: Huckleberry's Monster
Premieres January 23
Huckleberry reveals his family's terrifying brush with the Grafton Monster. Later, Jeff breaks out his “hillbilly hazmat suit" to do some blood work on an old dog collar. And Buck gets into a hellacious fistfight with locals under the moonlight.
Episode 5: Trapper's Birthday
Premieres January 30
After a rip-roaring fistfight in the woods, the AIMS team gather together to remember team leader Trapper on his birthday. Huckleberry busts out a jar of his famous "Squatch Piss," and before long, Appalachia's favourite hillbilly sons are seeing double.
Episode 6: World's Biggest Bigfoot Nest
Premieres February 6
The team get a hot lead about a local hunter who claims to have found a massive Bigfoot nest hidden somewhere in the hills of the Tygart Valley. They are joined by super fan “Cowboy Ken” on a night hunt that brings them face-to-face with their most incredible Bigfoot find in team history.
Episode 7: A Monster Turf War
Premieres February 20
The AIMS team find themselves in the middle of a turf war between the Grafton Monster, Bigfoot and a pack of Smoke Wolves as these killer cryptids battle it out for territory. Wild Bill asks Buck to help him lose his substantial baby fat as Bill goes on a Squatch jerky diet. The team heads into the Tygart Valley in search of the source of a mysterious rumbling noise that is shaking the hills.
Episode 8: Rumble in the Hills
Premieres February 27
​​The search is on to find a lost brother when AIMS team member Willy goes missing somewhere in the hidden hills of the Tygart Valley. After hearing gunshots, the team make a shocking discovery and must evacuate Willy from the woods. Buck is forced to judge a contest to determine who has the best body on the team as the boys pop their tops, flex their muscles and show what their mommas gave them.
Episode 9: 1984
Premieres March 6
The AIMS team head out on a night hunt for Smoke Wolves after encountering a herd of fleeing cattle and a mutilated calf ripped to pieces. A local man brings the team to tears as he shares a heartbreaking story about the devastation inflicted on his family by the Smoke Wolves in the Tygart Valley. The team learns incredible new information about Trapper that dates back to 1984, as Huckleberry blows the case wide open.
Episode 10: Bigfoot On Camera
Premieres March 13
After a sudden Smoke Wolf attack on a local’s farm, the AIMS team is in full force and on the hunt for these deadly canine cryptids. They meet with a familiar face who can shed light, once and for all, on what Trapper was doing in the Tygart Valley all those decades ago. The team makes an earth-shattering discovery with their best Bigfoot evidence in team history – one that no doubt has Trapper smiling down, proud of his Appalachian sons.
Tags:
discoveryplusparanormaltelevisiontopical