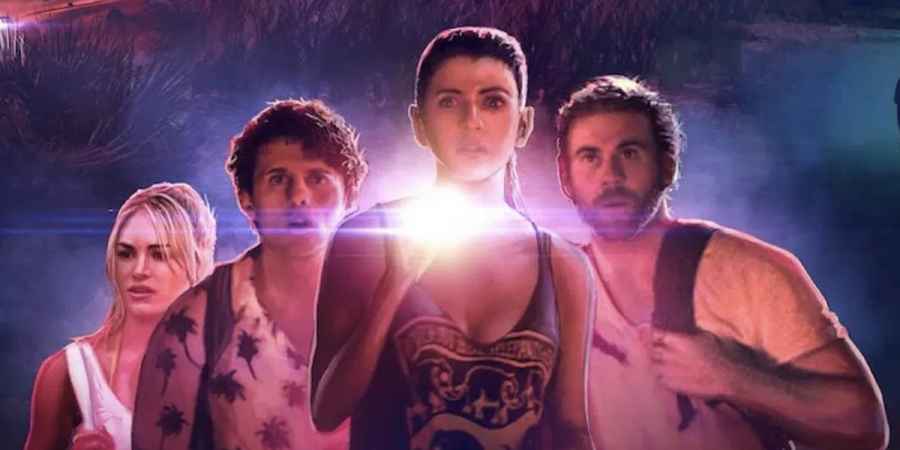 Streaming from the end of April, 'The Resort' is the terrifying American supernatural horror film about four friends who head to a holiday island to investigate reports of paranormal activity at an abandoned resort.
'The Resort' is written and directed by Taylor Chien, who created the chilling myth of a half-faced girl who is said to haunt the island retreat off of Hawaii that was forced to shut down after unexplained disappearances of dozens of guests.
In the trailer we meet Lex, played by Bianca Haase, a writer obsessed with the paranormal. For her birthday, three of her friends take her on a surprise trip to what's been dubbed "Hawaii's scariest resort". The locals who fear the island claim that the resort is haunted by an infamous ghost, the half-faced girl.
The clip includes shots of the friends arriving at the Hawaiian resort via helicopter. In one shot we see a location made famous by a similar scene in 'Jurassic Park'. In both films the chopper is seen arriving at the island over the Keopuka Rock, off the coast of the Hawaiian island of Maui.
It's not known if the movie shares any other Hawaiian locations with the famous dinosaur movie, but the abandoned resort featured in the trailer does appear to be a real disused tourist hotspot.
Lex and her friends set out to capture evidence of this unsettling apparition in the vast, beautiful but eerily empty resort. But, as any paranormal investigators knows, ghosts don't appear on demand and the resort initially proves to be a little too quiet. Then, just as Lex considers giving up on her Hawaiian ghost hunt, her friends start to disappear one by one, leaving her to battle the island's haunting alone.
The Vertical Entertainment release, which also stars Brock O’Hurn, Michael Vlamis, and Michelle Randolph streams from April 30, 2021 and will screen in selected US cinemas.
Add A Comment
Tags:
movieshorrortopicalparanormal