Most Haunted At Newton House, Part One - Series 16, Episode 2 Review 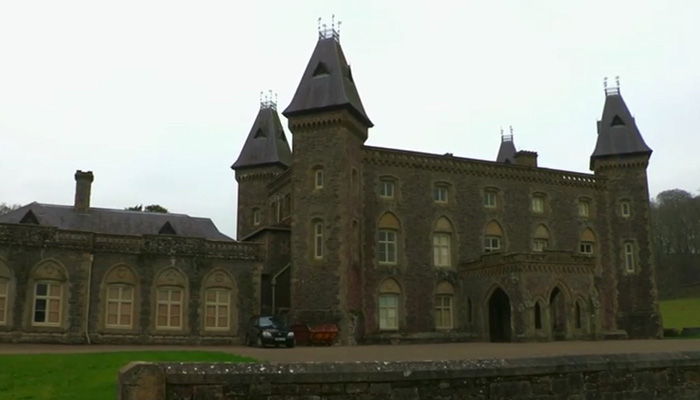 In this epic two-part investigation, Yvette Fielding and her team return to Newton House in Llandeilo, a haunted location they first visited as part of the 12th series in 2009. The house is said to be full of paranormal activity of every kind.
Despite the facade of this gothic building is Victorian, the main structure dates back to 1660 and Sir Edward Rice. The house echoes the tales of conflict and pain from its past, as it has been fought over for generations and changed hands many times over the year.
The team are joined by Matthew Tuck, Michael 'Moose' Thomas, Michael 'Padge' Paget and Jason James from Welsh metal band Bullet for My Valentine, who are apparently long-time fans of the show. The whole band seemed pretty nervous before the lights even went out, Matt said "I'm super excited about tonight's session. Excited but very very nervous, I think worst kind of thing I'd be frightened of is some kind of poltergeist activity." 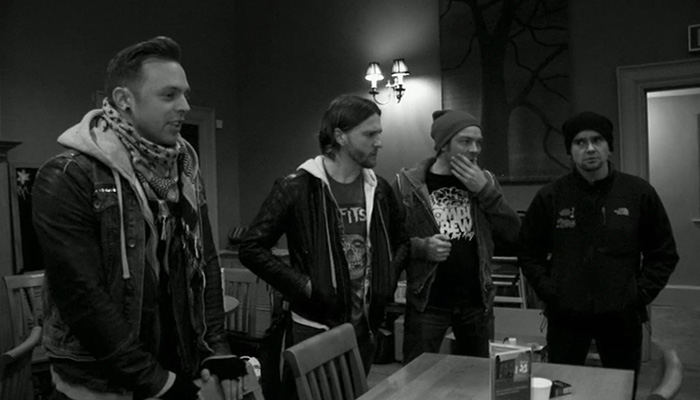 The most famous ghost who is said to haunt the house is that of Lady Elinor Cavendish, she was betrothed to a man she didn't love and to escape him she sought refuge with her family at nearby Dinefwr. She was followed by her suitor who strangled her to death on the upper floor of the building.
A man who witnessed the crime was also murdered to ensure his silence. The murderer himself is said to have been hanged from the upper balcony and he too now haunts the building.
Some visitors say that they experience a choking sensation as they walk up the stairs to the first floor and believe there is a presence still haunting the house. Others have seen the spirit of a haggard old lady and the ghosts of children playing on the stairs.
Down in the basement, three ghosts are said to haunt. The ghost of a dog, a gentlemen who is said to be chasing the ghost of a young boy.
Part of the house was once use as wartime hospital, and today the wards have been dressed up with items of that period to show guests what life would have been like. According to witnesses it's not uncommon for objects to move of their own accord, dark shadowy figures have been seen in this area. 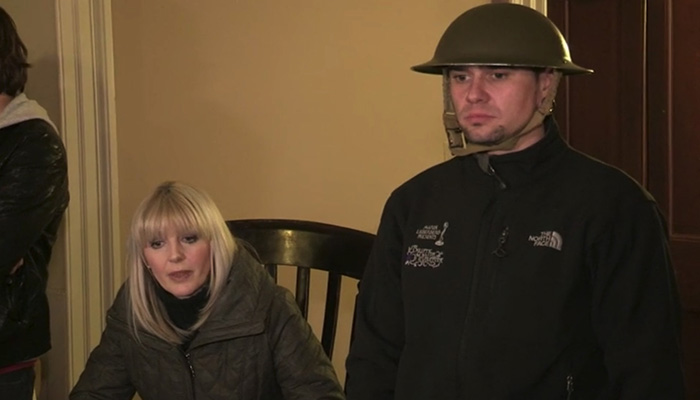 The action started before the lights went out when one of the newest members of the team, Mel Crump, heard an odd sound in the military room, it sound a little like static coming from an old radio even though it wasn't plugged in. Yvette then assembled the team in the old hospital area to being the investigation, and straight away an odd whistling sound was picked up on camera.
Seconds later a piece of medical equipment was seemingly thrown across the room as Yvette called out to the spirits. This was followed by several odd noises and then moments later another medical tool was thrown.
After that Yvette lead the gang upstairs and into a small store room where Yvette heard a growling noise and Jason, who was initially the most skeptical member of Bullet for My Valentine, got excited when he felt vibrations from underneath his foot.
Moving into another store room, Yvette was about to call out to the spirits when the show resident demonologist Fred Batt interrupted with a warning, "be very careful what you call out for on this floor, this whole floor, every room." Moose asked, "so there's nothing nice up here at all?" Fred answered, "nothing nice at all, it's all bad."
Jason from the band gestured to bring it on, so Yvette started calling out, "hello, is there anybody here?" Almost as if the malevolent spirits were showing themselves in response to Yvette's question, one of the team suddenly collapsed. 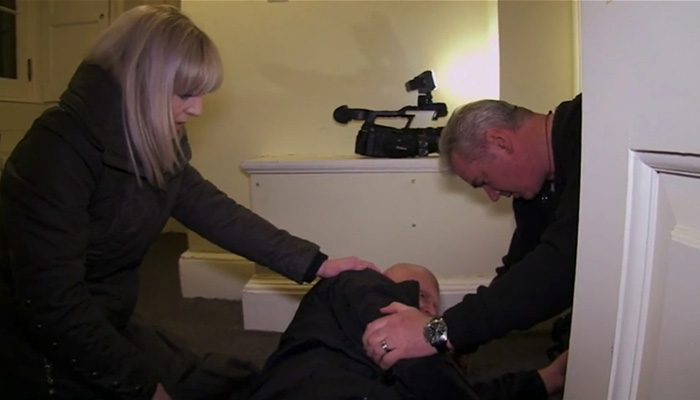 It was Stuart Torevell who was holding a camera at the time who had hit the deck. Yvette rushed to his aid to check he was OK. Stuart said "I'm fine, I'm OK." Karl Beattie asked Stu what had happened, but he wasn't really sure but insisted he was fine.
After a bit of recovery time, and now sat upright, Stuart said to the band "I don't remember falling over. I remember looking at you guys through the camera and the next minute just coming to."
Stuart was interrupted when from nowhere a piece of wood was thrown from along the corridor and landed at their feet. Moose said excitedly, "I saw it hit the floor."
The gang moved out into the corridor to investigate and the door they'd walked through seemed to slam shut behind them, it was most likely just slowly swung shut, but the guys from the band said they had shut it behind them when they left.
When they tried to walk away again, the door once again slammed. Fred went to investigate alone and while checking out the door, a piece of wood was once again thrown, this time narrowly missing him. 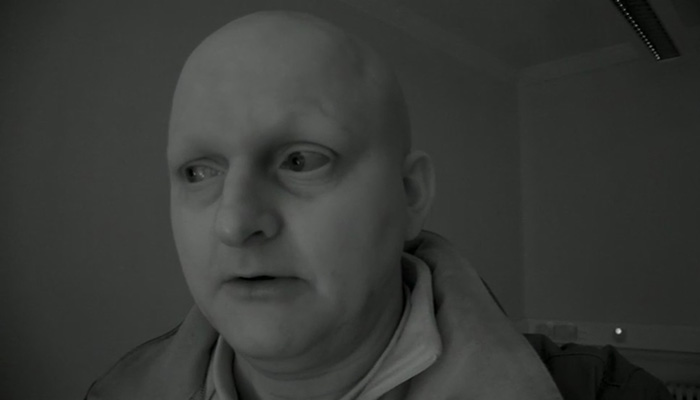 Stuart was holding a vigil on his own on the upper floor, where straight away he heard knocks, bangs and even heard a door slamming closed. Later Stuart panicked when a door closed right in front of him, "holy s**t, that door close! You saw that, I saw that!"
There was light streaming in form underneath the door, which Stuart said was from a motion activated light. This would suggest that someone was outside the room. Then all of a sudden another door to the room he was in closed and seemed to lock itself. As Stuart shouted for help, the door opened on its own.
Meanwhile, Karl was along in the dark in a room in the attic. He too heard strange noises, starting off with footsteps and banging, which seemed to be right near him. Karl whistled and asked the spirits to copy, and got a little freaked out when they did.
While exploring further, Karl ended up on the roof, where he had the overwhelming feeling that something was going to push him off the edge. He said "I don't know if it's because I'm tired, scared, or whatever", but he hurried back inside as quickly as he could.
It was then Karl who found he was locked in, trying the door he found the handle wouldn't budge. Luckily for him, after a few minutes the door opened and head was free.
Karl and Stuart rejoined the rest of the team who had moved to the military room to conduct a ouija board session. Just as they were about to get started they heard a bang and that's where the episode came to an end. But I'm sure that Newton House has got plenty more scares up its sleeve. The action continues next week.
For reviews of all of the new episodes, plus highlights and evidence from the shows, and to find out when Most Haunted is on next, visit the Most Haunted episode guide.
»Most Haunted At Newton House - Part Two