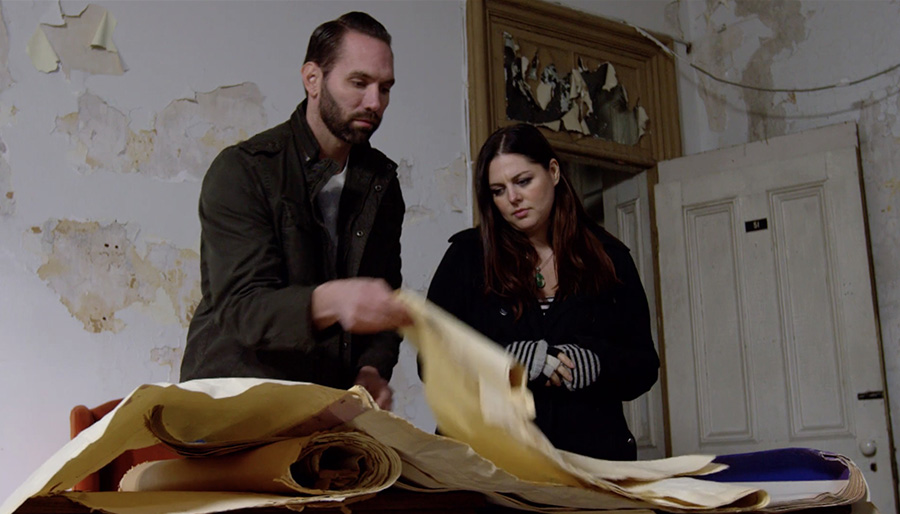 Nick Groff and Katrina Weidman investigate a haunted asylum in West Virginia, a mammoth paranormal hotspot consisting of 13 buildings with a very grim past.
Here in the UK, the series is being billed as 'Paranormal Lockdown US', and although the show is new to Really, it actually pre-dates the recent UK series and has previously been shown on Quest Red in the UK. This week Really brings us the first ever episode of the show, which originally aired in the US in March 2016.
The episode starts with an introduction to the creepy Trans-Allegheny Lunatic Asylum, which we're told "sits on 666 acres of pure hell in Weston, West Virginia." Originally the asylum was designed to house 240 patients when it opened in 1864, but at its peak it was crammed full with over 2,000 mentally ill, criminally insane and neurologically damaged souls. At this time medical treatment was primitive and patients were subjected to barbaric practices like lobotomies, isolation and electric shock therapy.
After the asylum was shut down in 1994, its owners allowed a select few paranormal investigators inside to investigate its sprawling corridors and abandoned wards. Some claim to hear disembodied screams and doors slamming. Others, including Nick, have reported seeing dark shadowy figures moving through the vast hallways.
Nick, who visited the asylum in 2009, told Katrina as they approached the foreboding building, "on the fourth floor up there, I remember seeing a shadow figure down the hallway and that's the real reason why we're here, we need to capture and document these shadow people. They're so scary."
Katrina, who has never visited the asylum before, said she had a nightmare about the location prior to arriving. She said, "the only thing I remember from it was I was in this dark hallway and I just started hyperventilating uncontrollably." 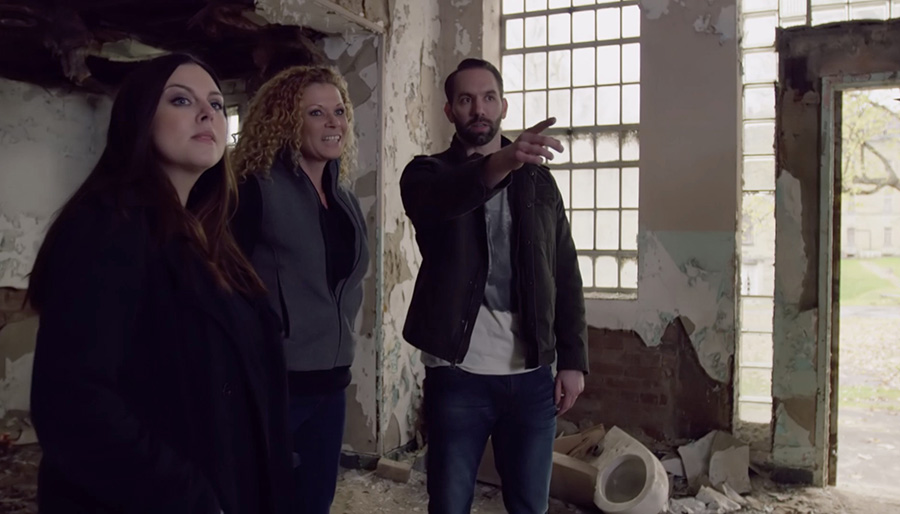 On the first day of their 72-hour lock down, Nick and Katrina started their investigation in the second oldest building on the site, the women's auxiliary building. Joined by the property's owner, Rebecca Jordan-Gleason, Nick thought he saw someone stood in a doorway upon entering the building. So, Nick pulled out his digital audio record in the hopes of capturing spirit voices in the form of electronic voice phenomenon, or EVP.
He called out "did I just see you?" Upon playing back the recording, a scratchy sound could be heard. The team believe this was a voice saying "yes" - a direct intelligent response to Nick's question. Rebecca then asked, "do you know that you're dead?" And a similar scratchy sound appeared to say "no" in the recording.
Nick was very excited by this early evidence. He said, "getting an intelligent response this quickly and in the daytime is exciting. I can only imagine what we'll find when we're confined here at night." 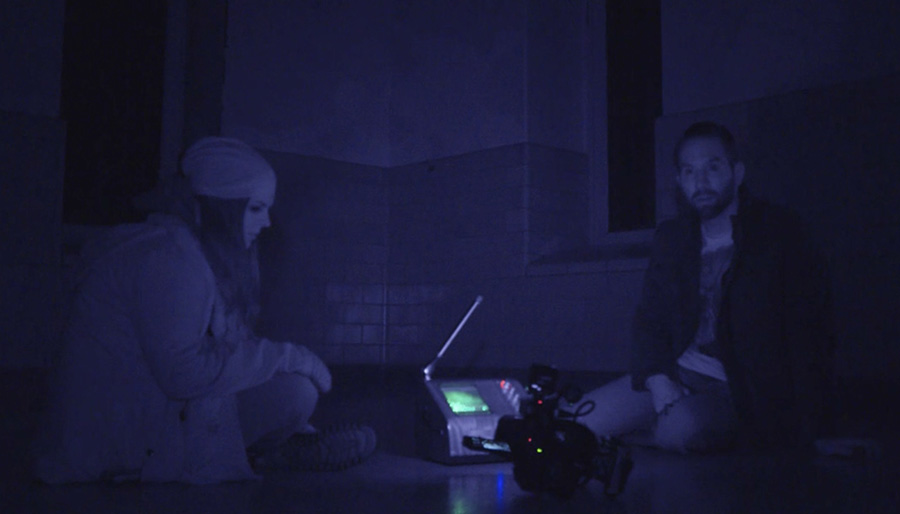 As the sun set at the end of the first day, Nick and Katrina really get stuck into their investigation. Now with the cameras switched to night vision, they begin their night time vigil in Ward F, where two patients were brutally murdered 30 years ago.
Nick is using a new ghost hunting gadget designed especially for the show by George Brown. Nick said that the Geobox taps into three different frequencies. He explains "you have EMF, vibrational wave and also radio frequency." By monitoring these three differing types of energy it's believed that spirits can come through and offer intelligent responses, which are spoken aloud from the device.
Soon after switching it on, the box seemed to say "Nick". Another voice then came through saying "come with us". However Nick says that after two hours with no other intelligent responses, they decide to move up to the fourth floor where Nick saw a shadow figure in 2009. Almost straight away they heard a sound like someone saying "shhh" to them.
Nick decides he wants to set up camp and sleep in this part of the building, but first he conducts another EVP session. This time a noise was heard which Nick interpreted as "yep," in response to his question about the fourth floor being scary. As he eventually climbed into his sleeping bag, a loud bang can be heard next to him in the darkness.
The next morning the duo resumed their investigation. The first bit of activity was when Nick heard someone walking along a corridor outside the room they were in, he went to investigate, but nothing came of it. They then conducted another EVP session. Katrina called out and when they played back the audio there was a response which the investigators thought was saying "shut up, bitch." 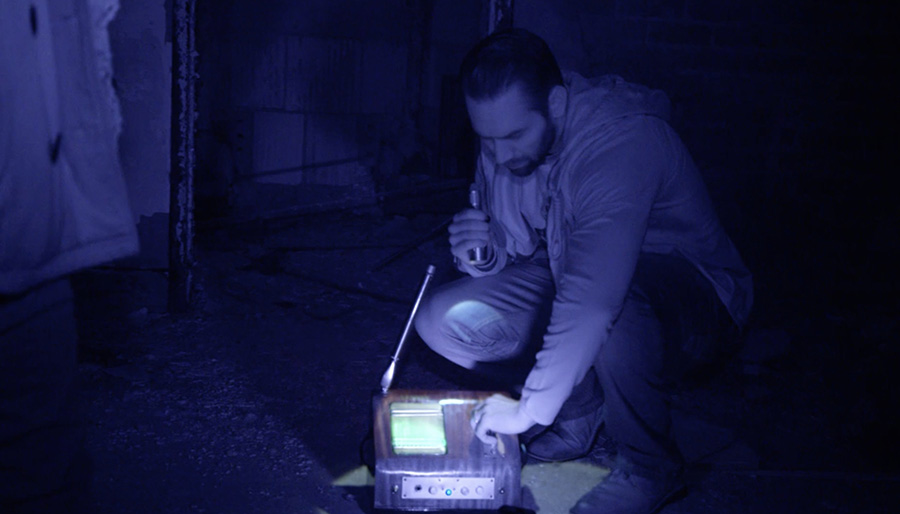 On the second night Nick and Katrina head back to the women's auxiliary building, this time armed with the Geobox. The first response that came through the box was a female voice simply saying "hello". In response to this, Katrina asked "do you want to talk to us". This time a male voice replied saying, "don't say a word". The investigators concluded that a male spirit wasn't letting the female spirit talk.
They had several more responses come through as they tried to urge the female spirit to speak to them. Then when Katrina promised to leave them alone if it said her name, she seemed to get the response she wanted. A shocked Katrina said, "when my name came out of the Geobox, I didn't believe it at first. And I'm listening back to our recording of it and you can, you can hear 'Katrina'."
The duo honoured Katrina's promise and returned to the medical building, which houses the morgue. As soon as they walk into the morgue Katrina feels like she's being influenced by something in the room, when she starts feeling chest pain. This was followed by a stabbing pain in her head. Nick wondered whether this could be connected to the grim procedure of lobotomies that once took place in the building. Katrina said, "I've been to locations before where I've picked up on how someone died or something traumatic."
Katrina decided to brave sleeping in the morgue in an actual coffin on a morgue slab. While in the box she heard odd sounds coming from the room around her, but manage to hold her composure and get a little bit of sleep. 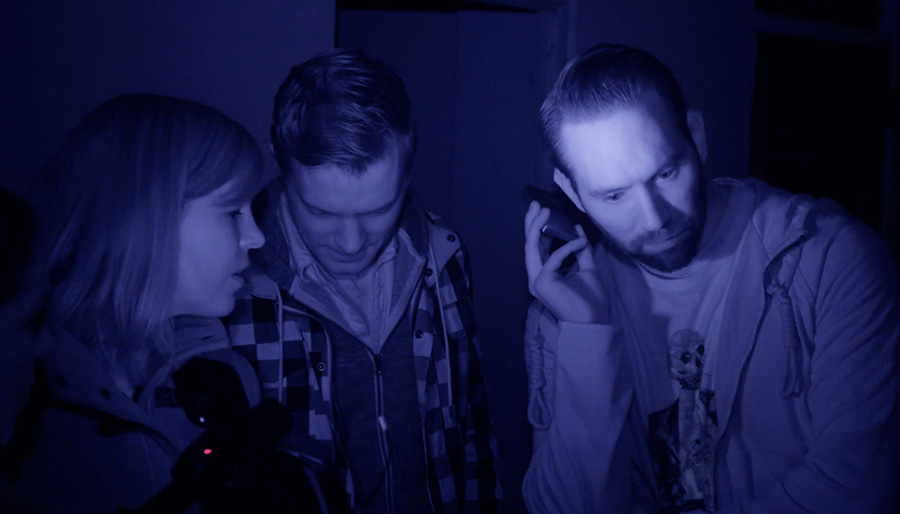 The next day, Nick and Katrina were joined by Amy Bruni and Adam Berry from 'Ghost Hunters' and 'Kindred Spirits'. They set off to investigate together and once again they heard a "shhh" sound, before heading back up to the fourth floor.
Adam decided to stay in the spot where Nick had slept the first night with an EVP rolling. Adam didn't last long on his own and minutes later ran back to the others. In his audio recording there was the same crackling, scratchy sound that the investigators interpret as a voice. This time it seemed to be saying "hello, Adam."
The guest investigators then left to allow Nick and Katrina to spend the final night on their own in the asylum. Soon after Nick seemed to become very anxious and was acting as if he was struggling to breathe. He said that it was due to him thinking he saw a dark figure stood near him.
Then camera man, Rob Saffi, thought he saw a shadow moving across the back wall of the room they were in. He described it as looking like a dark, snake-like mist and at the same moment heard what he thought was footsteps. The 72-hour-long investigation came to an end soon after.
'Paranormal Lockdown US' continues next week on Really as part of the channel's #Freakend event, bringing viewers two nights of paranormal entertainment every Thursday and Friday.
You can watch in the United Kingdom and Ireland as part of the Discovery family of channels. You can watch Really on Freeview (17), Sky (142), Virgin Media (129) and Freesat (160), plus YouView, BT TV and TalkTalk TV. Or watch previous episodes on demand on dplay.