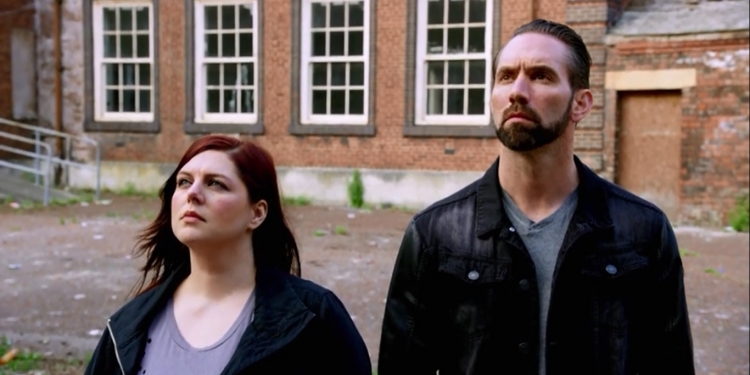 Nick Groff and Katrina Weidman's 'Paranormal Lockdown UK' comes to the Really channel as part of their weekly schedule of paranormal shows, which they called the #Freakend.
The US ghost hunting series will air at 10pm on Thursday evening from next week. Although the series is new to Really, sadly the ten episodes have already aired in the US and were shown in the UK on Quest Red in late-2018.
The series replaces the homegrown British show, 'Help! My House Is Haunted', which ended with an epic investigation of a whole village in Nottinghamshire last week.
The series was generally well received by British viewers, so if you didn't catch it last time around, it's definitely well worth a watch, perhaps even a re-watch.
The series follows the ghost-hunting duo as they spend 72 hours locked inside some of the most notorious haunted places in Great Britain, including Liverpool's Newsham Park Hospital, Margam Castle in Wales, and Cambridgeshire's Hinchingbrooke House.
The UK series follows two previous seasons which were filmed at locations across America, but sadly this is the last we'll see of Nick and Katrina together. Nick revealed on social media last year that the show will not be returning and insisted the move "wasn't by choice."
Since the duo's split, Katrina went on to star in 'Portals To Hell' with Jack Osbourne. This show was also part of Really's schedule before it came to an end a few weeks ago.
'Paranormal Lockdown UK' is well produced, beautifully shot, including stunning drone footage of the locations and features unique characteristic purple night vision shots. The two investigators use an array of high-tech ghost hunting gadgets to try to uncover proof of the paranormal.
The series starts on Thursday 6th February with an investigation of a now-abandoned prison in Somerset, that is said to be plagued by strange sounds, shadow figures and voices from the other side.
Later in the series Nick and Katrina find themselves in the vast Drakelow Tunnels - a former top secret underground military complex beneath Kidderminster, they hunt for the powerful spirits that are said to haunt Winchester's historic Royal Oak Pub, and explore the claims of ghostly activity at the once-luxurious Park Hotel in Morecambe.
For a complete list of the locations visited in this series, check out our 'Paranormal Lockdown UK' episode guide.
Really has become the go to channel for US paranormal television shows in the UK. At the end of 2019 the network announced it was expanding its paranormal offering to two nights of ghostly shows under the new label #Freakend, bringing a spooky end to the week on Thursdays as well as Fridays.
Before 'Paranormal Lockdown UK' on Thursday nights you can catch Jason Hawes, Steve Gonsalves and Dave Tango's new ghost hunting series, 'Ghost Nation'. The team were among the main cast members of the hit television series 'Ghost Hunters', and are now investigating under the umbrella United Paranormal Research Organization (UPRO), a new wider network of paranormal investigation teams. Their investigations form the basis of the new ten-part series which started in January on Really.
The #Freakend continues on Friday nights with brand new episodes of the long-running US ghost hunting show, 'Ghost Adventures' fronted by Zak Bagans. The new season features the GAC's investigation of Lutes - a former casino with a shady past, Melrose Hotel - a historic building plagued by dark spirits, and St. Ignatius Hospital where visitors have heard strange growls and been attacked by unseen hands.
Later on Fridays, Really are showing 'Haunted Hospitals'. The 13-part show is new to the channel, but was also first shown last year on Quest Red, so may be familiar to some viewers. 'Haunted Hospitals' features real life supernatural stories from medical staff and patients, who recount their chilling encounters with paranormal activity inside hospitals, nursing homes, morgues and medical institutions.
You can watch 'Paranormal Lockdown UK' on Really on your television in the United Kingdom and Ireland on Freeview (17), Sky (142), Virgin Media (129) and Freesat (160), plus YouView, BT TV and TalkTalk TV. Or watch previous episodes of #Freakend shows on demand on dplay.
Tags:
paranormaltelevisiontopicalparanormal lockdownnick groffkatrina weidman