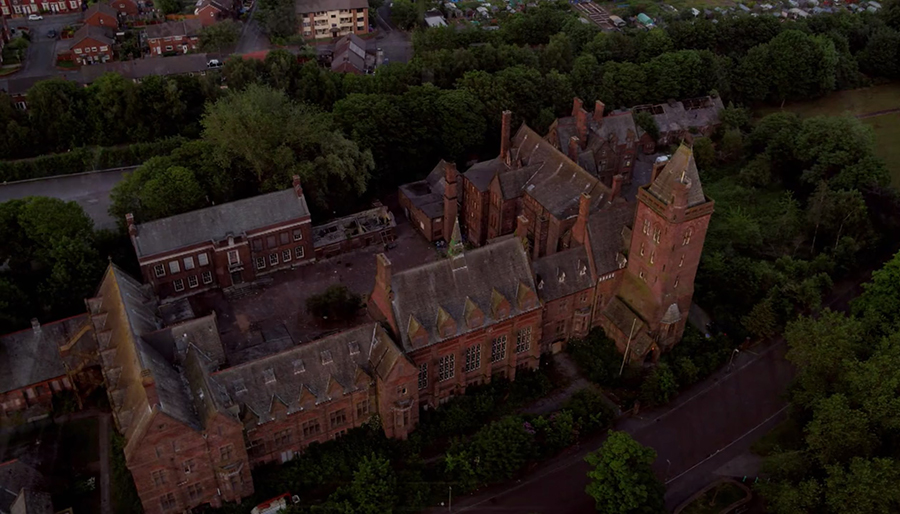 In the fifth episode of Quest Red's newest ghost hunting show, paranormal investigators Nick Groff and Katrina Weidman spend 72 hours locked inside Liverpool's Newsham Park Hospital, a location known for its extremely dark and negative haunting. Nick and Katrina have been researching the building for years and now they're going to be locked inside of the former orphanage, which is now an abandoned grade II listed building.
The hospital was originally built in 1874 as the Liverpool Seamen's Orphan Institution. It was for many years home to the orphans of the city's sailors lost at sea. Life was tough in the orphanage, siblings were routinely separated and harsh punishment was handed out to children who dared to break the rules. Hundreds of children in this grim institution, many never knowing a real home.
The building became a hospital in 1954, before being converted into a psychiatric hospital in 1992, during this time it held some of the country's most infamous criminally insane, including the notorious serial killer, Ian Brady. Along with his accomplice, Myra Hindley, he was responsible for torturing and killing five children in the 1960s, the case is known as "The Moors Murders".
With such a grim history and so many dark souls passing through this now derelict building, it's no surprise that it now has such a well known reputation as one of the UK's most active paranormal hotspots. The phenomenon in the hospital includes sightings of dark shadowy figures, apparitions and disembodied voices.
The hospital covers an area of about 99,000 square foot and consists of six main buildings, all with their own creepy stories. One area known as "the punishment hall" was a corridor of small cupboards where badly behaved children were locked away until they learnt their lesson. Nick said, "Newsham Park Hospital has the reputation of being one of the most sinister locations in the whole of England." His co-host, Katrina, added "it's this beautiful old Victorian monster of bricks, I can only imagine what a little child would have felt when they were walking up the stairs into the entry way. I mean, as an adult I'm scared." 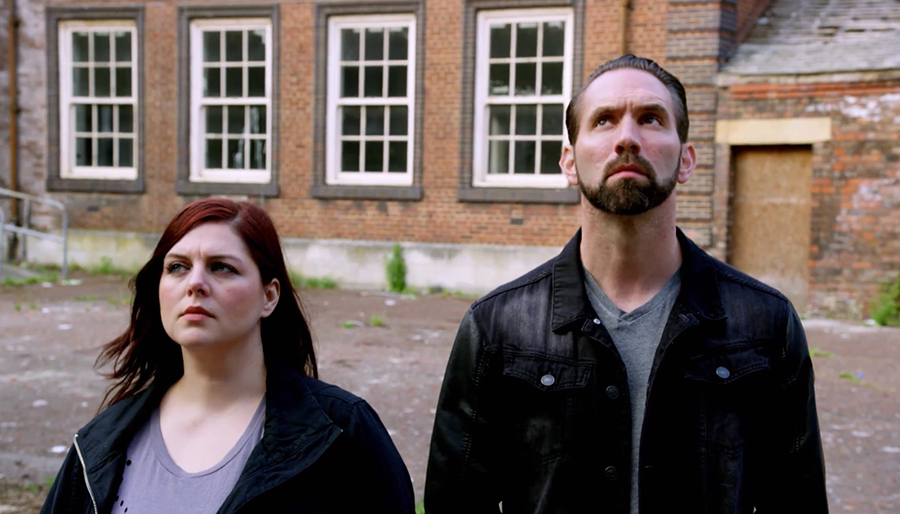 The pair were shown around the hospital by local historian, Paul Smailes, who showed them the vast building's paranormal hotspots, including the huge main hall, where the orphans would have once eaten their meals. Visitors have reported hearing footsteps and unexplained noises coming from a balcony in this room.
In G ward, Paul show's them a slab table where dead bodies would have once been placed. According to Paul, some past paranormal investigators have been brave enough to try a Ouija board on top of this eerie relic.
The basement is said to be a dark and negative place where strange light anomalies have been seen, as well as the apparition of a headless man wearing white. When the current owners took over the building, they found that Devil worshipers had broken into the building and had been performing satanic rituals in the part of the building that housed the morgue and incinerator. Pieces of bone and teeth have also been found in this area. Katrina is worried that these occult practices could have invited in evil spirits. 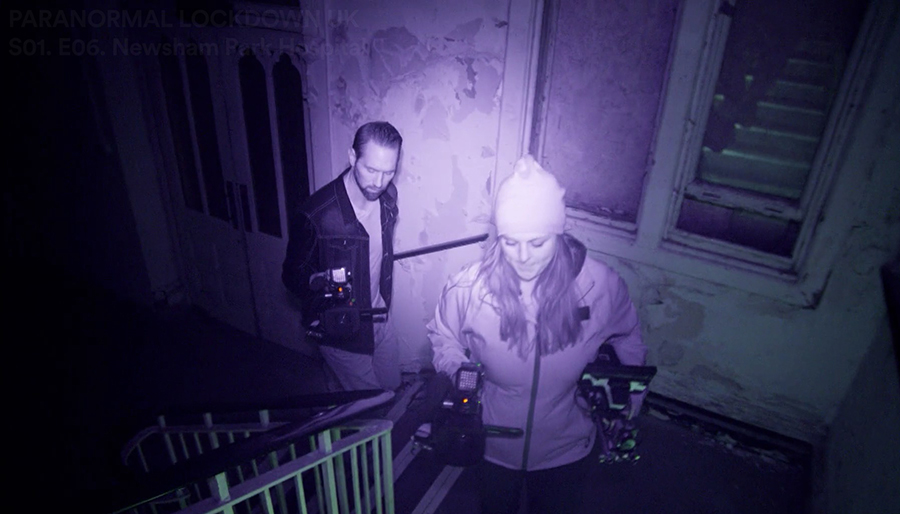 Once darkness fell, Nick and Katrina were locked inside the foreboding building to begin their investigation. Starting in the main hall, Nick pulled out his phone to use an app called EchoVox to try to make contact with the spirits of the hospital. The app randomly scans through a database of words and phonics, it's thought that spirits can manipulate the output to create an intelligent response. They also had a thermal camera set up to measure any hot or cold spots, extreme temperature changes are often connected to hauntings.
The pair weren't in the main hall for long, almost straight away they moved up to the punishment hall on the third floor. This area is said to be extremely haunted with something negative. As soon as Nick and Katrina got there, Nick thought he heard a noise and then moments later thought he saw something run across the hallway into one of the punishment cupboards. Sadly, none of this activity was caught on camera. They then heard a door slamming shut. Nick and Katrina suspected that the activity might be the result of playful kids.
Nick pulled out his app again and started calling out to the spirits and they heard the word "abused", although there wasn't really any context so it would be hard to class this as an intelligent or meaningful response.
On night one, Nick decided to sleep on a slab in the mortuary, he said "this is one of the worst spots I have slept in." Meanwhile, Katrina bedded down for the night in the punishment hall. Katrina, as always, seemed to have a quiet night, but Nick heard odd bangs and dragging coming from outside the morgue. The next morning he said, "I don't want to go back inside a morgue until I'm dead." 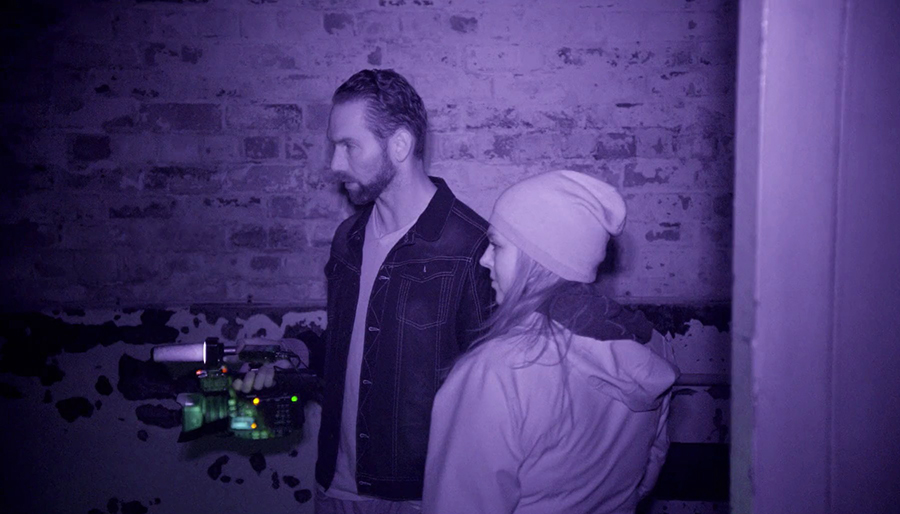 Nick and Katrina begin night two by focussing their investigation on the cellar, immediately Katrina is concerned after finding a homemade spirit board, but Nick got straight into it and set up an experiment. He was using a smoke machine to make a grid of lasers visible, he hoped that if anything broke the lasers, they'd be able to see it. Nick also places motion activated LED light panels on the floor and Katrina set up a camera which takes photos every five seconds.
They then started the experiment by calling out to the spirits and listening to responses on the EchoVox. They had some really good activity in the form of the light panel flashing as if something was passing over it. The flashes seemed to coincide with Nick's questions, but I wonder if more dense pockets of fog from the smoke machine could have triggered the device.
Katrina said that the light panels lit up "so distinctly that it's undeniable that this is an intelligent communication coming through." Then, suddenly through the app they heard the words "I lost my head", which might back up the story that historian Paul told the guys about a headless apparition. Katrina asked out, "how did you lose your head?" And a voice seemed to reply, which said "saw".
After the experiment the guys split up to sleep, Nick stayed in the basement for night two, while Katrina slept directly above him in the main hall. Katrina had another peaceful night and Nick's was much quieter than the previous. The next morning they went through the photos that were automatically taken during last night's experiment. Surprisingly they only had about 260, which means that at a rate of one photo every five seconds, the experiment only lasted about 20 minutes.
Nick says that in one of the photos you can "clearly see the outline of a figure manifesting," I was a bit surprised to hear him say this as there really was nothing in the photo other than the light from the LED panels defusing through the smoke above it. The shape the light makes doesn't look remotely like a figure, but Nick described it as "incredible". Katrina didn't seem as convinced. 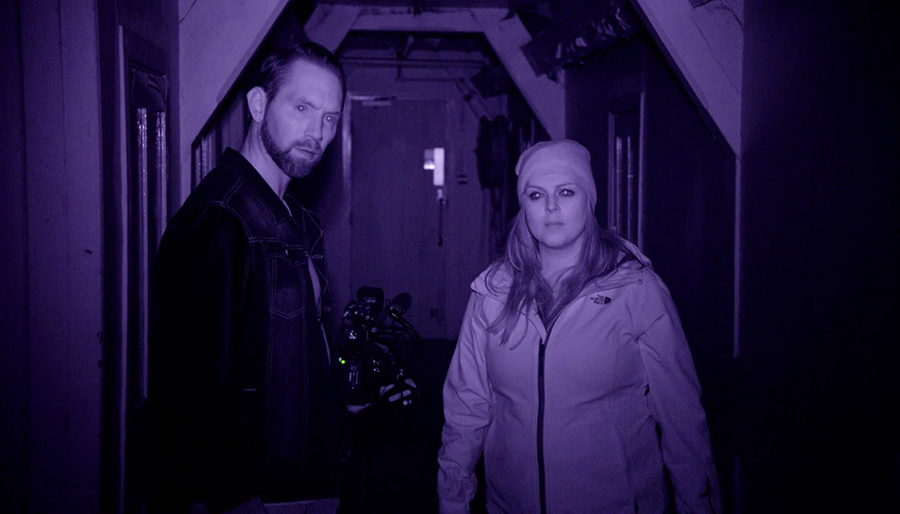 On the final night, Nick and Katrina investigate the punishment hall, armed with a Geo Port, another device used to communicate with spirits. They'd also set up another laser experiment, similar to last night's. Early in the vigil they hear a clear voice saying, "where's my daddy?" This was followed by a voice asking "can you see me?"
They then said they heard what sounded like kids feet running away, I couldn't quite make it out on my laptop speakers on the replay. Then moments later Katrina saw something break one of the laser beams, indicating the potential movement of a spirit. They then heard a voice through the Geo Port say "let me out".
As this is the area of the former orphanage where children were locked away in small cupboards as punishment, Katrina responded by saying "knock on the door and I'll let you out, which room are you in?" Seconds later they heard a loud and very distinct banging sound. Nick exclaimed, "holy s**t! That was loud as hell!"
They went to investigate the cupboard that the sound was coming from, but there was nothing to be seen there in the darkness. Before the vigil came to an end, they heard several other phrases, including "he's coming back". The next morning, after reviewing their evidence, their time at Newsham Park Hospital came to an end.
After their time in the hospital, Nick and Katrina came to the conclusion that the spirits that haunt the building aren't all as negative as others believe. Most of the entities they encountered were the sad and lonely trapped spirits of children. However, they did feel they had made contact with something dark and oppressive in the basement.
'Paranormal Lockdown UK' continues at 9pm this Thursday on Quest Red. Watch on Sky channel 149, Virgin Media channel 215 and Freeview channel 38, or on demand via QuestOD.
Tags:
paranormaltelevsionparanormal lockdowntopicalliverpoolnewsham park hospitalnick groffkatrina weidman