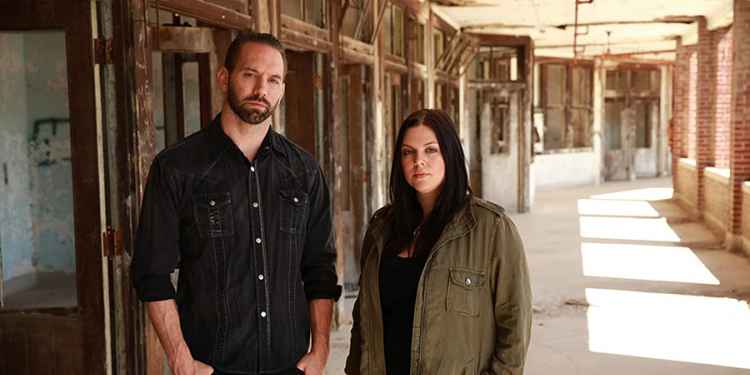 Really once again proves that their weekly Freakend schedule of paranormal entertainment makes them the go-to channel for fans of American ghost hunting shows, as they add the back catalogue of Nick Groff and Katrina Weidman's 'Paranormal Lockdown' to their Thursday night lineup.
Really viewers will be familiar to Nick and Katrina, as 'Paranormal Lockdown UK' is currently airing on the channel. The final episode airs this week, making way for the duo state-side adventures from the next Thursday, April 16th.
Here in the UK, the series is being billed as 'Paranormal Lockdown US', and although the show is new to Really, it actually pre-dates the current UK series and has previously been shown on Quest Red in the UK.
There are two seasons of the show, consisting of 26 episodes, which will air at 10pm on Thursday nights from April 16th. In each of the hour-long episodes, paranormal investigators Nick and Katrina spend 72 hours locked inside some of the most haunted places in America.
Throughout the series, the seasoned investigators visit some legendary haunted locations including, the Trans-Allegheny Lunatic Asylum - an enormous, abandoned and haunted facility in West Virginia.
Nick and Katrina also set out to document the elusive shadow figures lurking within the expansive corridors of Waverly Hills Sanatorium in Louisville, Kentucky, and they use high-tech equipment to face down the dark spirits in one of America's most notorious paranormal hotspots - Bobby Mackey's Music World.

We already know that there will be no further investigations featuring Nick and Katrina after it was announced last year that the series has been cancelled and the duo went off to work on separate projects.
Little detail was given about the decision, but in a video posted online Nick blamed television politics. He said, "I'm very passionate about the work I do, it's sad when politics get in the way of successful shows continuing on with little to no explanation."
Katrina has continued to investigate the paranormal, now alongside TV personality Jack Osbourne in 'Portals To Hell', a show which also aired as part of Really's Freakend in recent months. A second season of the show is currently airing in the US, and is likely to come to Really in the future.
'Paranormal Lockdown US' will air each Thursday at 10pm on Discovery owned Really channel from April 16th. It follows the new US series 'Ghost Loop' which kicks off the channel's weekly two-day #Freakend event at 9pm.
The network's ghostly offering continues from 9pm on Friday night with 'Destination Fear', and at 10pm repeats of recent 'Most Haunted' episodes. Yvette Fielding and the team are followed by 'Ghost Adventures', which has been pushed back an hour to 11pm, but viewers will be treated to a double bill of Zak Bagans and GAC.
You can watch all these shows on Really on your television in the United Kingdom and Ireland on Freeview (17), Sky (142), Virgin Media (129) and Freesat (160), plus YouView, BT TV and TalkTalk TV. Or watch previous episodes of #Freakend shows on demand on dplay.
Tags:
televisionparanormaltopicalparanormal lockdownnick groffkatrina weidman