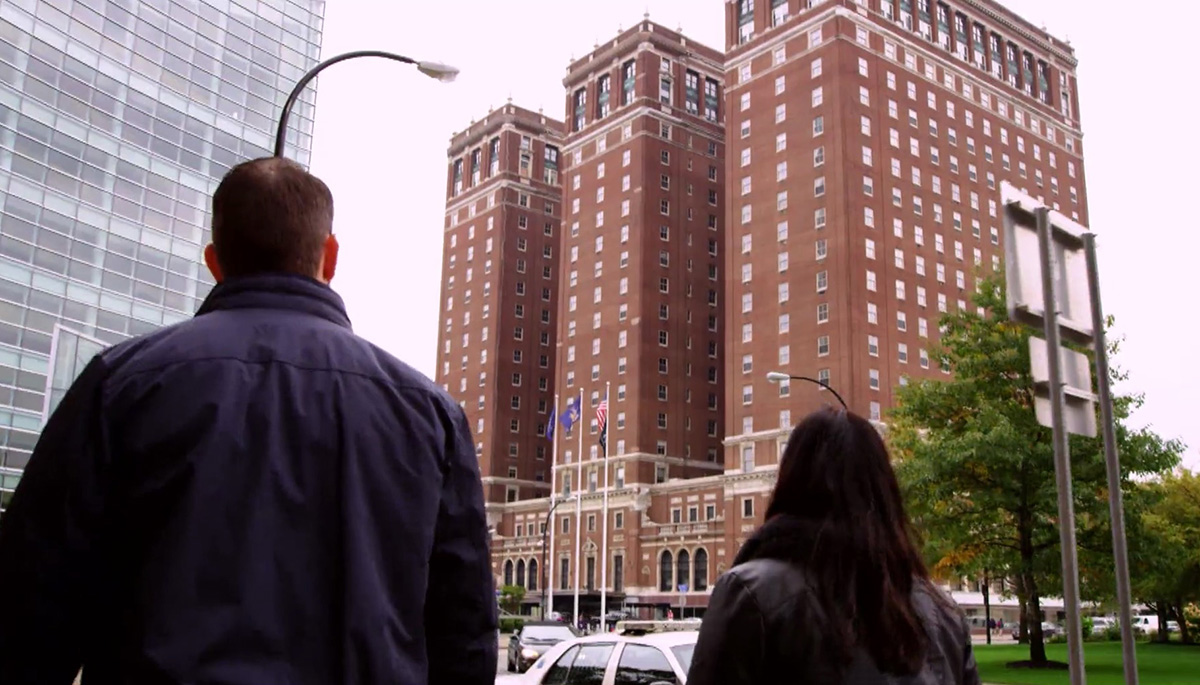 In their largest investigation to date, Nick Groff and Katrina Weidman brave 72 hours locked down inside the Statler City Hotel in Buffalo. They soon discover that the ghostly remains of the hotel's sordid underground history may have no intentions of staying buried.
Here in the UK, the series is being billed as 'Paranormal Lockdown US', and although the show is new to Really, it actually pre-dates the recent UK series and has previously been shown on Quest Red in the UK. This week Really brings us episode seven of the second season.
At the heart of downtown Buffalo stands the Statler City Hotel, a once vibrant luxury destination that was the talk of the town in the roaring 20s. Behind the 18-storey brick exterior, the hallowed halls that once held some of the 20th century's most notable figures are filled only with the ghosts of the hotel's sordid past. Built by Ellsworth Statler in 1923, Statler City was the crown in the jewel of his hotel empire.
The hotel has played host to such legends as Dizzy Gillespie, Bessie Smith and Coleman Hawkins played in the hotel's basement nightclub. US presidents John F Kennedy and Franklin Roosevelt both held closed-door meetings in the hotel. Even notorious mobster, Al Capone, was a frequent guest.
Most of the hotel has been abandoned for decades, although the two lower floors have been refurbished as an event space, but the hotel's dark past still lingers. Wedding guests were shocked to see a dark figure captured in the background of a photo, contractors have fled from an apparition roaming the upper floors, and a local paranormal group have recorded disembodied voices calling for help.
The hotel is the largest location Nick and Katrina have ever investigated. Upon arrival at the hotel, Katrina said "it definitely feels like I'm checking into a luxurious hotel instead of a terribly haunted location, but looks can be deceiving." 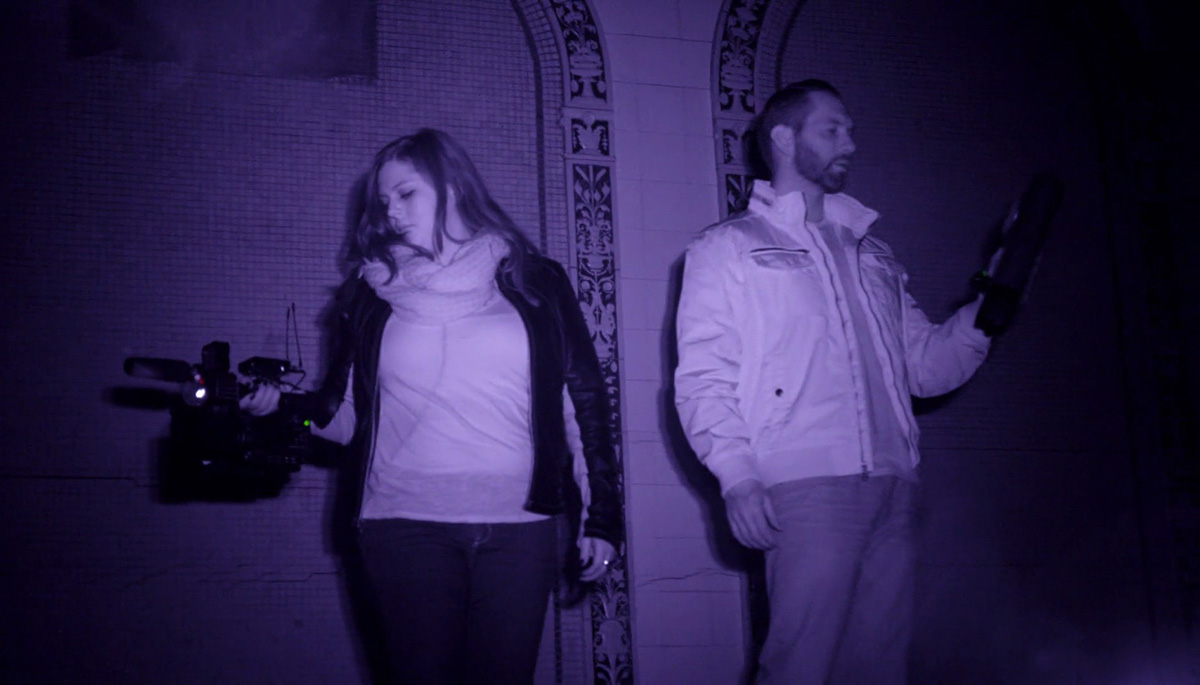 On the first night of their 72-hour lockdown, Nick and Katrina began their investigation in the huge Turkish baths in the basement. This eerie and dilapidated room proved active on their initial walk around and according to local paranormal investigator, Dan Klaes, a stone was once thrown here during an investigation.
Nick starts by using a Geoport, a device that monitors vibrations, radio waves and electromagnetic frequencies. It's thought that intelligent spirits can manipulate or use the device's sensors to relay intelligent responses in the form of words or sentences. They had a couple of words come through, but were distracted by a very loud bang.
They ran off to try to pin point the cause of the sound, but were unable to establish for certain where it had come from. As they called out to the spirits and encouraged them to make the sound again, they heard a sound coming from the Terrace Room above them.
They went to investigate the grand dining room, but found nothing was out of place. Katrina dragged a chair across the floor and found that the sound was identical to what they'd heard moments before from the basement.
On the first night, Katrina set up her bed in the Georgian ballroom - it is here that a mobster is said to have killed someone after a deal went wrong. Nick decided to sleep in the Turkish bath, but despite the earlier activity, he had a quiet night.
The next morning the pair resumed their investigation on the 8th floor where in 1947 a woman named Mary Jean jumped to her death from a window. Katrina called out "if you want us to leave can you give us three knocks?" They immediately heard three knocks in response.
Despite this being a clear and direct seemingly intelligent spirit response, the pair didn't use this method any further and instead switch to a different method. Nick was armed with a device that is said to be able to visualise spirits as well as allow them to communicate via a bank of phonetics by manipulating the device's atmospheric sensors. Other than a few garbled sounds, the device didn't produce any meaningful evidence.
Their second night was pretty uneventful. The only incident of note was when Katrina heard a moan in the Rendezvous Room, which sadly wasn't caught on camera. That night Nick slept in the ballroom, while Katrina slept in the Rendezvous Room where she'd heard the moan. 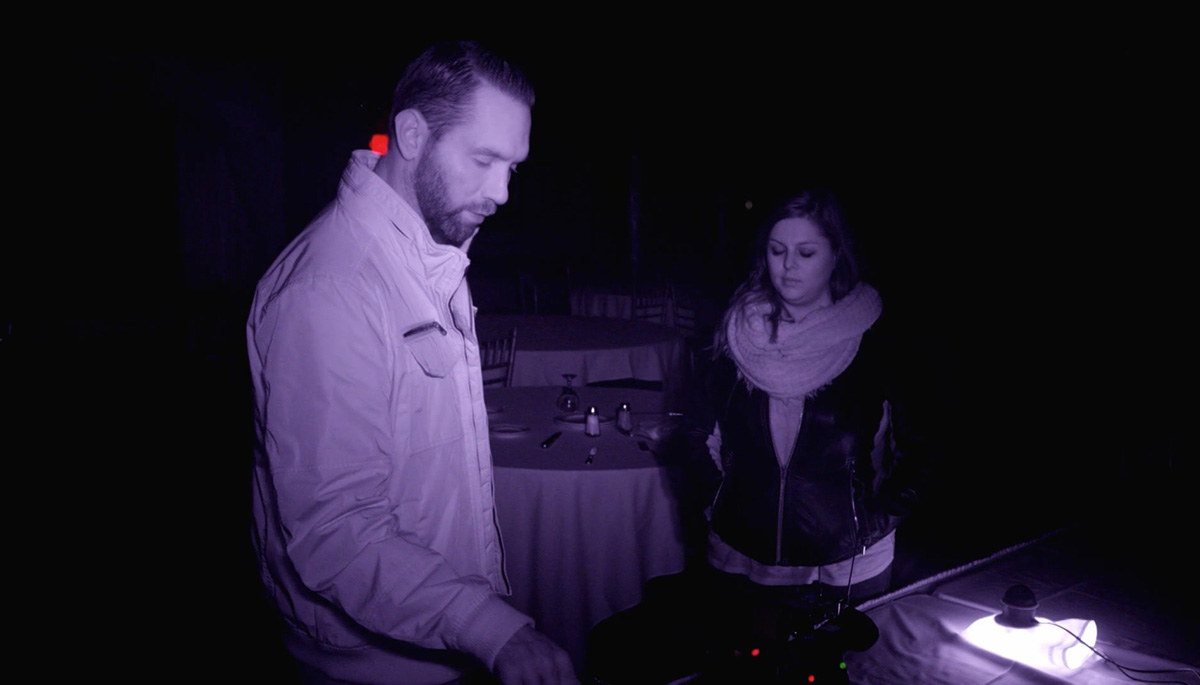 Although their second night had seemed quiet at the time, the next morning Nick reviewed the footage from a camera he'd left in the Terrace Room. To their surprise the camera had caught a chair moving.
That night Nick and Katrina used a ghost hunting app called Portal which was connected to a Wonder Box, a device created by Steve Huff of Huff Paranormal. They had several noises come through which sounded like voices, but the were mostly a bit conflicting and didn't really help the duo to progress the investigation.
They then split up. Nick remained in the Terrace Room, while Katrina went down to the basement pool alone. She soon heard rumbling coming from one end of the room and called for Nick.
Although they obtained very little evidence, three phrases that came through the Wonder Box were enough for Nick to put together an elaborate story that might be responsible for the hauntings. It involved guests at a party getting into a fight and one of them being killed in the meat locker.
'Paranormal Lockdown US' continues next week on Really as part of the channel's #Freakend event, bringing viewers three nights of paranormal entertainment every Thursday, Friday and Saturday.
You can watch in the United Kingdom and Ireland as part of the Discovery family of channels. You can watch Really on Freeview (17), Sky (142), Virgin Media (129) and Freesat (160), plus YouView, BT TV and TalkTalk TV. Or watch previous episodes on demand on dplay.