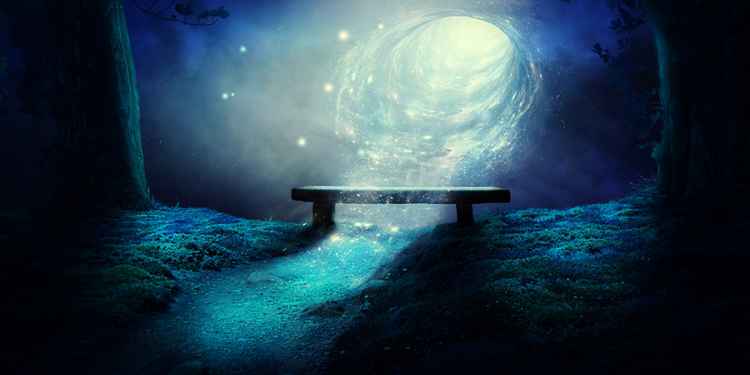 Photo: pixabay.com
In the paranormal world a portal is believed to be a gateway to another plane of existence. It links the physical world we live in to the plane of existence that ghosts and demons inhabit - the spirit world. A concept that was popularised in the classic supernatural movie, 'Poltergeist'.
Sometimes referred to as an energy vortex, or simply vortex, they allow spirits and other supernatural entities to pass through into our world and are therefore often blamed for an increase in paranormal activity. In fact cases of this nature are specifically referred to as "portal hauntings".
The idea of a portal to another dimension is nothing new, but there is a massive mix of opinions on what a vortex is, how it opens and how it behaves. Some say that a portal can open and close in the blink of an eye allowing something to slip through. Others claim that there are permanent active portals in their properties.
Their distribution is also disputed, some paranormal investigators think that the locations of portals are very rare and there are just a few in the world. Whereas some psychics think that every home has at least one portal in it. Some say there's a correlation between portal location and ley lines, with the claim that they are more likely to occur where ley lines cross.
Another common location for a portal to open is in a cemetery, even though most paranormal researchers believe that most cemeteries are not haunted, but over the years researchers have collected many anomalous photographs taken in graveyards. An explanation offered for this is that cemeteries become haunted because they provide access for spirits, or entities, to pass from one world to the next.
One belief is that portals most frequently form near a body of water, whereas others say that sources of energy such as power lines can cause a vortex to open. There are also links between portals and bridges, 'The Secret World Of Polly Flint' springs to mind.
Probably the most common belief is that mirrors can act as portals. The notion was popular in Victorian times and played upon in the séances of the time. Stories of mirrors attracting and containing spirits or even demons dates back even further, with countless tales being told for generations.
Perhaps the best known of these stories is the legend of Bloody Mary, a medieval witch by the name of Mary Worth. Her haggard face is said to appear in a mirror to those who call her name three times.
There aren't often reports of sightings of portals, they are more commonly captured in photographs as unexplained lights or miniature lightning bolts - almost like a glowing crack in the fabric of reality. There are also claims that certain sounds can be a sign that you are near a vortex, often a buzz or a hiss.
Although we can't see them, we can often get a sense that we are near a portal by observing its effects. This can include an area of unexplained low or high temperature, a feeling of increased energy, or even negative sensations including feeling weak, cold or disoriented.
Those with psychic abilities often claim to be able to sense the change in energy around a portal or report that their abilities are enhanced when in close proximity to an open vortex.
Portals don't just lead to the spirit realm, there's a growing number of claims that they could be inter-dimensional gateways or even doorways to a different point in time, either the past or the future. This is based on claims that objects and artefacts have fallen through portals. Items like feathers, arrowheads and ancient coins have been found in places where they have no business being.
Some researchers even believe that they could be doorways for otherworldly beings from another dimension and that ghost could be explained as beings living in one or more parallel dimensions. There's growing scientific support for the many-worlds interpretation, which suggests that there are one or more, perhaps an infinite number of complete universes co-existing with us on a plane we are not aware of.
Evidence of the existence of portals is rare and often consists of nothing more than streaks of light in photos, which leaves some doubting their existence. For many paranormal investigators the most telling sign of a vortex is the increase in paranormal activity at a location, which they attribute to the constant stream of paranormal energy coming through into our realm - but of course this is also hard to prove and quantify.
Witness accounts of near death experiences are also said to support the claim that portals exist. Those who've had NDEs recall passing through a tunnel of light from this world to the next - these could be a portal of sorts.
In the case of NDEs the portal seems to be pulling spirits away from our realm to the next, whereas in hauntings a portal allows ghosts to pass into our realm. This could confirm the theory that portals can be positive or negative. Positive portals, also known as "up-flow vortexes" allow entities to flow away from our realm. Negative portals, or "in-flow vortexes" allow entities to move into our realm.
Despite the lack of evidence, portals do seem to be seeping into mainstream paranormal investigations. This is evident by the title and premise of Jack Osbourne and Katrina Weidman's new paranormal series 'Portals To Hell', which sees them explore sites with sordid pasts and dark histories that are especially sinister and purported to be doorways to the spirit underworld.
Tags:
paranormalghosts