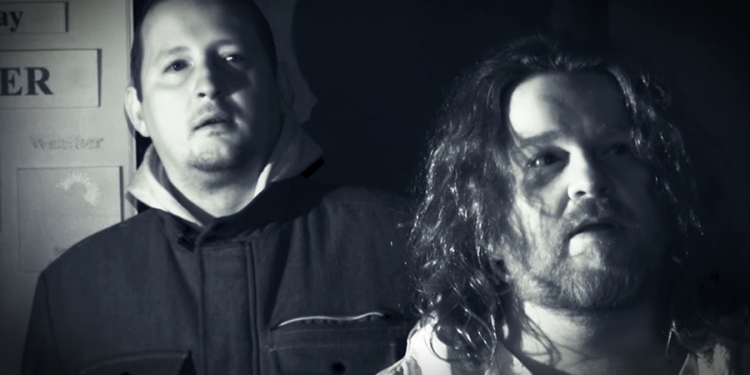 Photo: © Infinite Hermit
It's been almost three years since the last series of the ParaPod ended, but now comedians Ian Boldsworth and Barry Dodds are back with a new series to support the release of their new movie. The ParaPod Movie podcast starts Wednesday 19th February, 2020.
Since the last series came to an end, the duo have been working on a feature length movie. The project will see the ParaPod become the first ever podcast to transition into a feature film. To celebrate the release, the duo are whetting fan's appetite's with a brand new series of the Chortle Nominated podcast.
The ParaPod Movie podcast will see hardcore believer Barry once again go head-to-head with his skeptical friend, Ian - presumably across ten episodes as in the previous three series.
The first series of the podcast, which was released in 2015, revolved specifically around ghosts with Barry bringing a 'featured haunting' to each of the ten episode.s Across the series he talked about such legendary paranormal cases as 30 East Drive in Pontefract, Chillingham Castle and the Enfield Poltergeist, while Ian ripped the stories apart.
The pair returned in 2016 with a second series in which they debated some of the best-known mysteries of all time, including the legendary Loch Ness Monster, Slender Man, and the famous UFO incident at Rendlesham Forest. For the podcast's third series Ian and Barry focussed on conspiracies like chemtrails, flat Earth and the Moon landing. The series came to an end with a discussion about the Mandela Effect in March 2017.
This time round there is no theme across the series, other than the ongoing news and updates to build the excitement around the movie. The pair share some behind the scenes secrets in the first episode of the new series. Ian tells listeners, "the ParaPod movie has sprung from the original ParaPod series. It's a nearly-two-hour film. It's a documentary, where you [Barry] took me around lots of haunted places in the UK in an attempt to once and for all confirm to me the existence of the paranormal, and what happened on that journey."
Don't expect too much detail about what happened on their journey, as the content of the movie is still a closely guarded secret to avoid spoilers, but they do talk about certain aspects of the movie making process and about scenes that ended up on the cutting room floor.
They discuss one such scene in episode one, as it was one of the more bizarre experiences they had while filming the movie, which involved meeting a man named Patrick in a forest at night. According to Barry, Patrick had invented a device called a Parascope that could call forward higher beings in order to make a haunting occur right in front of your eyes.
Also in episode one Barry and Ian talk about teeth and gravity blankets, and Ian tests Barry's knowledge of the six times tables... but they do eventually get on to paranormal matters. In an attempt to bring the themes of the previous three series together, Barry tells Ian his version of the story of Titanic's maiden voyage.
Not only does Barry claim that the fate of the ship was pre-determined by a conspiracy, but also tells us about a related haunting at the British Museum, and the mystery of an Egyptian curse that he also says might be linked to the steamship sinking.
The first episode of the new series was released exclusively to Ian's Patreon backers ahead of its general release and it included an additional 25 minutes of audio. Ian will also be giving backers early access to future episodes, you can get access to this exclusive content by joining Ian on Patreon.
The ParaPod Movie has already had its premiere at a sell-out screening in London's glitzy Leicester Square. From March the movie goes on tour to a limited number of cinemas across the UK. Tickets are selling fast, but don't worry, more dates will be announced soon.
For more details on these screenings and for more dates as they are added, check theparapod.com.
Full details of the movie's release have not yet been announced, but there's been unconfirmed talk of a limited Blu-ray release, the possibility of making the film available as a digital download for a limited time, and most likely will end up being available on a streaming service like Netflix, Amazon Prime or Vimeo.

To make sure you don't miss out on announcements of new screening dates, and news on digital releases and streaming, make sure you follow @theparapod on Twitter for the latest information.
That'll keep you up to speed, but if you want to stay ahead of the curve and become part of an exclusive crowd that gets the news and podcast episodes first, the best way to make sure you don't miss any updates is to join Ian's Infinite Hermit Patreon page. You can get access to these updates, exclusive previews, sneak peeks, and deleted scenes from The ParaPod Movie by supporting his work for as little as $1 a month.
You can also keep up with the latest news on the ParaPod Movie here (although normally a few weeks behind Patreon).