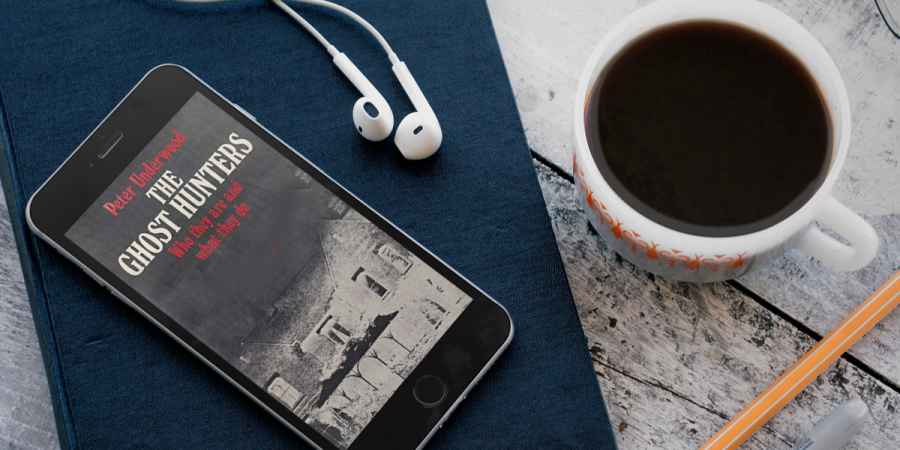 Are you looking for your next paranormal themed audiobook to listen to on Audible? We've handpicked a selection of worthy parapsychology books aimed at paranormal investigators, from the work of legendary Peter Underwood, to Prof. Richard Wiseman's quirky look at the science of the paranormal. 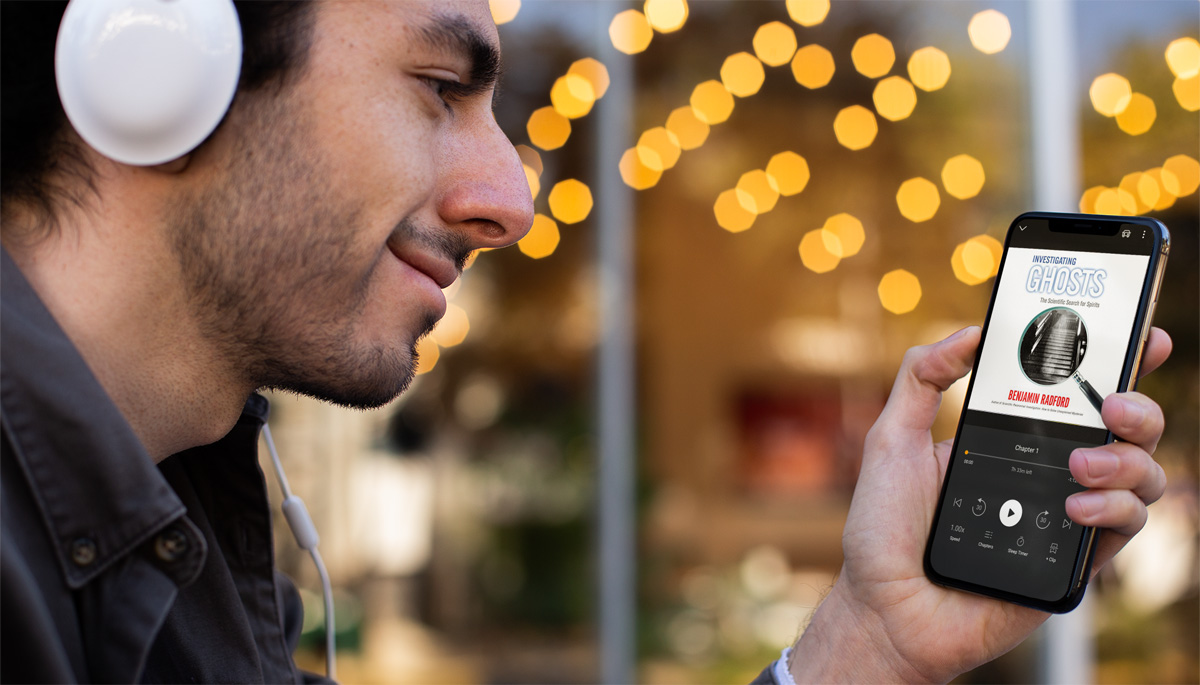 Benjamin Radford's self-narrated audiobook, 'Investigating Ghosts: The Scientific Search For Spirits' isn't about debunking paranormal claims, but trying to communicate the importance of using balanced and measurable investigative techniques to ghost hunters. It's fair to say that Radford's reading of his book isn't perfect, he stumbles over his words a lot and lacks diction in some places, but the content of this award-winning and balanced guide on how to research ghosts is excellent. The book is based on almost two decades of Radford's own first-hand, science-based investigations, research and experience as the deputy editor of Skeptical Inquirer magazine. Radford doesn't just critique ghost hunting methodology and why a scientific approach is so important, but also discusses the psychology behind why people believe what they do in the face of overwhelming evidence to the contrary and discusses what evidence would be required to prove once and for all that ghosts exist. Radford also touches on the mistakes made  by teams in television shows, including 'Paranormal Lockdown' and 'Kindred Spirits'.
» Listen now on Audible 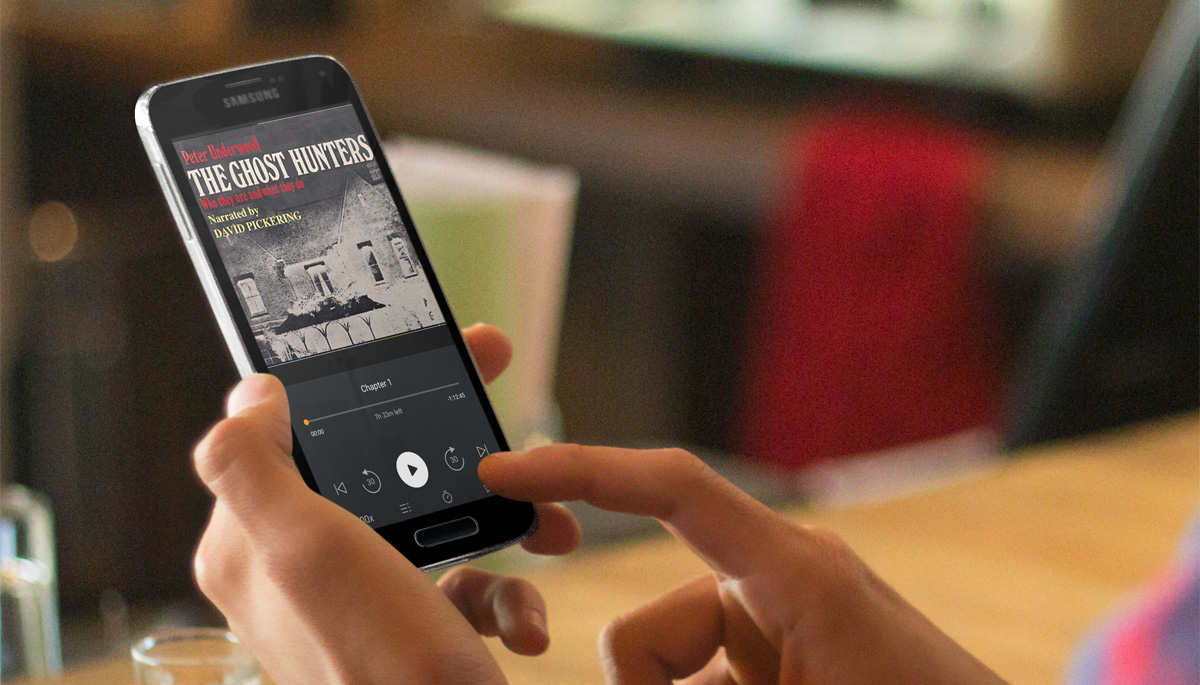 David Pickering narrates this classic Peter Underwood book from 1985, 'The Ghost Hunters: Who They Are & What They Do'. Underwood explores the varying techniques and approaches to ghost hunting employed by famed paranormal investigators including the legendary Harry Price and his 20-year examination of Borley Rectory, Hans Holzer, Tom Perrot and John Cutten. Plus Prof. Hans Bender of Freiburg University and the redoubtable Mrs K. M. Goldney, MBE, whose remarkable experiences and revelations span half a century. Along the way he uncovers some notorious fakes, and reveals many remarkable mysteries for which no material explanations can be found.
» Listen now on Audible
» Explore more Peter Underwood audiobooks 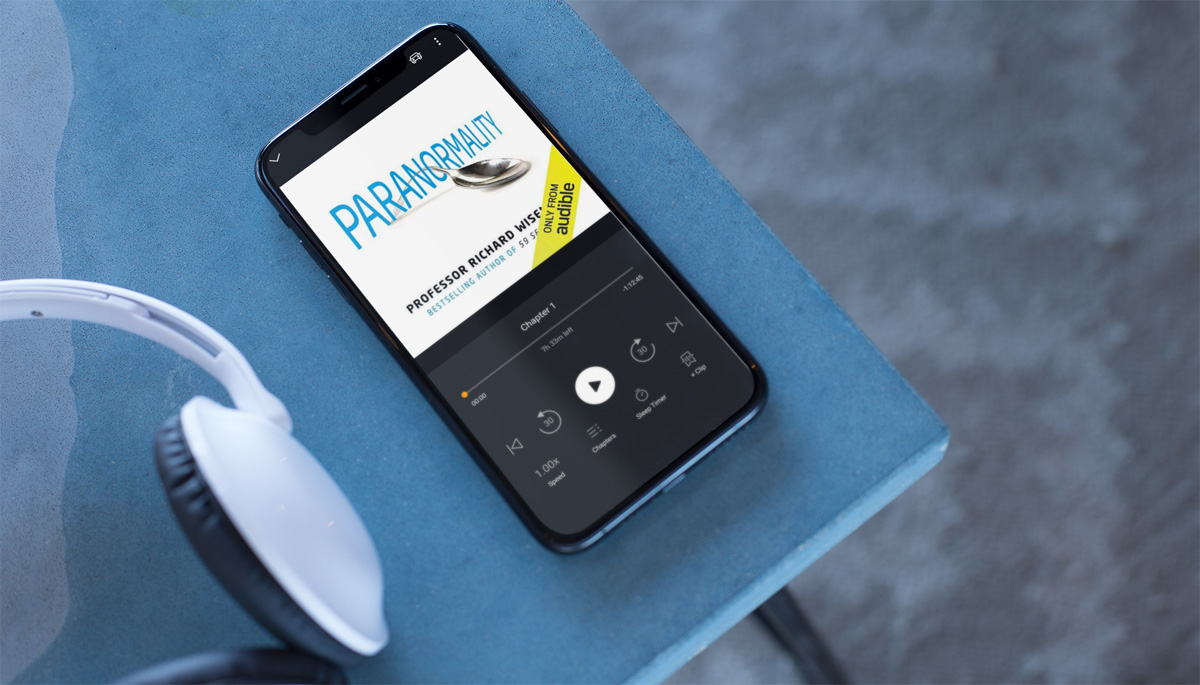 The Audible version of Richard Wiseman's 'Paranormality: The Science Of The Supernatural' is narrated by Peter Noble. It was written in an easy to digest style, with the odd bit of tongue in cheek humour, the 2012 book is based on Wiseman's career in parapsychology and draws on famous psychology experiments conducted throughout the history of parapsychology. The book covers everything from cold reading psychics, to the human tendency to accept pseudoscientific nonsense. The book explores claims about Ouija boards, table tipping, automatic writing, and how ideomotor motion is involved in all of these things. The book touches on the work of James Houran, Tony Cornell, Alan Gauld, Vic Tandy and Michel Pernsinger, covering everything from infrasound and electromagnetism to the power of suggestion.
» Listen now on Audible 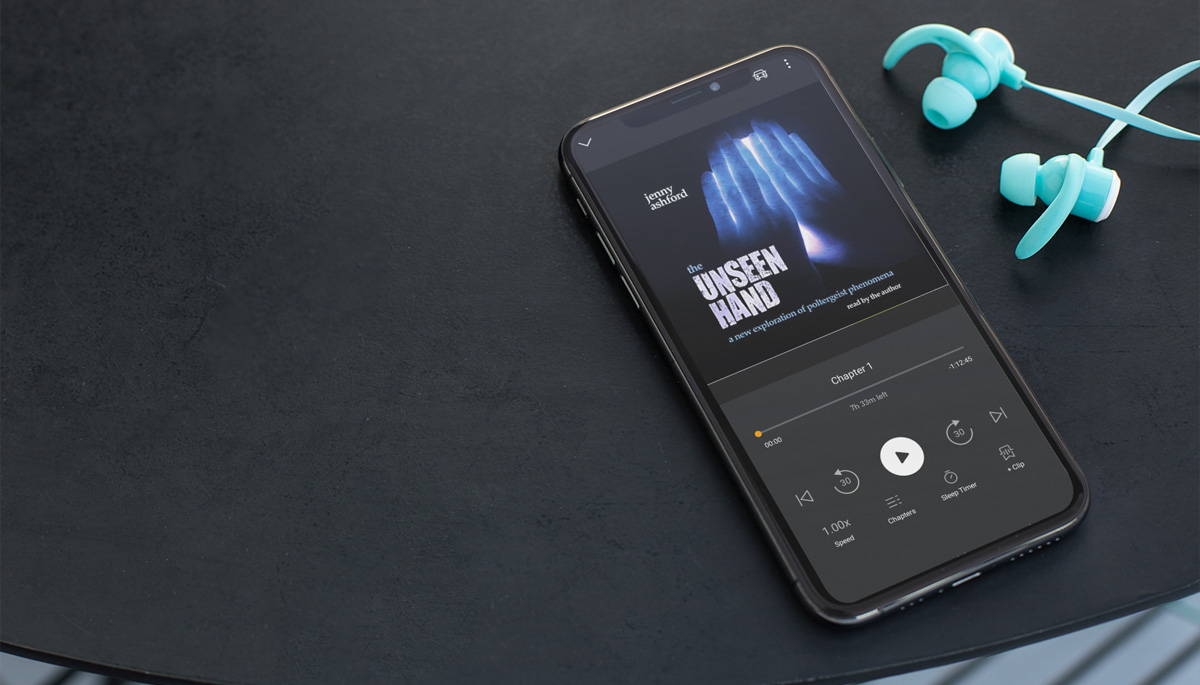 The symptoms of poltergeist activity are well known, but what is a poltergeist, really? This is the question Jenny Ashford attempts to answer in 'The Unseen Hand: A New Exploration Of Poltergeist Phenomena'. If you're interested in poltergeist hauntings, then research tools don't come much better than this 2017 book. Although sold as a new exploration of poltergeists, the book is actually at its heart a comprehensive collection of well over one hundred historic cases of poltergeist disturbances, many of which are hundreds of years old.
These case summaries are a useful reference, but they offer very little to the field of modern day research, since details have been lost over time, the incidents are anecdotal and there's no way to validate them not having been there at the time. The stories are useful for defining the nature of an alleged poltergeist case, but this does mean the book gets a little bit tedious and repetitive to listen to as many cases were very similar in nature.
Ashford narrates the audiobook herself, which does mean it has some jarring pronunciation errors, especially when it comes to English place names, of which there are many due to the large number of historic poltergeist cases taking place in the UK. This title perhaps works better as a traditional book, which the reader can selectively flick through to research specific cases.
» Listen now on Audible 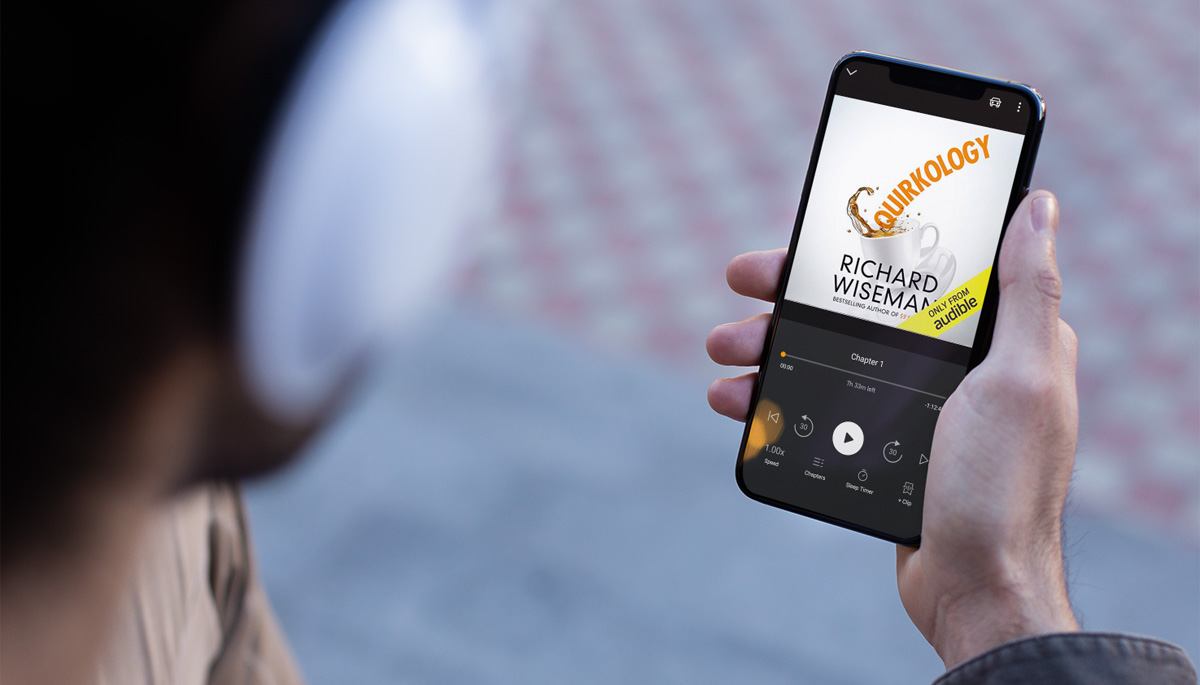 Before 'Paranormality' there was 'Quirkology: The Curious Science Of Everyday Lives', also narrated by Peter Noble, the book is less about the paranormal but there's a lot of overlap as Wiseman examines the quirky science of everyday life, dealing with everything from astrology to lying, plus fake séances, whether Friday the 13th is really unlucky, and the truth behind haunted houses. Wiseman's research has involved secretly observing people as they go about their daily business, and conducting unusual experiments in art exhibitions and music concerts.
» Listen now on Audible 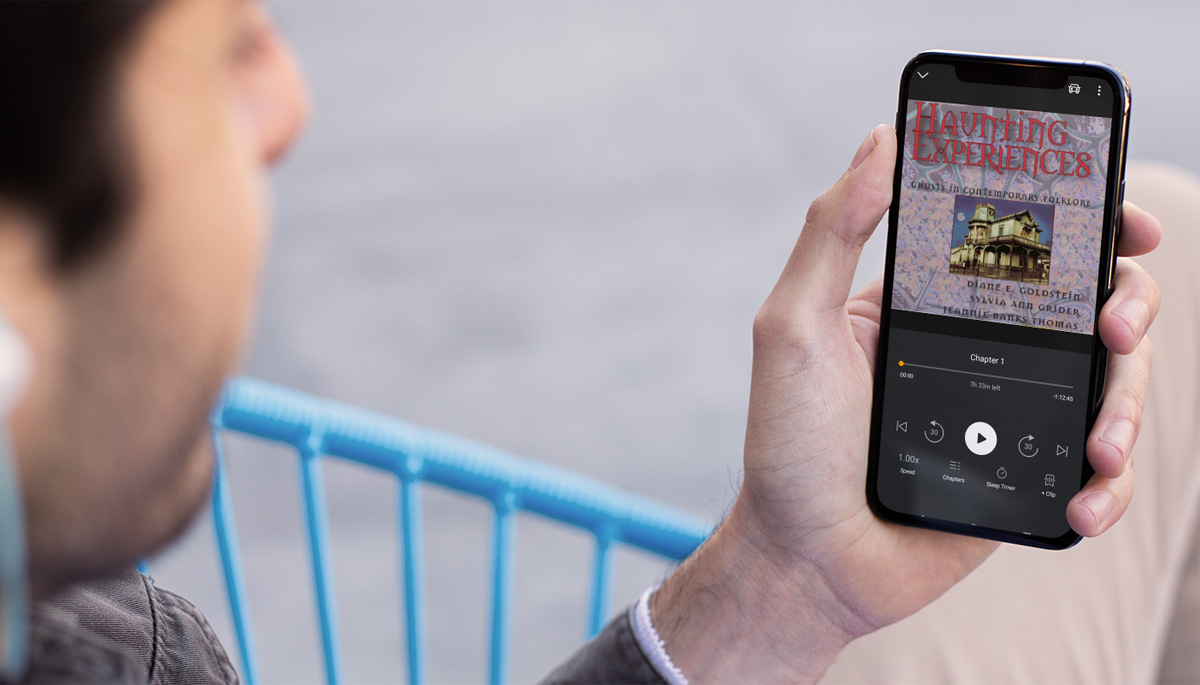 Narrated by Cynthia Wallace, 'Haunting Experiences: Ghosts In Contemporary Folklore' by three well-known folklorists, Diane Goldstein, Sylvia Grider and Jeannie Banks explores the supernatural entities and phenomena that are widely represented throughout modern culture. They can be found in any number of works of entertainment, commercial, and other contexts, but popular media or commodified representations of ghosts can be quite different from the beliefs people hold about them, based on tradition or direct experience.
» Listen now on Audible
Tags:
booksentertainment list