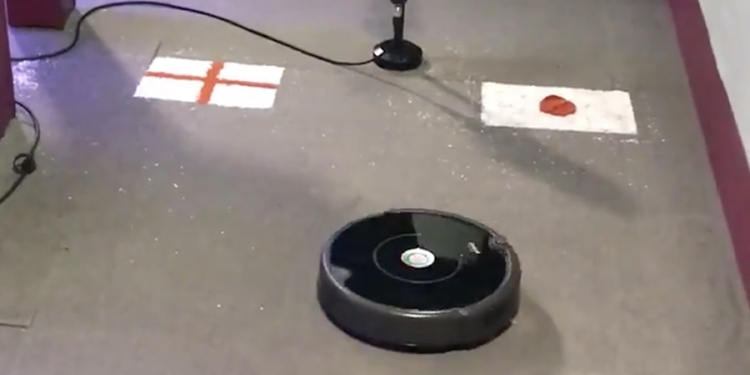 Photo: © BBC Radio 1
In 2010 Paul the psychic octopus correctly predicted the outcome of several World Cup games and in 2014 it was Shaheen the camel making the predictions. This year, as the England team have been edging closer to the semi-finals of the Women's World Cup, it a psychic hoover who's been making the predictions.
Alan the Robot Hoover has appeared on BBC Radio 1's Breakfast Show over the last couple of weeks and has scored a hat-trick of accurate football prophesies. Host, Greg James, has been getting the automated cleaning gadget to predict the outcome of the games by sucking up the flag of the losing team from the studio floor.
Greg first put Alan the Robot Hoover to the test before England played Japan on May 19th. The English and Japanese flags, both of which are red and white, had been drawn on the studio floor using a combination of salt and paprika. Then the hoover, which is owned by newsreader Roisin Hastie, was let loose.
Gregg and Roisin cheered with excitement when Alan the Hoover took a swipe out of the Japanese flag, sucking up salt and a little paprika as he did. Roisin said, "I'd say that was a clear result, he went straight for Japan. There's only half a flag there now." Which meant that Alan had predicted a win for England's Lionesses.
It turns out that Alan was right and England notched up a 2-0 win against their rivals.
The following weekend Alan was at it again, this time predicting the outcome of England's game against Cameroon. As the rival's flag is a little more colourful than Japan's, the Radio 1 team added some ground ginger for yellow and some parsley for the green to complete the design.
Once again, Alan was let loose to make his prediction by sucking up the loosing team's flag. The robot hoover correctly foresaw that Cameroon were going to be knocked out with a 3-0 defeat, putting the Lionesses through to the tournament's quarter finals, where they'll face Norway.
On the day of the quarter final game, England and Arsenal player Alex Scott phoned into the show from Le Havre to assist Greg as Alan made his third prediction.
Alex excitedly listened as a seemingly unsure Alan spun around in the middle of the studio floor, before rolling closer to the English flag and the Norwegian flag, which was made from salt, paprika and peppercorns. After a bit of uncertainty, the robot eventually clipped the corner of the Saint George's Cross before completely taking out the Norway flag.
Greg took this to mean another win for England, "the truth of it is, he was going for England and then he deviated at the last minute. So, I think what that might mean is it could be close."
Later that day, the Lionesses were back in action in Le Havre and for a third time Alan's prediction came true. The England team had an easy win against Norway, putting them through to the semi-final in Lyon on July 2nd, where they will face either France or the US.
Listen to Greg on Tuesday morning from 6:30 on BBC Radio 1 to hear Alan's next prediction.