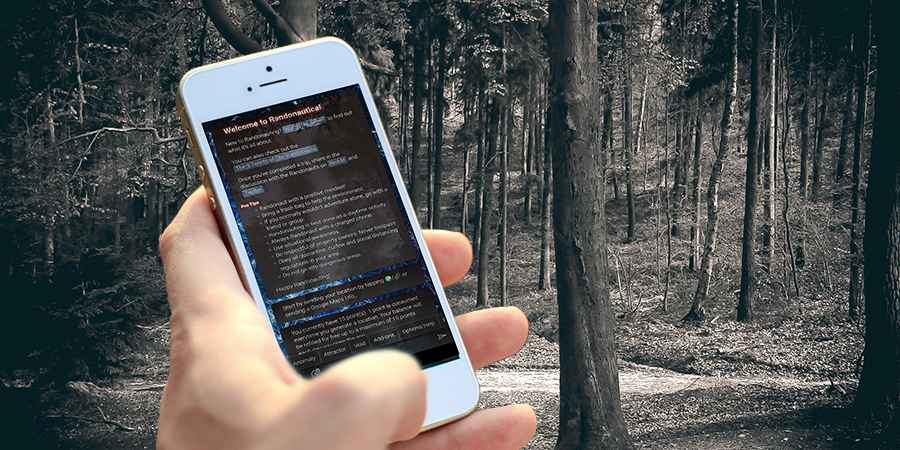 Randonautica is an app that sends you on an adventure to a random set of GPS coordinates that are generated with your intentions in mind. So if your intent is to uncover proof of the paranormal then you will be sent on a trip somewhere near your current location which will end with creepy consequences, or at least that's what its makers claim the app can do.
Randonautica, which has been available for iPhone and Android since February, can look a little confusing at first glance, but essentially once you get into it, it's just a random location generator wrapped up in a bit of myth and pseudoscience.
The app has lead those who play the game, known as Randonauts, to some bizarre finds. Everything from a pile of human poo to human remains in a suitcase, but with more than 10 million downloads of the app there is a statistical likelihood that some user somewhere will encounter these things.
However for some the game, which has been described as dangerous, is a way to track down paranormal activity. This can be done by setting a clear intent and following the directions based on random quantum points.

Photo: pixabay.com
The app claims to point users to a random location where there is either a high or low density of quantum points, depending on what the user has selected. So, does this mean that quantum points really exist and that they've been mapped or are detectable?
The term "quantum point" is a little misleading since the app actually gives you three methods of random number generation and only one of them uses quantum information as a source of entropy. So calling these locations quantum points is actually inaccurate.
Furthermore the app claims that it detects quantum points in your area. This is impossible. Your phone doesn't have any technology built in that would allow the detection of a point nearby of any kind. It's simply a point based on a random number, although it's not quite that simple.
The thing to remember is that it's not actually a quantum point that the app is directing you to. The location it gives you is merely based on the distribution of these points. The app lets you choose exactly how it generates the coordinates in three main ways, either as an attractor, a void, or an anomaly.
Attractor: A location in an area with a high concentration of quantum points
Void: A location in an area with a low concentration of quantum points
Anomaly: The app looks at the distribution of quantum points and picks a location where there is an unusual pattern, this could be high or low concentration
What's actually happening is that the app plots a series of random points near you. While this process is taking place the app asks you to focus on your intent. So you might think about discovering wealth, a new hobby, a peaceful place, or even something paranormal. The idea is that your intent, your thoughts, can change the random distribution of these points.
Setting an intention is something that witchcraft practitioners will know all about. When performing a spell or ritual they will always try to set a clear and powerful intent. In the case of this app, it's said that if your intent is strong enough you may be able to influence the random nature of the number generator and affect its outcome.
Once the app has plotted these points it then looks to generate some coordinates based on the instructions you've given it. Statistically there should be an even distribution of points across the map, but they app is looking for areas where you may have managed to influence the distribution with your intent.
If you've requested an attractor, then it will look for an area with an unnaturally high concentration of points. If you've request a void, then it will look for an empty region of the map. An anomaly is an area where the app detects an unusual patten of points, which again could indicate that the user's intent has affected the spread of points.
There's also one other mode of operation called pseudo. This option will randomly select a coordinate without plotting points on the map first. Of course there's still the possibility to potentially influence this random position, but rather than dealing with the distribution of multiple points, you're just focusing your intent on one. 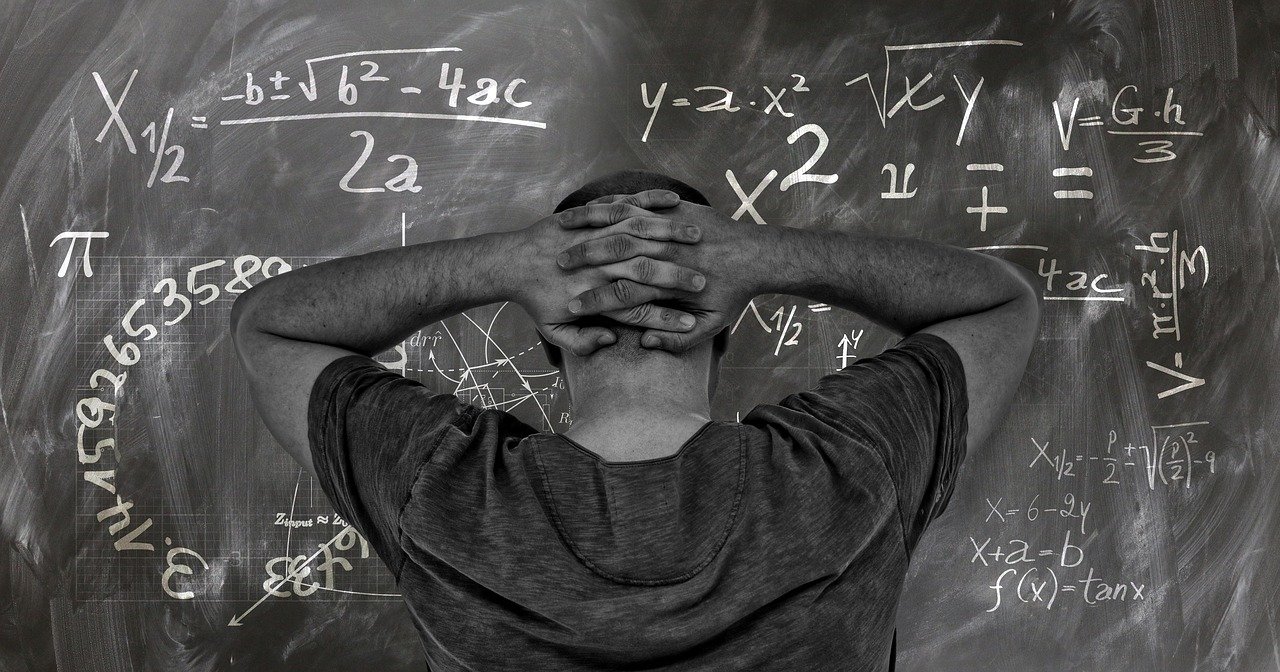 Photo: pixabay.com
Well, this is the big question and there's no simple answer. It's known as direct mental influence or Micro-PK, the PK referring to psychokinesis.
The idea isn't new, there have been plenty of studies conducted over several decades by parapsychologists and even the CIA to ascertain whether this is possible or not. Including a well-documented study conducted at Princeton University's Princeton Engineering Anomalies Research (PEAR) laboratory.
The study found clear and highly significant evidence that human consciousness and intention can affect the behaviour of random number generators. Although as you might have guessed, there were some issues with the experiment, including doubts over whether the numbers generated in the experiment were truly random to begin with.
Why not test this theory for yourself with our random number generator. Tap the button to start and while the app counts down it will be generating ten random numbers in the background. Make your intent clear and concentrate on a number between one and ten. Once the countdown is complete ten random numbers will appear on the screen.
If one of the generated numbers matches your choice then this is no better than statistical chance, but if two or more results match your number then this is much stronger evidence. The numbers will be being generated by your own device rather than our server, which should make it easier to influence the outcome.

How Are Quantum Points Randomly Selected?

The language used to describe Randonautica and the terminology used in the app itself is loaded with misquoted pseudoscientific nonsense to make the app sound magical and mystical. This is especially true of Randonautica's use of the term "quantum points" and the repeated use of the word quantum.
It is true that the app gives users the option of using a third-party random number generation service developed by the Australian National University. The real-time random number generator is able to produce truly random numbers by measuring the quantum fluctuations of a vacuum. The app then uses an algorithm to convert the number into nearby GPS coordinates, which is called quantum points.
However, the fact that ANU's random number server works on a quantum level doesn't mean there's anything "quantum" about the numbers it generates. The fact it makes measurements on a quantum level is irrelevant. A quantum random numbers server doesn't generate a quantum number, it simply generates a number like any other.
Since the dawn of computing, random numbers have been generated in countless creative ways using everything from the movement of a user's computer mouse through to variations in cosmic background radiation. The way in which a number is generated doesn't change the nature of the number you generate, just how random it is.
The web-infrastructure company Cloudflare have a novel way of generating random numbers for their secure encryption keys. At their headquarters they have a camera pointing at a wall of lava lamps, the combined movement of these psychedelic lamps produces a truly random input.
In random number generation systems this external information used as a seed for a random number is called an "entropy" source, a word which is used frequently in Randonautica. The app gives you three sources of entropy:
ANU: The Australian National random number server, this is a true random number.
Temporal: A time-based random number generator, this won't be a true random number but a pseudo-random number, something commonly used in all sorts of software, it is most likely generated by your phone itself.
Camera: The app also allows you to use your phone's camera as a source of entropy, like in the example with the lava lamps. This method should also give you a true random number.
Logically you'd assume that if thought can influence random numbers, it would be easier to do if the number was being generated by the phone in your hand than a server in Australia, so temporal or camera might actually be the better options to try.

Can Randonautica Really Lead You To Paranormal Activity? 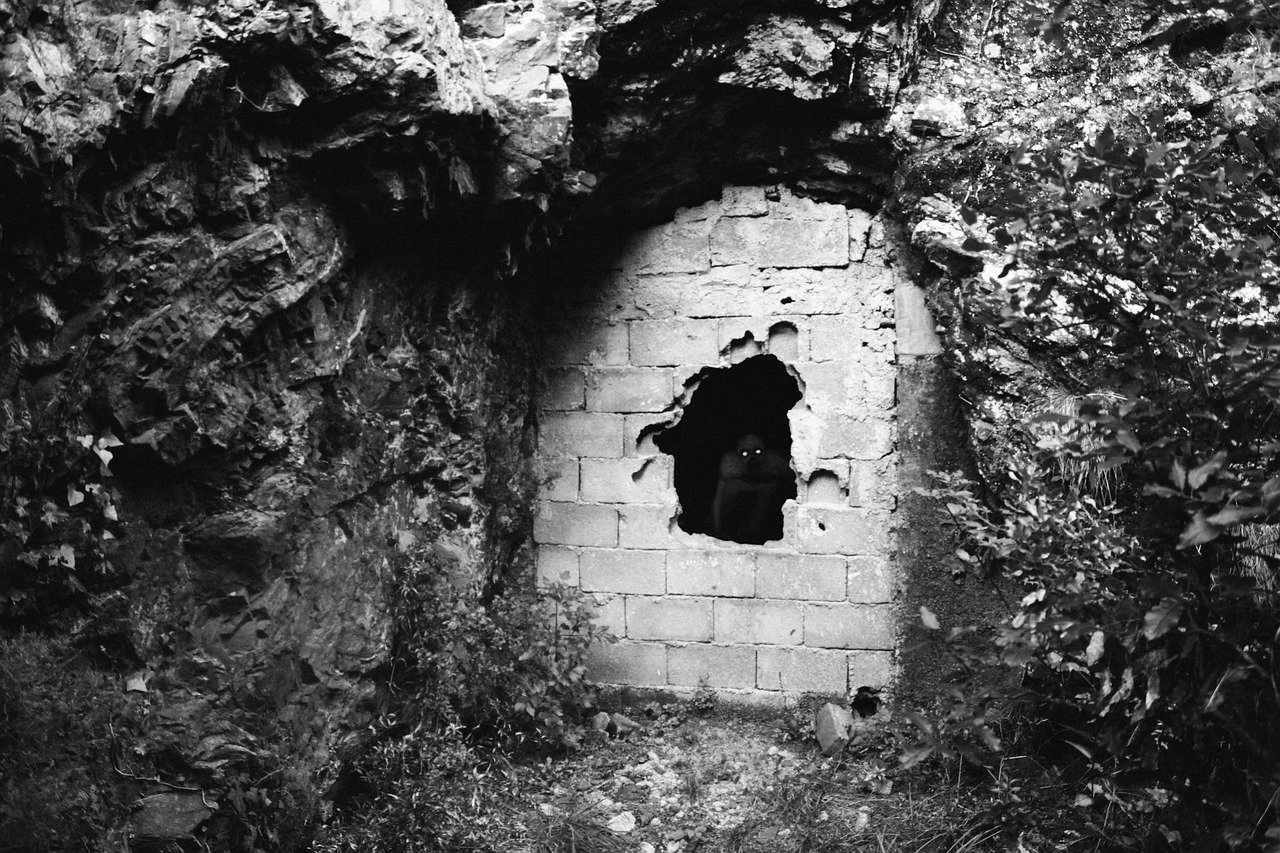 Photo: pixabay.com
Randonauts around the world who have shared their experience with the app online have been taken to some pretty creepy locations and situations. So much so that you might be wondering if it is possible that a simple app has developed a way to send you to whatever you wish it to, even evidence of ghosts and paranormal activity?
Well, you need to make a few leaps of faith first. You obviously need to believe that ghosts exist, and you need to believe that you either have micro-PK abilities that will allow you to manipulate the app's random nature, or that the universe rewards the power of intent.
The truth is, if a video looks too good to be true, then it probably is. The overwhelming majority of paranormal Randonautica videos shared on TikTok and YouTube are staged fakes, or at best happy coincidences that the creators have passed off as paranormal.
A lot of the content creators online who use the app don't just have one go at this. They'll declare that their intent is to find something creepy, but on the first attempt they'll find nothing out of the ordinary at the generated coordinates. So, they'll try again, and again, and again...
Eventually they will stumble across something that can be made to fit their intent, perhaps a cave, a discarded item on the floor, or some menacing graffiti. If you are looking for something creepy you will make it fit and you'll ignore all the initial failures and deem your last attempt to be a success.
Think about it this way. If you left your home every day with the intention of finding a feather on the ground, for days on end you'd probably fail, but because you are specifically looking for a feather you will eventually find one. You may attribute this find to your intent and conclude that you have been successful.
In reality, you may have failed several times and if you weren't looking for a feather you wouldn't have found it. The same applies to the creepy places that Randonautica sends its users to. Most of the time there is nothing creepy there, but occasionally the user will conclude that what they've found is creepy simply because that's what they're looking for and hoping to find.
The other thing to remember is that with more than 10 million users, pretty much every possible outcome will happen somewhere to someone eventually, whether that be finding a pile of poo or a dead body.
Tags:
paranormaltopicalapps