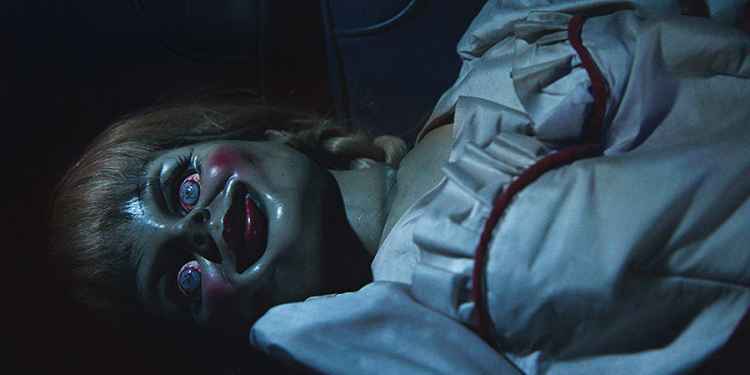 Warner Bros. have confirmed a release date for the latest movie in 'The Conjuring' universe, the third Annabelle instalment will be released on June 28, 2019.
The as yet untitled Annabelle film, is the sixth in the universe overall, but the third in the Annabelle franchise and follows on from the 2017 origins movie, 'Annabelle: Creation' and serves as a direct sequel to 2014's 'Annabelle'. The instalment was originally due for release in July, but has been bumped forward

The #Annabelle3 release date has been moved from a July 3rd to June 28 of this year. Who’s excited? pic.twitter.com/rfd0g9zpX3

The supernatural horror film will bring the cursed doll's story back in line with the main universe's plot, which revolves around husband-and-wife paranormal investigators Ed and Lorraine Warren, who will once again be portrayed by Patrick Wilson and Vera Farmiga.
The movie's producer, James Wan, has stated that this instalment continues where the first Conjuring movie left off, with Ed and Lorraine taking the Annabelle doll home to their paranormal museum, where she is stored in a glass cabinet alongside many other haunted artefacts.
It seems that the doll will awaken the evil spirits trapped within the Warrens' other haunted memorabilia and Annabelle herself will fall into the hands of the couple's ten-year-old daughter, Judy. This time around Judy will be played by McKenna Grace, she replaces Sterling Jerins, who played Judy in the first two Conjuring films.
The movie is directed by Gary Dauberman, making his directorial debut, with the screenplay by Dauberman and the story co-written with James Wan, who also produced the film with Peter Safran.
This new Annabelle movie isn't the last we'll hear from 'The Conjuring' franchise, there's already several movies in production including 'The Conjuring 3' which is due for release in 2020. The movie is thought to be about the story of Arne Cheyenne Johnson who killed his landlord in 1981. The case was the topic of the 1983 book, 'The Devil In Connecticut'.
The Annabelle doll was the first character from The Conjuring universe to become a title character in her own spin-off series, but Valak the demonic nun became the subject of the 2018 spin-off, 'The Nun'. There's also another spin-off in the works based on the Crooked Man character from 'The Conjuring 2'.
Tags:
paranormalmoviesconjuringhorrortopical