Does Jordan Peele's 'Us' Live Up To The Hype? 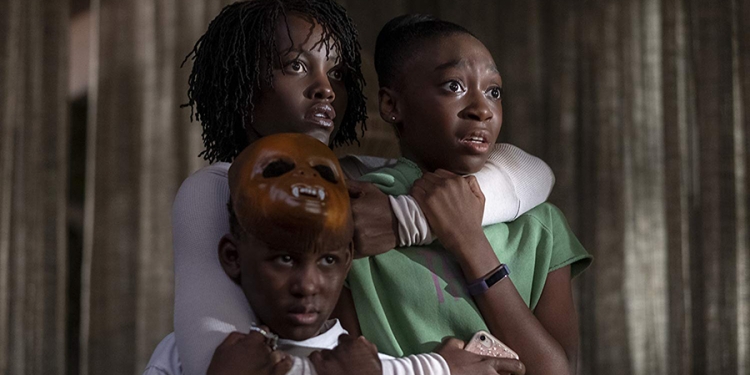 Having just got home from the cinema feeling slightly disappointed by Jordan Peele's new, much-hyped horror movie 'Us', I took to IMDb and Rotten Tomatoes to read the reviews and see if others felt the same way.
I was surprised to see pages and pages of 10 out of 10 reviews, but every single top-rating review consisted of nothing more than a few words. They were all vague, unhelpful and said things like "all star and talented cast and amazing story. Peele sets the bar high" or "Jordan Peele has done it again! Is there no stopping this man?" Clicking on the names of these reviewers takes you to a profile where you'll see they've only ever reviewed one film... 'Us'.
The only reviews with any real content, genuine thoughts and constructive views are the ones which rate the movie honestly, which means giving it less than full marks because that's what it deserves.
In fact, a large number of reviews on IMDb mention this. Many saying things like "I can't believe critics are putting this on such a pedestal giving it such rave reviews," "I'm beginning to think critics are paid off," and "obvious bot accounts, not only inflating the IMDb score, but also downvoting negative reviews."
So, based on this, I thought someone should make a point of sharing their honest opinion of the film, and that person is me and sadly, I am not being paid off by Universal.
Warning, the spoilers start below the trailer...

SPOILERS: This review contains spoilers throughout

There are a lot of positives and the movie was an enjoyable watch throughout, but sadly after the ending I left the cinema feeling a little let down.
The movie's brave opening consists of little more than a three minute shot of some rabbits in cages, but my attention was held by an incredible piece of original music by American composer, Michael Abels.
After this we meet a family, who are soon to be terrorised by a group of doppelgängers. The movie is beautifully shot and the storytelling is a brilliant mix of horror and thriller peppered with a few moments of comedy, which had the audience laughing for all the right reasons.
The characters are likeable and stunningly portrayed, especially by the very talented and beautiful Lupita Nyong'o. She plays Adelaide, the mother of two kids. Her children, played by Shahadi Wright Joseph (Zora) and Evan Alex (Jason) also put on a strong performance. Their on-screen dad (Winston Duke) is well cast, but fails to shine so brightly in his role as really he just provides comic relief... albeit effectively.
The horror sequences are good, the movie avoids a lot of the lazy cliches of the genre, and it firmly held my attention for the whole one hour and 56 minutes. Despite these positives, the movie fell flat and that was entirely due to the ending and the twist, which is weak at best.
Here's the spoiler. At the end of the film it is revealed that the duplicates of the lead family are just four of an army of clones living secretly underground. This is where it gets a little bit hard to swallow as we are supposed to believe that there are six million of these people (enough to join hands across America) living in a network of tunnels and the sewers. Some how this civilisation has never been found, even though you can access one of their hideouts from a fairground ride in Santa Cruz.
Despite living in secrecy and isolation for more than three decades, these underlings seem to have access to clean red boilers suits, an unlimited supply of rabbits and a pair of golden scissors each. They live in a sterile and clean environment, which is well maintained and free of rotting rabbit remains. So presumably they have waste and maintenance teams amongst their numbers. Not to mention running water, electricity and enough medical facilities to keep the huge population healthy.
In a flashback we see these subterranean clones mimicking the action of their counterparts on the surface. We see them being forced to endure imaginary rollercoasters and waltzers. Then, suddenly this tether to their doppelgänger seems to have vanish. The clones for an unexplained reason no longer copy those above... with the exception of Jason's clone, Pluto - who does seem to copy him sometimes when it's convenient to the plot.
Once this tie is broken, all six million of these underground folk, who have no spoken language, are able to plan a coordinated attack at a specific time, despite the fact they have no means of communication.
How would they even share a basic bit of information like the date and time of their uprising?
The revelation that these people live underground at the end of the movie is jarring. It's hard to understand how their subterranean world works. When the young Adelaide won a t-shirt at the fairground, her clone underground received the same t-shirt. Do these items spontaneously appear? If so, why are they forced to eat raw rabbit? Does food not spontaneously appear too?
Apart from Lupita's performance, the one thing to take away from this movie is its memorable soundtrack. From the opening credit to the finale, the soundtrack delivers more than you'd expect from a horror movie, while still holding true to some of the classic musical cues found in all the best horror movies.
The unlikely standout track being the Luniz's 1995 worldwide smash 'I Got 5 On It'. The song features heavily throughout the movie, but it's the emotive full-orchestral version in the finale that steals the show. There's also a very cool 'Tethered Mix' in the end credits which ties together the original track and the darker, more sinister orchestral version.
Seeing 'Us' at the cinema wasn't a bad way to spend a Friday night, as I said previously it was enjoyable throughout with many positives, but it was hard not to walk away feeling a little cheated by the ending.
Tags:
movieshorrortopical