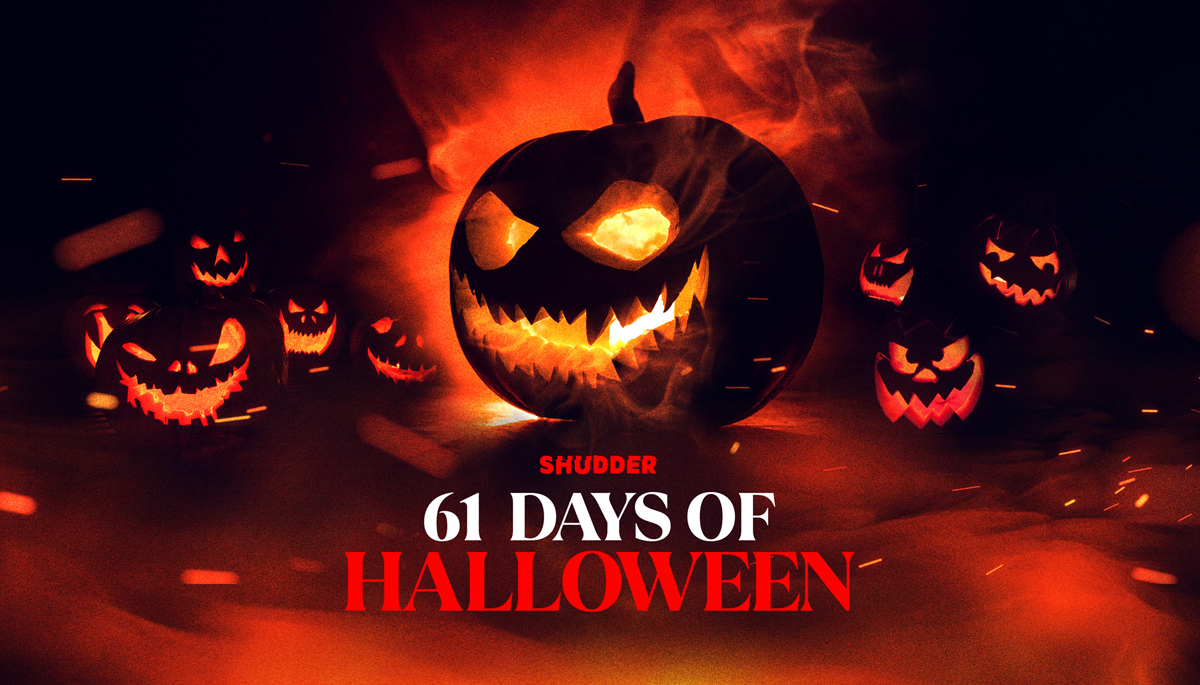 The premium streaming service, Shudder, serves up its biggest and most ambitious lineup with 61 Days Of Halloween throughout September and October 2021.
Shudder brings fans of horror, thrillers and the supernatural the best selection of entertainment in the genre and they've upped their game for Halloween. Shudder's ever-expanding library of film, television series, and originals is available on most streaming devices with a seven day free trial.
Lookout for new seasons of 'Creepshow', 'The Boulet Brothers' Dragula' and 'Behind The Monsters', plus a selection of movies including 'Superhost', 'Martyrs Lane', 'Séance', 'V/H/S/94', 'The Medium' and 'Horror Noire'.
The most wonderful time of the year for Shudder kicked off in September with its annual 61 Days Of Halloween event, featuring a slate of weekly new movie premieres and original series debuts, a new Halloween special with Joe Bob Briggs, horror film favourites added to the Shudder library from Brian De Palma's 'Carrie' to Tobe Hooper's 'Poltergeist'.
Shudder also brings lovers of Halloween 'The Ghoul Log' a 24/7 streaming jack-o'-lantern, and the return of their Halloween Hotline, where members can receive live, personalised movie recommendations from Shudder's head curator Samuel Zimmerman.
"Shudder is the ultimate destination for horror all year long, but every Halloween, we try to outdo ourselves. Last year, we supersized the season, expanding our celebration to 61 days, and this year, we're going even bigger by bringing Shudder members an unbeatable lineup of new original series and exclusive movie premieres every week, along with new specials and timeless horror favorites, starting September 1. Whatever you're in the mood for this Halloween—old or new, creepy fun or truly terrifying—Shudder has you covered," said Shudder General Manager Craig Engler.
Below are the programming highlights for 61 Days Of Halloween, with additional specials to be announced.

'Superhost'
Premieres September 2
In Superhost, travel vloggers Teddy (Osric Chau, Supernatural) and Claire (Sara Canning, Nancy Drew) share their experiences in and around vacation homes with their subscribers while maintaining a moderate level of internet fame. When their follower count starts to dwindle, they pivot to creating viral content around their most recent host, Rebecca (Gracie Gillam, Z Nation). With all eyes turned towards their “superhost,” Rebecca, they slowly start to realize something isn’t right and as they investigate further, they unlock a horrifying truth. Written and directed by Brandon Christensen (Z, Still/Born). Starring Chau, Canning, Gillam and Barbara Crampton (Jakob’s Wife).
'Martyrs Lane'
Premieres September 9
In this unsettling ghost story, Leah, 10, lives in a large, old house with her family but can’t quite work out why her mother seems so distant. At night she is visited by a mysterious guest, who might be able to give her some answers. With a new challenge every night, Leah is rewarded with bits of knowledge that, when pieced together, threaten to shine a dangerous light on both the truth in her nightmares and of the world she lives in. Directed by Ruth Platt (The Lesson). Starring Denise Gough (Colette, The Kid Who Would Be King), Steven Cree (Outlaw King, A Discovery of Witches), Kiera Thompson (His Name Was Gerry) and Sienna Sayer (Silent Night).
'Séance'
Premieres September 29
Camille Meadows is the new girl at the prestigious Edelvine Academy for Girls. Soon after her arrival, six girls invite her to join them in a late-night ritual, calling forth the spirit of a dead former student who reportedly haunts their halls. But before morning, one of the girls is dead, leaving the others wondering what they may have awakened. Written and directed by Simon Barrett (You’re Next, The Guest). Starring Suki Waterhouse (Assassination Nation, The Divergent Series: Insurgent), Madisen Beaty (Once Upon a Time… In Hollywood, The Curious Case of Benjamin Button), Ella-Rae Smith (Into the Badlands, Fast & Furious Presents: Hobbs & Shaw), Inanna Sarkis (Boo 2! A Madea Halloween, After Franchise),  Seamus Patterson (Channel Zero) and Marina Stephenson-Kerr (Channel Zero).
'V/H/S/94'
Premieres October 6
A Shudder Original Film, V/H/S/94 is the fourth installment in the hit horror anthology franchise and marks the return of the infamous found footage anthology with segments from franchise alumni Simon Barrett (Séance) and Timo Tjahjanto (May the Devil Take You Too) in addition to acclaimed directors Jennifer Reeder (Knives & Skin), Ryan Prows (Lowlife) and Chloe Okuno (Slut). In V/H/S/94, after the discovery of a mysterious VHS tape, a brutish police swat team launch a high intensity raid on a remote warehouse, only to discover a sinister cult compound whose collection of pre-recorded material uncovers a nightmarish conspiracy.
'The Medium'
Premieres October 14
A documentary team follows Nim, a shaman based in Northern Thai, the Isan area, and encounters her niece Mink showing strange symptoms that seem to be of inheritance of shamanism. The team decides to follow Mink, hoping to capture the shaman lineage passing on to the next generation, but her bizarre behavior becomes more extreme. From director Banjong Pisanthanakun (Shutter) and producer Na Hong-jin (director of The Wailing). Winner Best Film, Bucheon International Film Festival 2021.
'Horror Noire'
Premieres October 28
A new Shudder Original anthology film, Horror Noire is a follow-up to the critically acclaimed 2019 documentary Horror Noire: A History of Black Horror and features new work from both established and emerging talents, showcasing stories of Black horror from Black directors and screenwriters. Anthology writers featured include Tananarive Due, Steven Barnes, Victor LaValle, Shernold Edwards, Al Letson and Ezra C. Daniels. Cast featured include Lesley-Ann Brandt (Lucifer, Spartacus), Luke James (The Chi, Thoughts of a Colored Man), Erica Ash (Survivor’s Remorse, A Black Lady Sketch Show), Brandon Mychal Smith (Four Weddings and a Funeral, You’re the Worst), Sean Patrick Thomas (Macbeth, The Curse of La Llorona), Peter Stormare (American Gods, Fargo,) Malcolm Barrett (Genius: Aretha Franklin, Timeless) and Rachel True (The Craft, Half & Half), among others.

'Slasher: Flesh & Blood'
New episodes premiere every Thursday from September 16
Slasher: Flesh & Blood follows a wealthy, dysfunctional family lead by patriarch Spencer Galloway (David Cronenberg) that gathers for a reunion on a secluded island only to learn they’ll be pitted against one another in a cruel game of life and death, all while being stalked by a mysterious masked killer. Nothing is what it seems and no one is safe as the tension – and body count – ratchets up.
'Creepshow' Season 3
Premieres September 23
Based on the 1982 horror comedy classic, the anthology Creepshow returns for a third season and is still the most fun you’ll ever have being scared! From showrunner Greg Nicotero (The Walking Dead), a comic book comes to life in a series of vignettes, exploring terrors ranging from murder, creatures, monsters, and delusions to the supernatural and unexplainable.  You never know what will be on the next page. Guest stars include Michael Rooker (The Walking Dead), James Remar (Dexter), Johnathon Schaech (Legends of Tomorrow), Reid Scott (Veep), Hannah Fierman (V/H/S), King Bach (When We First Met) and Ethan Embry (Empire Records).
'The Boulet Brothers' Dragula' Season 4
Premieres October 19
The groundbreaking Shudder Original series follows ten drag artists from around the world competing for a $100,000 grand prize – the largest in show history. Season four will feature a spectacular lineup of guest judges including Vanessa Hudgens (High School Musical film series), Harvey Guillén (What We Do in the Shadows), Kristian Nairn (Game of Thrones), Misha Osherovich (Freaky), Queer country music icon Orville Peck, pop metal star Poppy, Ray Santiago (Ash vs. The Evil Dead), Bob the Drag Queen (We're Here), and more, with additional judges to be announced later. Dubbed one of “the 19 best LGBTQ+ shows everyone needs to watch” by Cosmopolitan, The Boulet Brothers’ Dragula is written and produced by the Boulet Brothers with Executive Producer David Sigurani and director Nathan Noyes.
'Behind the Monsters'
Premieres October 27
The new original docu-series Behind the Monsters takes a deep dive on cinematic horror icons, including Freddy Krueger, Jason Voorhees, Michael Myers, Candyman, Chucky and Pinhead, and features interviews with horror experts and the writers, directors and actors from the original films that made each character the stuff of genre legends. Written and directed by Gabrielle Binkley and Anthony Uro and produced by Stage 3 Productions, Behind the Monsters is executive produced by Phil Nobile Jr., Kelly Ryan and Mark Shostrom.

'Joe Bob's Halloween Hoedown'
October 8 on Shudder TV
In what has become an annual tradition, iconic horror host and foremost drive-in movie critic Joe Bob Briggs returns with a special The Last Drive-In double feature just in time for Halloween, premiering live on the Shudder TV feed. You’ll have to tune in to find out what movies Joe Bob has selected, but you can count on something scary and perfect for the season, with special guests to be announced.
'The Ghoul Log - 2021 Edition'
'The Ghoul Log' is Halloween’s answer to the Christmas yule log, a 24/7 streaming jack-o'-lantern providing the perfect ambience for all your Halloween festivities. Fan favorites 'The Ghoul Log' and 'Return Of The Ghoul Log' are back, along with a spooky new edition for 2021 premiering October 1.
'Shudder's Halloween Hotline'
Every Friday in October
Members are invited to call Samuel Zimmerman, Shudder’s head of programming, to discuss all things horror: from their favorite genre films of all time to the most highly anticipated horror releases of the year.  From those conversations, Sam will then use his horror expertise to offer customized viewing recommendations from Shudder’s expansive film collection.
Tags:
televisiontopicalhalloweenhalloween 2021