How To Cleanse Your House With Burning Sage 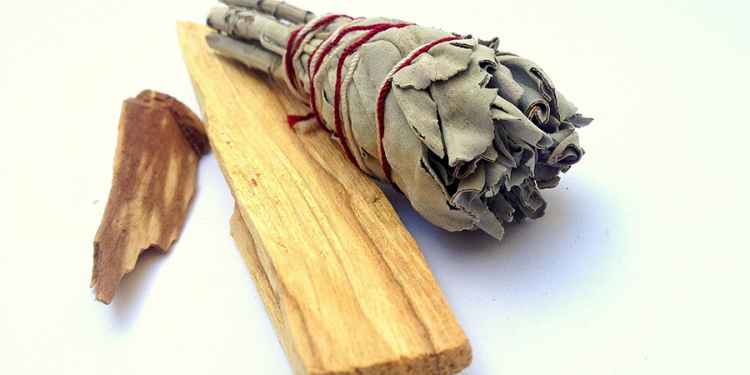 Photo: pixabay.com
Sage has a long history of medicinal and culinary use, in modern times it has been used as an ornamental garden plant, but today it's commonly used for smudging. This is most often performed with white sage, as part of many belief systems, including Neopagan spirituality, such as modern Wicca and as part of paranormal investigations.
Sage has been burnt by many Native American traditions for centuries to aid spiritual healing, perhaps due to its natural anti-bacterial properties, its smoke is said to clear bacteria out of the air. Some research has suggested certain extracts of sage may have positive effects on human brain function. Sage smoke is also said to be an odour remover and a bug repellent.
Smudging involves burning dried sage, it is believed that the smoke can purify a space and drive away negative energy. It is said to be a form of ritual alchemy, the smoke filling the air element is said to connect humans better with the spiritual world around them. It is rooted in the similar tradition of burning incense, which can be traced throughout the East in parts of Asia and even dating as far back to Ancient Greece.
Sage can be bought in a pre-wrapped bundle of dried herb, known as smudge sticks, this is a better option than buying loose-leaf sage as it is easier to burn. You can also grow and make your own smudge sticks. You'll find smudging sticks for sale online or anywhere that incense is sold.
Smudging is normally carried out when moving into a new home, before and after a guest enters your house, before meditation, in a reportedly haunted location, or before and after a séance or occult ritual. It can also be used to clear the air of negative vibes after an argument, or for a fresh start after an illness or after receiving bad news. It may also help if you are preparing for a big life change, or when staying somewhere unfamiliar. If you're feeling tired, drained, moody or even fearful, burning sage can help.

How To Smudge Your Home

This guide will teach you the best way to smudge your home, office, car or any other space in order to remove negative energy.
Smudging is an ancient ceremonial ritual which differs by culture. Many of these traditions have been forgotten and may not be in line with your beliefs, so it's best to come up with your own ritual that you are comfortable with that means something to you.
To ensure smudging is your own meaningful ritual, smudge your home at a time when you won't be disturbed, and perform your ritual slowly, with full awareness and mindful manner. You should allow at least 10 to 15 minutes to complete the ritual.
White sage is most commonly used, you can also uses different varieties of sage like desert sage, Russian sage or mug wort (black sage). You can also use cedar, sweetgrass, and lavender.
Some people start by removing metal jewellery, belts and shoes in order to prepare themselves mentally and spiritually. Next start the ritual by saying a prayer, giving thanks or take a few moments to mentally focus your energy.
Then light the tip of your sage with a match, lighter or candle, then gently wave the smudge stick in the air until the tip begins to smoulder. Throughout the ritual, be aware of glowing embers falling on to the floor.
Most people start by smudging themselves, simply take your smouldering smudge stick and pass it around your body so that the smoke surrounds you. Start with the area above your head and continue down to your feet, breathing deeply as you do.
Once you have smudged your body, it's time to move around your home. Keep a means of lighting the sage with you as you move around the house, as you may find you need to re-light the herb during the session. Most people start at the front door, while others begin at the east or west wall.
Then consistently move in one direction around the building in either a clockwise or anti-clockwise movement, again this is up to you, but don't forget about smaller rooms like utility rooms, ensuite bathrooms and the garage.
In each room fill the whole space with the sage smoke, being sure to let the smoke drift into all corners and dark or shadowy spaces in every room, as it's said that corners can accumulate stagnant energy.
Nowadays people tend to direct the smoke around the room by simply waving their hand through the air to waft it in the direction they want it to go, but traditionally a an eagle or hawk's feather was used. These feathers are now difficult to get hold of, so in modern times a turkey feather is more commonly used.
If you pass an open door or window, waft the smoke outside to carry the negative energies from your home with it. To keep the mood of the ritual, you should focus on the cleansing process during the ritual or recite an incantation that means something to you, either aloud or in your head. One popular incantation is "air, fire, water, earth. Cleanse, dismiss, dispel."
Once you have smudged all areas of your house and returned to the starting point, gently extinguish your sage bundle by stubbing it out on a non-flammable, heat-resistant surface. Let the ashes cool down and then pack it away, it can be used on your next session. You can also return the leftover sage to the earth if you wish.